We ate our weight through Sydney 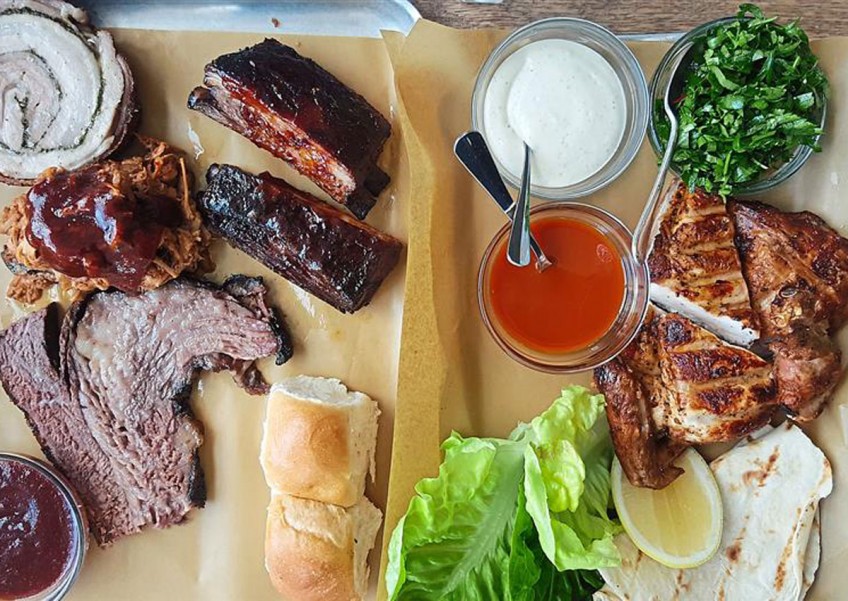 The attendant at the check-in counter at the Sydney International Airport is busy weighing my luggage bound for Malaysia, ensuring that it does not exceed the set 45kg limit.

Little does she know that I am carrying excess weight on board the flight - around my waist - and have carefully concealed it in a thick black jacket. She fails to notice too that my jeans are a little too snug.

Seven days ago, the jeans were loose. But that was before our international media group started to eat our way through New South Wales, home to some of the best restaurants in Australia.

In May, The Financial Review released its list of Australia's Top 100 Restaurants of 2015, and what do you know, 44 of these restaurants are located in New South Wales.

Its capital, Sydney, is home to 25 of them, and on this trip, we got to dine at three of those eateries - Momofuku Seiobo, Ester and Aria.

It's my first trip to Sydney, and it didn't take me long to realise that the dining scene here is as diverse and cosmopolitan as the harbour city itself.

There is an exotic culinary adventure to suit every appetite, and while there are many expensive and indulgent restaurants in the city centre, the real dining scene however, is blossoming in the inner city zones.

Chippendale, for one, is experiencing a rush of interesting new eateries, and continues to see a lot of action.

At the top of its game is Ester, recently crowned by Good Food Guide 2015 as Sydney's Best New Restaurant of the Year.

Housed in a former garage loading dock, a wood-fired oven is at the core of this restaurant's being. However, do not make the rookie mistake of ordering pizza at Ester, lest you feel the wrath of its head chef Mat Lindsay. He is set against entertaining any request for the pies.

Here, the wood-fired oven is used to make classic and simple dishes such as roast chicken with garlic and bread sauce, or Ester's signature roasted half-head of cauliflower, paired with mint and almond sauce.

Last year, Lindsay made the error of omitting the roasted cauliflower from Ester's seasonal menu... well, simply because. He faced the backlash almost immediately.

In an interview with SBS, Lindsay admitted: "It took two weeks before people started complaining. I had to put it back because everyone was asking for it. One table came in for lunch, and left because the cauliflower wasn't on the menu. Sometimes you gotta give the people what they want."

I love everything that Ester has to offer - the speedy service, the attentive waitstaff, the fuss-free atmosphere, and not forgetting the amazing food.

Lindsay's impeccable raw kingfish with burnt mandarin orange and nori charcoal was fresh, slightly tangy and very much addictive. I could not stop at just one slice of the fish. I also love the fragrant and silky roasted oysters, but it is the bone marrow that holds a special place in my heart, literally.

Roasted with an XO sauce crust, the split shin bone was served with charred toast cut from exceptional, rustic house-made sourdough. The artery-clogging marrow effortlessly melted in my mouth, and I could not scoop it out fast enough for my tongue's liking.

I had never had bone marrow prior to this, but now I yearn for the same feeling the fatty, silky matter gave me on the first bite.

Ester's menu centred on simplicity and was a knockout in just about every sense that mattered. Case in point, its dessert - the Three Milks. Made from goat milk dulce de leche, frothed sheep's milk yoghurt and cow's milk pannacotta, with crunched olive oil biscuit and fried rosemary, this dessert alone is worth another trip to the establishment.

Another big believer in wood-fired oven - it is becoming the it way to cook anything in Sydney - is Firedoor, the newest establishement in Surry Hills. This trendy restaurant took four years in the making before it opened in May, and Chef Lennox Hastie surely rewards one's patience with his food.

His daily menu demonstrates simplicity and his skills. Be it salad leaves grilled and served with cured pork and walnuts, dory or gurnard fillets, or dry-aged beef rib, Hastie and his kitchen kin proved that cooking with fire can be precise and elegant.

We loved the refreshing Moreton bay bug tail, balanced upon tart Granny Smith slices and snow pea tendrils with mullet roe puree, and the live marron with finger lime and native herbs. Of course, the star of Firedoor was the 150-day dry-aged, grass-fed beef, served medium rare and sliced. It was a great reminder that good things come to those who waited.

The Mod Oz (modern Australian) laidback style was evident at many eateries in Sydney. This style flourishes at Momofuku Seiobo, located within Sydney's luxury shopping atrium, The Star.

Fuelled by local produce and guided by Asian-European techniques, Seiobo's 10-course degustation is on every Sydneysiders' must-experience list. This is indeed a great place to dine, seen and be seen in this gorgeous harbour city.

Momofuku started over a decade ago as Chef David Chang's noodle joint in Manhattan's East Village. It grew into a small group of restaurants around New York, and Seiobo is Chang's first restaurant outside of the Big Apple. Last month, this restaurant was awarded two Chef's Hats by the Sydney Morning Herald Good Food Guide 2016.

Chef Ben Greeno, who helmed Seiobo's kitchen since its inception in 2011, left earlier this year. Chang then moved Chef Paul Carmichael from his post at Momofuku's Midtown outpost, Ma Peche, to Sydney and appointed him Seiobo's new executive chef. There were initial apprehension to whether Carmichael could fill Greeno's shoes, but the reviews have been positive so far.

Carmichael's take on Greeno's inventions such as grouper with witlof and mustard, duck with rye and swede, crab with corn and chick pea and bug with mushroom and custard, was impressive. At Seiobo, customers can sit back, enjoy funky music and watch the open kitchen as Carmichael conducts the gastronomic symphony, and occasionally stops in his track to answer any questions from the diners at the counter.

"This is koji, and yes, you can eat it raw," he told me, with a smile. Perhaps Carmichael sensed that I was a newbie to the food scene, and had never seen the grain before. He put some in my hand, and very patiently described the benefits of the Japanese cooked rice which had been inoculated with a bacteria culture. Carmichael served the koji with rhubarb compote and yoghurt sorbet, and the combination tasted heavenly.

Seiobo's knowledgeable sommelier helped us match the right New South Wales wine with the food. And as for the food, every dish is an experience with incredible flavour packed into every mouthful.

At Aria, we experienced the same excitement. Co-owner and chef Matthew Moran wasn't working in the kitchen this particular night - we assumed that he was busy filming an episode of Masterchef Australia - but that didn't stop us from enjoying a great meal with a stellar view. Aria's curvaceous dining room overlooks the Sydney Harbour Bridge and the Opera House, and the view alone could be a topic of conversation for hours.

For dinner, Moran had created an a la carte menu that remains true to his ethos of seasonal ingredients.

The dishes are contemporary and proudly showcases Australian produce. Tonight, we got to enjoy a fantastic three-course meal. The roasted lamb was perfect, the duck was succulent and the dessert of raspberries with chantilly cream and vanilla meringue was more beautiful than the scenic view in front of us.

While the "hatted" restaurants impressed us with their use of techniques and each visit was a crash course the dazzling culinary language, it was at Papi Chulo however, that we really got down and dirty.

Papi Chulo - a Spanish slang for "dirty ol' man" - is a smokehouse big on delivering flavoursome food. Smoked, marinated meats are cooked over wood for at least six hours, giving the meat and seafood an intense barbecue flavour.

It serves classic South American dishes such as empanada, perfectly charred seafood, bountiful salads and cocktails, but the barbecue platter is the definite crowd pleaser.

How we cleaned the tray and still managed to find space for the chicken wings, roasted chicken, and grilled jumbo prawns and lemongrass dressing, remains a mystery.

The seafood was huge, fresh, and tasted like heaven. Located at the water's edge on Manly Wharf, Papi Chulo is the perfect day-to-night destination for food lovers.

At the end of the trip, we realised that everywhere we went in Sydney, there was a place that fed our tummies well.

We heartily enjoyed the sea breeze and harbour views, but more so, the oh-so-delicious food. So we gained some weight. On my next visit to Sydney, I'll bring bigger pants.