Where the charm of old Dubai continues to enthrall 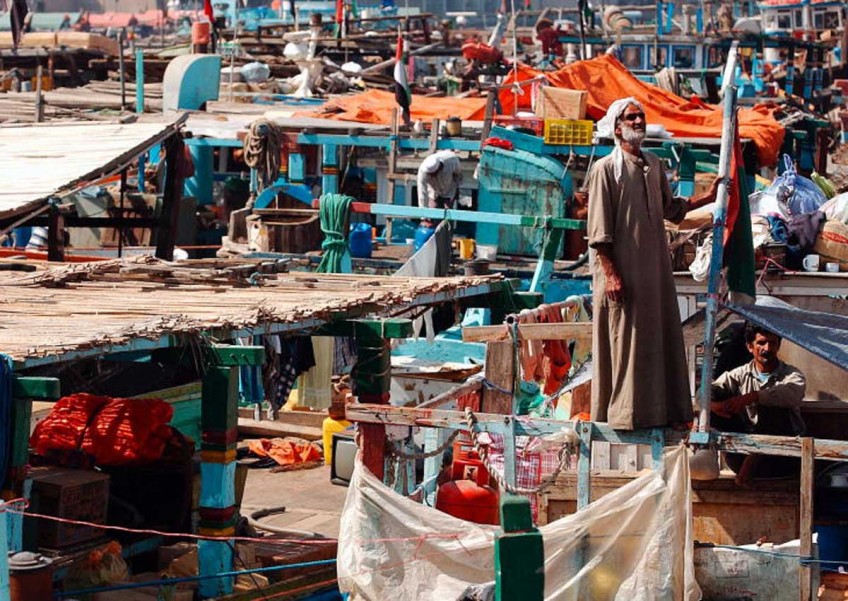 Boatmen on traditional Dhows by the Creek. [Once a sleepy fishing port, Dubai, the second largest of the seven emirates which make up the United Arab Emirates, has been transformed into one of the world's fastest developing cities in just 50 years.]
The Straits Times

Long before The Palm Island was put on the map and the Dubai Marina was dotted with upscale yachts and boats, there was one main waterway in Dubai, the Dubai Creek, joining two of the city's oldest neighbourhoods - Deira and Bur Dubai.

In contrast to Dubai's more recent and luxurious developments that thrive on pulling in more tourists, these areas, having escaped excessive retouching, still bear some semblance to the city's early life.

For a change of scenery from gleaming glass high-rises to coral and mud stone houses with wind towers, my two friends and I took the squeaky-clean train heading to Al Fahidi in Bur Dubai, avoiding the usual traffic in the busy area.

We started off our tour of old Dubai with a brief history lesson at the Dubai Museum, which is housed within the walls of the restored Al Fahidi Fort, built in the late 1700s.

The museum is worth a visit for its wax statues and interactive displays that give a background into how Dubai and its six sister emirates came together to form the United Arab Emirates in 1971.

At the back of the museum is the Grand Mosque, open only to Muslims, and behind the mosque is the Hindi Lane that's home to temples for Hindus and Sikhs, as well as numerous small shops selling garlands, bindis, and other paraphernalia used in worship.

Walking out of the alley, we knew we were approaching the Bur Dubai Souk as the crowds and number of shops started to multiply and the smell of herbs and spices became stronger.

You'll be hard-pressed to find many locals around in the area; as is the case with most of the city, you'll see a mix of nationalities that have influenced and shaped the Emirati culture over the years.

Most of the shopkeepers are South Asian but have picked up enough Arabic and English to market their prices as "the best you'll get".

We stopped at one of the tea shops, where the seller told us reassuringly that he won't charge us "anything extra", adding that he saves the most exorbitant prices for the foreigners.

The shops at the souk sell everything from rugs and knock-off designer wear to spices and ceramics. Pakistani and Indian snacks, such as pakoras and dosa, are popular among the locals as well as visitors, and are sold at small cafeterias along with fresh juices and the famous karak chai.

Since the souk runs parallel to the creek, we stopped at the Creekside cafe and found a table by the water to have a cold lemon and mint juice while taking in the view of the abras (traditional boats made of wood) against the backdrop of Deira's old buildings.

A few steps away from the Creekside cafe is Bayt Al Wakeel ("Agent's Home" in Arabic), one of the oldest houses in Dubai that was built in 1935.

Earlier a shipping office, the building now functions as a restaurant that serves Arabic food - and while the food isn't anything exceptional, the view from the jetty that has been transformed into a dining terrace certainly is.

The manager was nice enough to let us explore the inside of the building where pictures showing the creek and Bayt Al Wakeel in their original form have been put up.

We found an abra station just a few steps away from Bayt Al Wakeel to cross over to Deira; the five-minute ride took us past the traditional houses, wind towers and minarets into the heart of Deira, where we stopped by the Spice Souk and the Gold Souk.

Tired from our souk-hopping, we called it a day, got juicy shawarmas from Ashwaq Cafeteria (one of the best in town) for dinner, and decided to return to Bur Dubai the next day.

Day two started with breakfast in the Al Fahidi Historical Neighbourhood (also known as Bastakiya); we got off at the same metro stop and walked past the Dubai Museum towards Al Fahidi street to the Arabian Tea House, where we had the Arabic breakfast tray with hummus, fried halloumi cheese, and olives -the holy trinity of local cuisine.

A number of eateries have cropped up in the neighbourhood but be wary of tourist traps (an elaborately decorated camel outside is an easy giveaway); if you don't mind being touristy, then the Sheikh Mohammed Centre for Cultural Understanding will take you on a tour of the area and host a traditional breakfast for you, complete with Emiratis to converse with.

In contrast to the bustling and noisy souk, this preserved quarter is quiet and you don't feel hassled to rush through the alleys. Built in the mid 1800s, Al Fahidi is one of the city's oldest heritage sites where you can get a sense of the life of the early Emiratis.

Traditional courtyard houses made of coral or sea stone and mud are marked with the wind towers (barjeel), which allow hot air to rise out and cooler winds to flow down.

Today, the neighbourhood has become an art hub with many houses having been converted into cafes and art galleries, and it is also the venue for the annual Sikka Art Fair that usually takes place in March during Art Season.

We made our way through the labyrinth, stopping at the XVA Hotel and Gallery, Make Art Cafe, Coffee Museum, Art Connection, Mawaheb Art Studio (for artists with special needs), and anything else which looked remotely interesting.

All the places welcome visitors who are not necessarily customers, so you can walk in and roam about without feeling the need to buy anything.

You can also see a small portion of the Bur Dubai wall, dating back to 1800 A.D., in the area and for the history buffs, there's a Restoration House, dedicated to preserving original architecture and artefacts, where I saw some gorgeous traditional, wooden doors.

One of the best ways to get an idea of how Dubai has changed over the years is to strike up a conversation with the shopkeepers or the abra drivers, many of whom have been in the city for decades.

In the evening, we went back to the Creekside cafe to watch the sun set over the abras, which went about their routes as they have been for years, taking commuters across the creek for a mere one Emirati dirham.