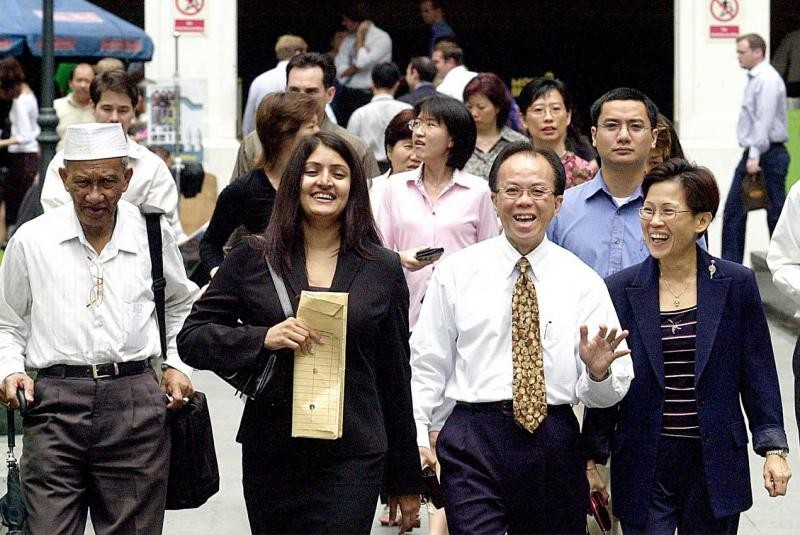 My late father Sim Lian How was a low-wage shop assistant who worked for 37 years at a provision shop. He initially earned $90 a month and when he retired, his pay was $350. The pay increase hardly covered inflation in those 37 years.

Despite the low wages, my father worked very hard delivering groceries to families in Housing Board flats. Back then, lifts often broke down and he would have to climb up to 10 storeys to deliver wooden crates of bottled drinks and sacks of rice, plus other canned food. In any case, the lift stopped at only three levels: 1, 5 and 8.

Things got particularly difficult during festive seasons when orders were aplenty. As age caught up and his physical strength deteriorated, falling from stairs and getting cut by broken glass bottles became more frequent. But each time he was hospitalised, he would try to get himself out quickly to resume work, even before he had fully recovered from his injuries.

I could not understand that level of diligence and tenacity when he was barely earning enough to feed his family.

One day when he was hospitalised again, I asked my father, then 65, to retire. But he refused, explaining that his boss was old and the boss' son was too young to take over the business.

When I insisted on his retirement, I told him: " You just work there. You don't own the shop."

But his reply was something I will never forget: "I worked for 37 years at this shop. My boss trusts me enough to let me take care of everything here. If this is not my shop, whose shop is it?"

I was shocked into the realisation that this was not just a matter of a job. This was his life story. And he did not have another 37 years to spend on another story.

It dawned on me then that real ownership is having the power to make decisions. Both his boss and son did not run the shop. He did.

Being a shareholder does not bestow real ownership if you cannot make any decisions.

Many Singaporeans own Singtel shares but we cannot make any decisions at Singtel, even if we can vote at shareholder meetings. We still have to queue up at the shops like everyone else.

This lesson taught me that if you want to motivate your employees, you have to trust them to make decisions and take full ownership of not just their portfolios but the entire vision of the whole organisation.

When the right people are given authority to take charge, you also employ much fewer people, communication is more direct, and innovative decisions are swifter.

I also realised that if people are energised and always busy, they have no time to play politics. It is often those who are redundant or incompetent who will spend a lot of time creating negative drama.

So the solution to productivity is to trust people enough to throw them into the deep end of the water and let them swim. Work becomes fulfilling when you are accountable and given ownership of decisions.

In today's fast-paced work environments, we need flat organisational structures and people who are deeply immersed. People do not work for money alone. They need to be happy and spiritually energised to deal with all the daily challenges.

At 40, after running 16 successful businesses, I decided to retire to devote the rest of my life to social work.

I asked my general manager to take over the helm and to decide everything on his own without asking me for instructions in future.

My peers questioned my decision. They asked me, what if my successor made mistakes and left? I told them it is impossible not to make mistakes. I made lots of mistakes. The key is to find people who will take full ownership of the business, so that they are constantly adapting and trying new ideas, and when mistakes happen, they take their own initiative to quickly remedy them.

In short, their jobs belong to them and not you.

It's now been 19 years since I left and the company is doing well, and my successor is still at its helm.

Similarly, at the World Toilet Organisation where I now work, I entrusted my pals from school days to manage the office so that I can travel 60 per cent of the time and go overseas to work on global sanitation and poverty alleviation.

The key lesson is this: Trust is one of the greatest gifts you can give to others, and they'll love you for this gift and reward you abundantly.

This article was first published on June 16, 2016.
Get a copy of The Straits Times or go to straitstimes.com for more stories.