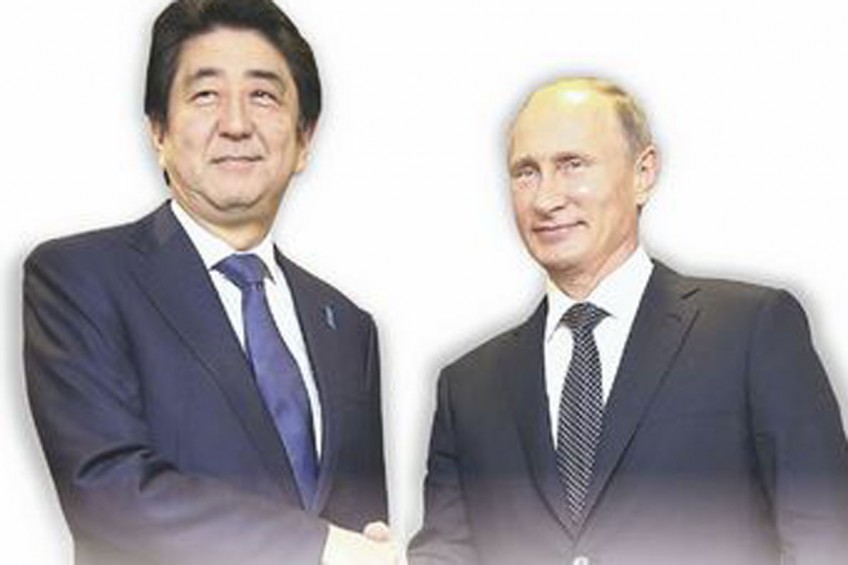 This is the seventh and final instalment of a series on Prime Minister Shinzo Abe's politics.

Two diplomatic issues remain unresolved for Japan despite the passage of 70 years since the end of World War II: the normalisation of diplomatic ties with North Korea and the dispute with Russia over the northern territories.

As no progress is in sight regarding Japan-North Korea talks, diplomatic strategy toward Russia is increasingly important.

Since taking office, Abe has consistently stated an interest in reinforcing relations with Russia. In addition to the conflict in Ukraine, however, Syria has become a source of deepening confrontation between the United States and Russia.

On Sept. 30, during an international conference on refugee aid held at UN headquarters in New York, a man approached Foreign Minister Fumio Kishida while the minister chatted with other participants, calling out "Fumio!" and hugging him. It was Russian Foreign Minister Sergey Lavrov.

Nine days earlier at their bilateral ministerial meeting, Kishida had met with frustration due to Lavrov's hard-line attitude toward the northern territories issue. Lavrov's about-face bewildered Kishida, though he also had a sense of how Lavrov felt at the time of the meeting. Kishida believed that the Russian foreign minister felt isolated.

In the wake of Russia's annexation of the Crimea in southern Ukraine, the United States and European countries have continued economic sanctions on Russia.

Russia also recently began airstrikes in Syria. The action is in support of the Syrian administration of President Bashar Assad, who is close to Russia, but the Assad administration's reputation for suppressing its citizens is well known. Western nations have thus adopted a cooler attitude toward Russia.

In the midst of this situation, the United States is apprehensive about Japan taking an independent diplomatic approach to Russia. Japan is forced to walk a tightrope, taking concerted action with the United States, which is piling up pressure on Moscow, while also maintaining friendly ties with the administration of Russian President Vladimir Putin.

On Oct. 5, Akitaka Saiki, vice minister for foreign affairs, held a working dinner in Tokyo with US Deputy Secretary of State Antony Blinken. To gain the confidence of US officials, Saiki told Blinken: "Japan will host next year's [Group of Seven] summit meeting. Japan will fully understand its own position before reacting to Russia. So please don't worry."

Abe has held several summit meetings with Putin aimed at fostering better relations. In April 2013 he visited Russia for the first time in his second stint as prime minister. At a luncheon between the two leaders, glasses of wine bottled in 1855, near the end of the Edo period, were served during the last course.

The luncheon also saw Putin present Abe with a map of Shimoda on the Izu Peninsula, the location of the 1855 treaty negotiations. Sources accompanying Abe at the time said Putin seemed enthusiastic about improving ties with Japan.

Russia's economy has been stagnant, partly due to a fall in the price of crude oil. Hopes are therefore high within Russia for investments from Japanese companies that could spark a recovery. At least one Abe aide has been enthusiastic, saying, "Now Japan can have an advantage in negotiations."

However, the reality is not so rosy. At the vice foreign ministerial meeting that resumed on Oct. 8, Russia's hard-line attitude meant that not even the schedule of the next meeting could be agreed upon. Putin's visit to Japan, which Abe and Putin agreed to realise by the end of this year, will likely be postponed.

Abe's diplomatic policy is reaching a turning point. For the time being, the prime minister intends to improve relations with not only Russia but also other neighbouring countries, including China and South Korea. Improving relations with these two nations will be no easy task, given the complicated historical issues that need to be resolved.

■ Treaty of Commerce and Navigation between Japan and Russia

The treaty was signed by Japan and Russia on Feb. 7, 1855, in the Shimoda area of the Izu region, which is now Shimoda, Shizuoka Prefecture. The treaty confirmed that a national border between the two countries lies between Etorofu Island and Urup Island. According to the Foreign Ministry, Japan discovered and conducted research on the northern territories earlier than Russia, and established Japan's effective rule of the four islands in the early years of the 19th century at the latest.