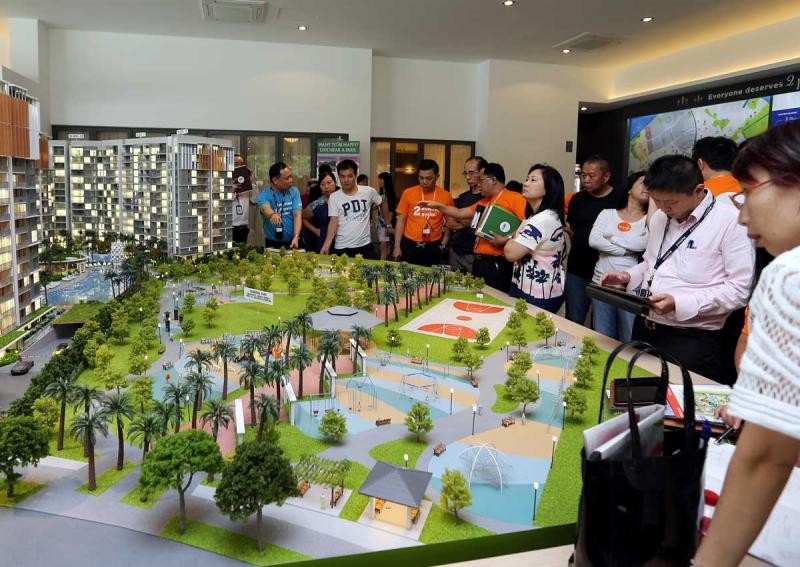 The 632-unit project, launched earlier this month, received 859 applications when e-applications closed on Sunday, Qingjian said in a statement yesterday.

The balloting and booking of units at The Visionaire is due on Saturday. Qingjian said prices of apartments will be unveiled on Thursday.

As a guide, it noted that the indicative prices will be consistent "with what the market expects for an EC, with prices for a standard three-bedroom unit ranging from $678,000 to $888,000".

Qingjian said the "biggest draw" of The Visionaire in Canberra Link lies in its proximity to the upcoming Canberra MRT station, based on a survey conducted among 200 applicants.

It added that its smart-home concept, which features devices that residents can access remotely via mobile applications, also appealed to some potential buyers.

The other EC project in the area, the 628-unit Parc Life in Sembawang Crescent, also attracted a healthy crowd when its showflat opened on Saturday, and it received 220 e-applications over the weekend, Frasers Centrepoint told The Straits Times yesterday.

The Visionaire, in contrast, garnered more than 400 e-applications on the first weekend after its launch on April 8.

Parc Life is near Sembawang MRT station and next to Canberra Park.

Frasers Centrepoint said half of the applicants are first-time buyers and the rest are HDB upgraders.

Ms Xu Li Zhen, who was at the Parc Life showflat with her husband and three children on Saturday, was looking to upgrade from their flat in Woodlands. "Now is a good time because there are more ECs in the market, so the price is lower. I think as long as it is less than $800 per sq ft, it's reasonable," Ms Xu, 33, told The Straits Times.

Average unit prices at Parc Life, jointly developed by Frasers Centrepoint and Keong Hong Holdings, range from $770 to $800 psf. E-applications will close on April 24, with booking due on April 30.

Analysts say although e-applications may be an indicator of demand, they do not necessarily translate into sales.

"In the EC launches in the past year, there seems to be many people eager to submit e-apps but who are merely window-shopping. The conversion to sales from e-apps is under 30 per cent on average," said Century 21 Singapore chief executive Ku Swee Yong.

SLP International Property Consultants executive director Nicholas Mak said: "Pricing is still a major determinant. Some people may drop out because they find out that the unit they want is beyond their budget. The pricing sweet spot for EC is about $730 to $800psf."