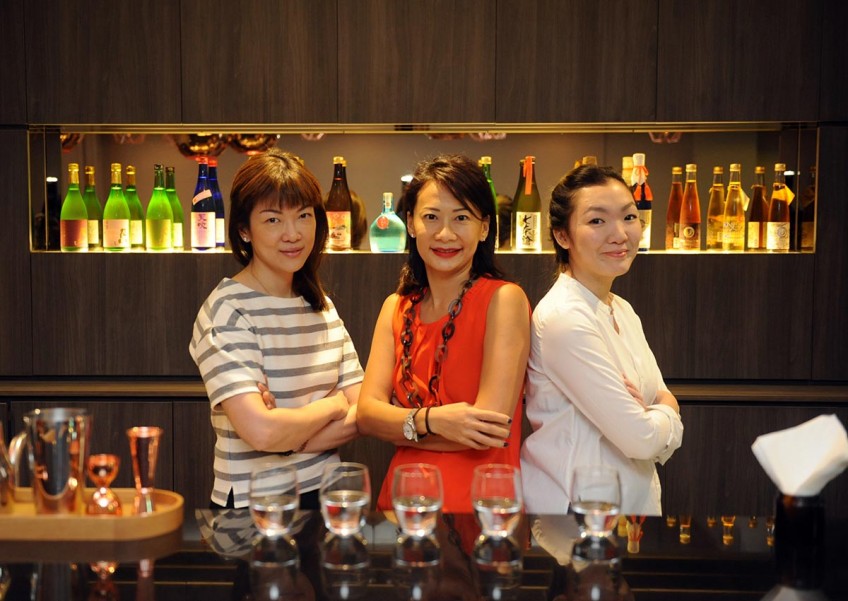 SINGAPORE - When it was time for Ms Karen Teoh, 38, owner of the popular Fu Lin Yong Tofu chain, to renew the lease of her five-year-old shop in Telok Ayer Street, she overhauled the nondescript coffee shop.

Besides renovating it to give it a hip industrial look with exposed brick walls and metallic wall decor, she also re-named it Fu Lin Bar & Kitchen when it re-opened two months ago.

From 10am to 3pm, the eatery still dishes out its signature yong tau fu. But while Ms Teoh used to close shop at 4pm, the eatery now morphs into a tapas bar serving tipples and small plates at night.

She hired chef Warren Poh, 30, who used to work at Spanish fine-dining restaurant Catalunya, to come up with dishes such as Iberico steak with cucumber salad and crab risotto.

"This area used to be dead at night. But in the past two years, the neighbourhood has become livelier with the spillover crowd from Ann Siang Hill, so we want to attract diners who want to chill out with bites and drinks," she says.

Fu Lin Bar & Kitchen is one of at least three F&B establishments with dual concepts that have opened in the past year. They offer different food and ambience in the day and night. Another one is due to open this week.

The new eateries join Bincho in Moh Guan Terrace in Tiong Bahru, which serves mee pok in the day and turns into a yakitori bar at night; and Dapper Coffee cafe and The Spiffy Dapper Bar that operate in the same space in Amoy Street.

Sake bar Copper on Stanley in Stanley Street, which opens on Wednesday, will share a 900 sq ft shophouse space with Crack & Press, a cafe selling sandwiches and eggs-centric dishes "with Japanese elements", in the day. The cafe will open next month.

Co-owner Gwen Lim, 41, roped in her friends - former bartender Felicia Koh, 28, of B28 and Symmetry bars, and Ms Dawn Lim, 43, a housewife - to run the bar and cafe respectively.

Ms Gwen Lim, who also owns Patisserie G, says it makes "commercial sense to tailor to the dining needs of the foot traffic".

Crack & Press will serve the office crowd looking for breakfast bites, and come 5pm, the 36-seater cafe will turn into a sake and cocktail bar serving small plates to pair with 120 types of sake. "This arrangement allows us to be more nimble in adjusting menu offerings to cater to customers' demands," says Ms Lim.

She adds that sharing spaces is a cost-efficient way of tinkering with new dining ideas. "The rent is split among us. We can also share resources such as a chef who works in the day and prepares the ingredients for the evening menu, cooking equipment and even drinks."

It is also easier to hire service staff, she adds, as the working hours are shorter.

Over in Tuas industrial estate, Third Place @ Tuas 7, which opened in July, transforms from a cafe-style foodcourt, with 12 stalls offering hawker fare, into a full-service zichar restaurant and bar at dinner time.

Mr Vincent Tan, 51, managing director of Select Group, which runs the eatery, says: "Having a dual concept is a colourful addition to the few dining options in Tuas and we can meet different diners' needs - we have the working crowd and also the after-work crowd, who want a more relaxed ambience."

He says more than 1,000 people visit the foodcourt during lunch daily, while dinner time is quieter, with about 80 diners daily, consisting mostly of families and returning lunch customers.

The transition from day to night operation is seamless - roller blinds cover the stalls in the evening and a central kitchen in the 12,000 sq ft space is used.

At Eng Hoon Street in Tiong Bahru, a two-year-old eatery, Day & Night Bistro - which was formerly known as Two Face Pizza & Taproom and underwent a change in management in January - shares space with a 30-year-old coffee shop which sells yong tau fu and pasta in the morning.

At night, the bistro serves burgers, pizzas and pastas, and has a more extensive tipple list with cider on tap and mocktails.

Co-owner Steph Koh, 50, says: "We can't treat the place like it is ours and we've to keep it clean and tidy and ensure that cooking equipment is kept in place so that the morning operations are not affected."

Most diners who have patronised these eateries tell Life they are aware of the dual concepts, but some do not want to dine at the same place for lunch and dinner.

Sales officer Jeffrey Soh, 38, who works in Tuas, says: "I've been working here for a decade and it is a dead place at night. Most workers want to get out of this area after work."

Engineer Karigalan Segaran, 40, says that Third Place @ Tuas 7 has a more relaxed ambience in the evening, but notes that it "may be difficult to sustain in an area dominated by blue-collar workers".

Perhaps location does make a difference. Sales executive Jayce Tan, 28, who works in the CBD and lunches at Fu Lin Bar & Kitchen, is keen to try its night-time menu. "It is an interesting concept and the pairing of the tapas and drinks sounds adventurous," she says.

What: This cafe by day, sake bar by night, will open in parts. The bar, Copper on Stanley, opens on Wednesday, with about 120 sake labels such as Amabuki Ringo (apple yeast sake) and Shichi Hon Yari Tamasakae (from $7 a glass). Customers can sample them from a dispensary machine before buying. There are also cocktails ($22), such as a sake-based one with pomegranate and elderflower liqueur. Pair the tipples with small plates such as Asari clams in sake broth and cheeses.

Opening next month is the cafe Crack & Press, serving bistro fare such as braised oxtail sandwiches, prawn tempura Po'boy baguette and Eggs Benedict with ingredients such as nori and shisho. The average bill will be about $15 a person.

Open: Crack & Press, 7.30am to 3pm on weekdays, closed on weekends; Copper on Stanley, 5pm to midnight, Monday to Saturday, closed on Sunday

What: Mix and match from about 50 items of yong tau fu, including more "creative" offerings such as Shanghainese pork dumplings and deep-fried seaweed. Everything is doused in braised brown mushroom sauce. Prices start from $5+ for six ingredients.

From 5pm, dig into about 30 Spanish tapas with Asian ingredients by chef Warren Poh, 30. Highlights include Iberico pork with cucumber salad and sesame ($23++) and grain-fed US beef ($25++), which is grilled in a charcoal oven.

Keeping to the shop's roots are yong tau fu-inspired tapas such as Hokkien rolls (five-spice meat rolls, $7) and Muah Otah ($8), which is made with charred mackerel and served with brioche.

Choose from more than 50 tipples including the Young Tau Foo cocktail, a concoction of pressed beancurd and vodka ($18++).

Open: 10am to 3pm, 5pm to midnight, Monday to Saturday, closed on Sunday

What: The 500-seat space is a foodcourt during lunchtime, serving hawker food such as chicken rice, herbal soup and economy rice. At 5pm, it becomes a full-service zichar restaurant, with an extensive menu boasting creative flavours.

Western and Japanese dishes are also served at night.

The bar opens for lunch and dinner, offering seven types of beer (from $5 for 330ml of Tiger Draft beer).

Open: 6am to 8pm, Monday to Saturday, closed on Sunday

This article was first published on November 8, 2015.
Get a copy of The Straits Times or go to straitstimes.com for more stories.