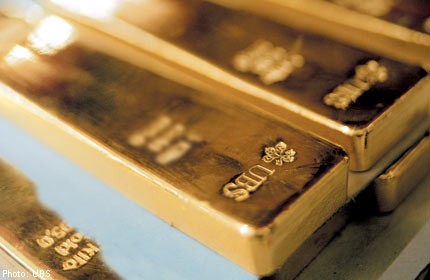 Swiss bank UBS has opened a gold vault to store physical gold in Singapore for its wealth-management clients, its first such storage facility outside of Switzerland. The bank says it is seeing more interest in the precious metal from investors in the region, despite a recent slump in gold prices.

"Notwithstanding the drop in gold prices, we are still receiving queries on the offering from clients who are keen to reap the benefits of asset and geographical diversification," said Mr Peter Kok, regional market manager for wealth management in Singapore and Malaysia.

"These clients tend to hold a long-term view on gold and enjoy the stability and security benefits which come with holding gold as an asset class."

"Singapore is the first location in Asia, and the only location outside of Switzerland, where we have a facility for the storage of physical gold," he said. The Republic was selected due to its "excellent infrastructure and sound legal framework".

Other banks that have bullion storage facilities in the Singapore FreePort include Deutsche Bank, which opened its largest vault outside of London there last month, and JP Morgan Chase, which launched its vault in 2010.

Singapore has been promoting itself as a hub for gold trade. Last year, it eliminated a 7 per cent sales tax for investment-grade precious metals.

Interest in gold among Asian investors persists despite bullion falling to a 34-month low on June 28, erasing US$66 billion (S$83.4 billion) from the value of investor holdings, according to Bloomberg.

Bloomberg also reported that Goldman Sachs and Credit Suisse are forecasting further declines on the possibility that the United States Federal Reserve may withdraw its stimulus measures.

But gold may have seen its trough as prices are near production costs, said Mr David Fergusson, chief investment officer of Singapore-based Woodside Holdings Investment Management.

"Physical demand can't be satisfied at the moment and at the current prices, mine production is not sustainable," Bloomberg quoted Mr Fergusson as saying. "That will be fairly supportive."