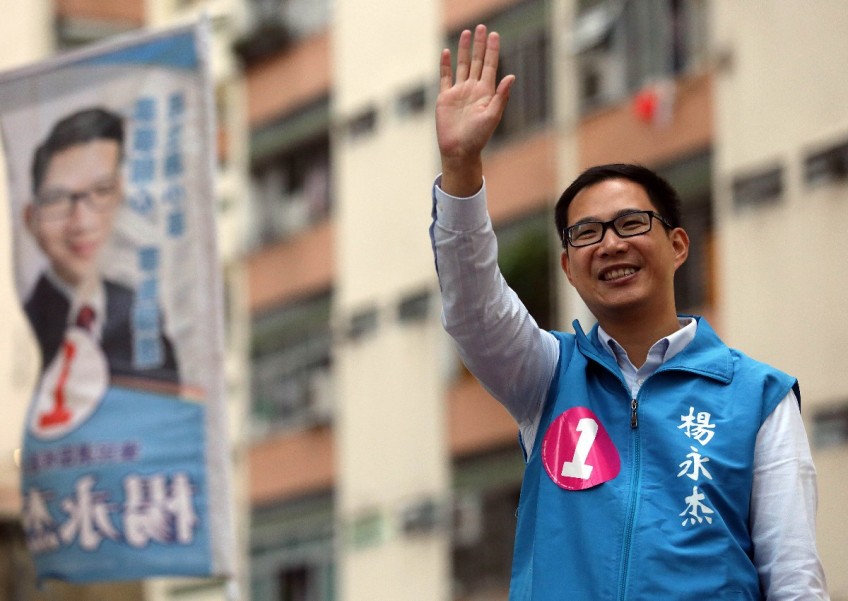 This picture taken November 15, 2015, shows Kitson Yang, an independent candidate, waving to members of the public in the To Kwa Wan district of Hong Kong in the lead up to local elections.
AFP

Some 50 activists had lined up as independent candidates to become district councillors - local representatives advising the government on neighbourhood policies - and seven managed to wrest seats from far more experienced rivals from established political parties.

These activists' success in Sunday's vote marks the formal coming-out party of a new political force in Hong Kong, according to political scientist James Sung of City University.

He describes them as "young, creative and energetic" and different from candidates of other parties.

"The 'paratroopers' were very successful... Before this, no one thought they would succeed."

An elated Clarisse Yeung, who had helped found a group to archive the evolution of Occupy (also known as the Umbrella movement) - and who on Sunday won against a candidate from the pro-Beijing New People's Party - told the local media: "It's a total surprise. I think the Umbrella movement roused many Hong Kongers, who in the past did not care about the district council elections and politics, to cast their first vote."

One of the issues the "umbrella soldiers" want to champion is the re-writing of Hong Kong's mini-Constitution - something put forward by Occupy student leader Joshua Wong.

Since civic nomination for the election of Hong Kong's chief executive is not explicitly provided for in the Basic Law, the constitutional document should be re-written, they argue.

Also on Sunday, former trading company businessman Chui Chi Kin dealt a blow to the city's biggest party, the pro-Beijing Democratic Alliance for the Betterment and Progress of Hong Kong, when he unseated veteran Christopher Chung, who has been a district councillor for 21 years.

A record 1.47 million voters cast their ballots on Sunday and, although that was only 47 per cent of the electorate, it was the highest turnout ever.

But there were some upsets in the pro-democracy camp: Mr Albert Ho, who was a chief executive candidate in 2012 and a former Democratic Party chairman, and his fellow heavyweight Fredrick Fung, of the Association for Democracy and People's Livelihood, failed to impress.

The latter lost to Ms Chan Wing Yan, a petite 25-year-old nicknamed "Flea Catcher" after she arranged for pest removal services for residents in public flats. She is backed by pro-Beijing parties.

The two issues that stand out in the mixed election results are that livelihoods matter more than ideology, and mainstream parties cannot take voters for granted.

Residents told The Straits Times that candidates with plans to improve living conditions at the district level, from bus services to lower rentals, won their vote.

"In Chai Wan (an island-side district), there is no so-called Umbrella movement effect; what residents want to know is what kind of services you are going to provide for them," said Mr Chui.

The polls also showed the continuation of a trend that started during the Legislative Council elections in 2012 - a rejection of mainstream political parties with insipid performances.

Then, voters gave their support to radical parties such as People's Power, known for its filibustering tactics, at the expense of moderates like the Democratic Party.

This time, even the radical parties were rejected, winning no seats.

This article was first published on Nov 24, 2015.
Get a copy of The Straits Times or go to straitstimes.com for more stories.