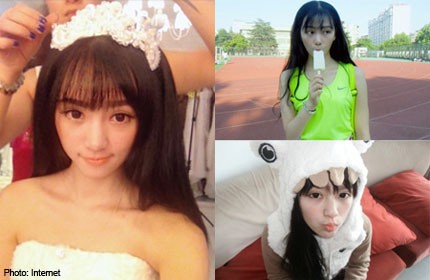 According to China Navis, her major is Art performance in Wuhan university. She has a fresh, sweet and cool temperament and she loves food, movie and sports. Her fresh and cool appearance makes an impression.

Huang Cancan is from Wuhan city, which is rich with beauty. This Wuhan girl personifies an "angelic appearance, a good shape, as well as a hot and outgoing personality". Thus she has been dubbed the "Wuhan University Goddess".

Huang Cancan became famous because she attended the goddess campaign and her photos went viral on the Internet. She said she was not able to adapt to life in the spotlight.

"I am just a girl who loves to be photographed," Huang Cancan said. "I hope to show my beauty to you all. At the same time, you can know more about Wuhan University and I can deliver the positive energy of my university."