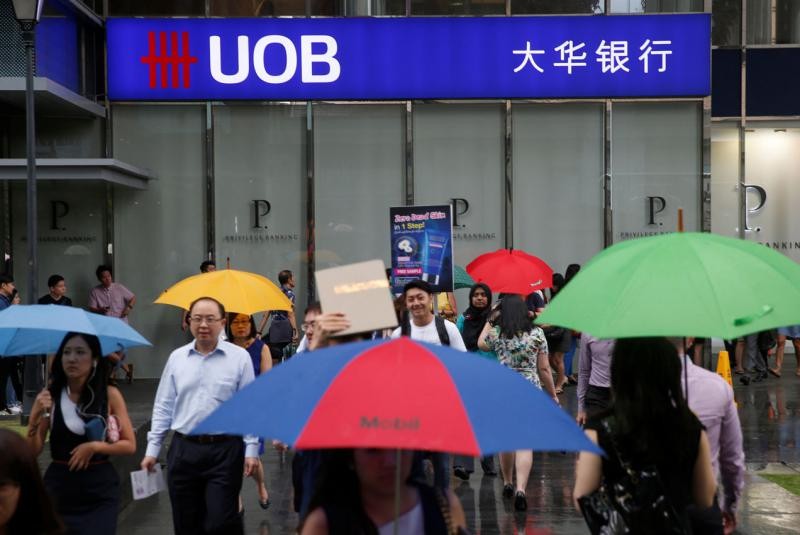 The improvement - it beat Bloomberg analyst estimates of S$769 million - was mainly led by growth in non-interest income which grew 13.9 per cent to S$813 million on the back of higher net trading income.

Net interest income was flat, coming in at 0.2 per cent lower from a year ago at S$1.21 billion as the effects of loan growth were offset by a nine basis point decrease in net interest margin to 1.68 per cent.

The bank's capital and funding positions stayed sound; as at June 30, gross customer loans were up 4.9 per cent at S$212 billion from a year ago while customer deposits were 2.8 per cent higher at S$248 billion. Loan-to-deposit ratio stood at 84 per cent.

At a results briefing on Thursday, UOB chief executive and deputy chairman Wee Ee Cheong said the loans growth target for the full year would remain in single digits.

For the first half period, net profit was S$1.6 billion, up merely 0.2 per cent from a year ago. Healthy loan growth led to a 3 per cent rise in net interest income for the half year to S$2.49 billion. Net interest margin fell 3 basis points to 1.73 per cent which Mr Wee attributed to lower short-term rates in Singapore as well as competitive loan pricing.

Non-performing loans for the quarter clicked higher to 1.4 per cent versus 1.2 per cent a year ago stemming from the continued downturn in the oil and gas sector. The bad loans rose 22 per cent to S$3.06 billion due to new NPLs in Singapore and Indonesia.

"While our performance reflects the effects of a cyclical slowdown, with softer revenue growth and rising NPLs, we kept our balance sheet strong," said Mr Wee, admitting that the slump in the oil and gas and support sectors was a key concern for the bank, possibly over the next one to two years.

Another weak spot was the high gearing levels among small and medium-sized enterprises which are hit by higher operating cost amid a tight labour situation here.

"We are in moderate growth environment and so we anticipate credit cost will rise although it will not spiral out of control. It's an ongoing concern and we are monitoring this," Mr Wee said, adding, however, that the bank's reserves were more than adequate to cushion any adverse impact.

Asked to comment on the Monetary Authority of Singapore's move to raise the ante on its supervision of private banks amid revelations of several banks' involvements in the 1Malaysia Development Berhad scandal, Mr Wee replied: "We have to do the right thing. If we select the right customers and have the right process, I'm not worried. Key is the (type of) customers that we are attract," he said.