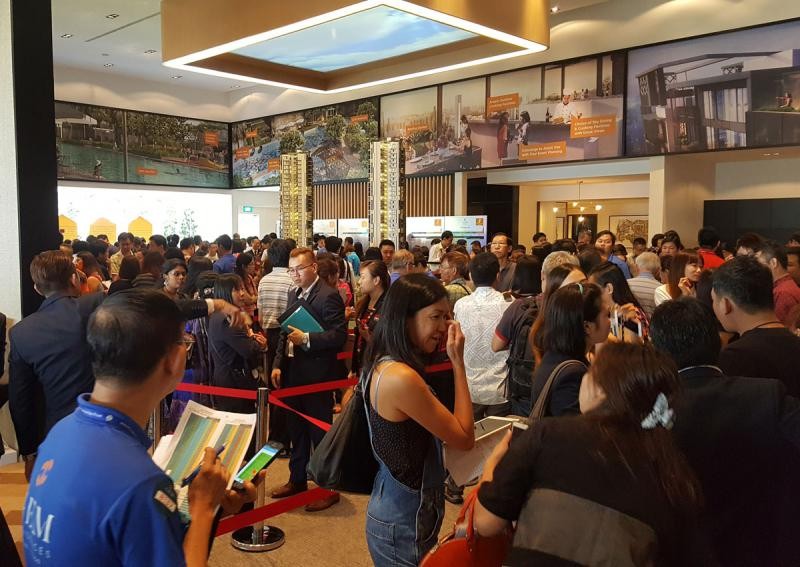 OF the many innovative features for GEM Residences that its developers came up with, one particular scheme has ruffled the feathers of the housing regulator.

BT understands that under a "specimen cheque scheme", the joint developers - Gamuda, Maxdin, and Evia Real Estate - issued cheques of S$7,500 or S$10,000 to prospective buyers who then submitted these for expressions of interest. The buyers could have used these cheques to offset their booking fee on balloting day.

But the plan was scuttled after the Controller of Housing directed these developers on Thursday night not to proceed with the use of such cheques, as this circumvents the requirement of a minimum 5 per cent booking fee for a residential purchase.

Despite the about-turn, the 99-year leasehold project in Toa Payoh still sold 51 per cent of all units in just one day - marking one of the highest launch take-up rates in recent years.

Buyers who turned up at the showflat on Friday morning were informed that those specimen cheques can no longer be used. But they were offered two alternatives - a direct discount of the same amount or to accept a cash rebate upon the signing of the sales and purchase agreement.

In response to BT queries, an Urban Redevelopment Authority (URA) spokesman said the offer of the "specimen cheque scheme" by the developers to offset part of the booking fee to be paid by the purchaser does not comply with the requirement under the Housing Developers Rules for a minimum booking fee of 5 per cent of the purchase price for an option to buy a unit in a licensed housing project.

"It is also a circumvention of the minimum 5 per cent cash downpayment requirement of the Monetary Authority of Singapore," the spokesman said.

With the downpayment requirement being "a financial prudence measure" to encourage prospective buyers to make careful considerations before taking up the option to purchase, "such schemes may entice purchasers into taking up the option hastily due to the lower upfront payment".

A S$7,500 or S$10,000 subsidy on downpayment via the specimen cheques also significantly reduces the cost of forfeiting the option to purchase or even allow some buyers of the smaller units to make a gain from the forfeiture; under current rules, 25 per cent of the booking fee is forfeited if the option is not exercised.

BT also understands that should options be entered into hastily and forfeited with little cost, it may compromise the developer sales data collected by the URA. Since the legislation for detailed sales data to be provided by developers on a weekly basis kicked in on May 25, 2015, a unit is considered sold once an option is issued, given the current low abort rate.

The specimen cheque scheme was initially kept under wraps until the authorities were notified a few days before balloting day. According to the URA, it only received information on the scheme from the developers on Wednesday.

But the abrupt cancellation of the scheme was met with little disappointment from some 360 prospective buyers who packed the showflat on Friday. To make up for the last-minute change, the developers also promised a few free additional kitchen appliances from Italian upmarket brand SMEG to each buyer.

Some 297 units in the 578-unit project were sold on Friday. Evia Real Estate managing director Vincent Ong attributed the strong sales to the prime location and its "club condo" concept. Prices for the remaining units are raised by 2 per cent this weekend, he said.

The "club condo" concept is another novelty in the project, apart from the move to release a full price list for all units one week before sales commenced.

Services such as car rental, laundry, food/grocery delivery, housekeeping services or even the hiring of a private chef will be paid on demand by residents. Other services - including free dance classes, weekly health checks, and concierge services - will be paid for by the developer in the first year and the condo management will have to decide whether to continue with these thereafter.

Mr Ong stressed however that the additional costs to be borne by the developers will not translate to higher monthly maintenance fees for residents.

Property consultants note that the affordable price quantums at GEM Residences worked to its favour. "The developers' price-to-sell strategy plus its timing - with prior release of its price list that shows more attractive pricing - clearly worked to draw higher interest from buyers," said Knight Frank head of consultancy and research Alice Tan.

Century 21 Singapore CEO Ku Swee Yong pointed out that GEM Residences likely benefited from a lack of new launches within the Toa Payoh area for the past seven years, and the strong upgraders' pool in Toa Payoh, Bishan and Braddell where HDB prices are above average in value. He added that "with recent good sales in Sturdee Residences, OUE Twin Peaks, Ardmore Three and Cairnhill Nine, it is hard to expect the minister to relax cooling measures any time soon".

This article was first published on May 30, 2016.
Get The Business Times for more stories.