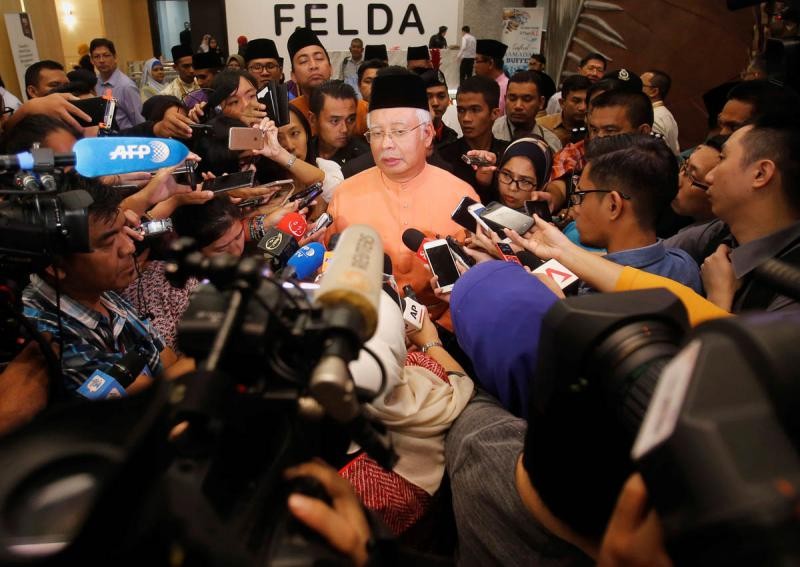 SINGAPORE - The tight circle of support around Malaysia's Prime Minister Najib Razak shows no signs of cracking and it may be business as usual in the scandal-rocked country, but the US government's move to seize assets allegedly stolen from 1MDB may place a "time limit" on the status quo.

Before the US appeared with its stinging rebuke - "we will not allow the United States to become a playground for the corrupt" - and named five of nine individuals allegedly tied to the 1MDB laundering conspiracy, it would seem like there was no "expiry date" on Malaysia's political snafu.

That may change with the exposes in the 136-page complaint filed by the US Justice Department which among other things, alleged that a total of US$731 million (S$992.7 million) of 1MDB's funds meant for investments in energy and real estate were circuitously routed to a private bank account in AmBank held by "Malaysian Official 1".

Henceforth, it's going to be hard to claim don't know (local lingo for "pretend that nothing is wrong"), said an observer.

Very few expect the US to stop at the civil action to seize US$1 billion of assets allegedly embezzled from 1MDB.

"There's lots more to come," says John Malott, a former US ambassador to Malaysia in the 1990s, referring to US follow-up action on the case which he says could result in indictments of several people close to Mr Najib, chiefly Malaysian tycoon Jho Low.

And with that, lots of explaining to do by the administration.

As recent as March this year, the narrative by Malaysian officials including Mr Najib was that Mr Low had never worked in 1MDB nor made any decisions or transactions involving the company.

The US filings allege the opposite.

Based on communication transcripts, Mr Low was referred to as "the 1MDB Operator or intermediary in Malaysia" by an unnamed Goldman Sachs managing director in an email in 2012, the year that the Terengganu Investment Authority (TIA) changed its name to 1MDB.

The filings also allege that Mr Low had diverted tens of millions of dollars from his Good Star account to fund "The Wolf of Wall Street", the five-Oscars nominated Hollywood movie produced by a firm co-owned by Riza Aziz, Mr Najib's stepson.

Some observers expect the ruling Umno, a popular party among Muslim-majority Malaysia, more specifically its Supreme Council, to come under pressure to act if the US action cranks up.

In Malaysia, this is the only and highest decision-making body that can decide Mr Najib's fate, and for now, the support is unwavering.

Mr Najib has tightened his grip over his party and reshuffled his cabinet thrice by moving up loyalists; he has sacked his critics including his former deputy and wields great influence on the country's top institutions.

He has denied any wrongdoing and the country's Attorney-General has cleared him of graft allegations.

Domestically, pressure on Mr Najib to resign, apart from within Umno, is not likely to succeed.

The opposition pact, which denied Barisan Nasional its two-third majority in the past two general elections, appears fractious and fragmented.

Malaysia's longest-serving former premier Mahathir Mohamad's campaign to topple the Malaysia leader has yet to rattle the seemingly unflappable incumbent.

The Coalition for Clean and Fair Elections or Bersih is considering yet another anti-Najib rally but the tried and tested "yellow rally" is also unlikely to make him budge.

Instead, there are fears that crackdowns against activists and dissidents could escalate if more pressure piles on his leadership.

While the US' proceedings, deemed the largest single action ever brought under the Kleptocracy Asset Recovery Initiative, do not amount to criminal charges, it's more damning and far reaching than the probes in Singapore and Switzerland that appear centred around their financial institutions and their intermediaries.

The US has methodically laid bare how 1MDB's monies of some US$3.5 billion were raised for strategic purposes but were instead allegedly routed into the accounts of key players or "co-conspirators" accompanied by riveting insights into laundering techniques such as frequent use of currency exchange brokers and entities that mimic names of well-established enterprises.

With the latest developments, Malaysians angered by the 1MDB fiasco may finally be able to keep their faith for justice to run its course - never mind that the trigger had to originate from thousands of miles away from home.