US horse association will be ordered to allow clones on registry 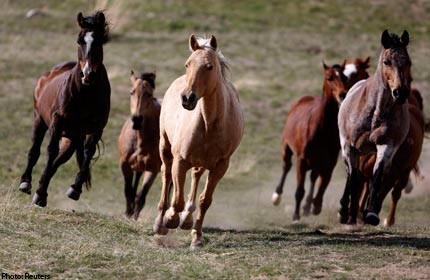 UNITED STATES - A US horse association soon will be required to add cloned horses and their offspring to its prestigious registry, a federal judge in Texas ruled on Monday.

The decision could encourage cloning and open the way for the animals to participate in lucrative horse races.

US District Court Judge Mary Lou Robinson said she will sign an order requiring the American Quarter Horse Association to begin allowing cloned animals to be placed on its registry, according to the organisation.

The judge did not rule on the plaintiffs' request for an award of nearly $900,000 in attorney fees, according to the horse association.

Some quarter horse owners and breeders have complained that cloned animals have an unfair advantage because they are selected according to superior genetic characteristics.

The quarter horse association issues and maintains a pedigree registry of American quarter horses, a popular breed associated with cowboys riding on the range in the 19th and early 20th centuries.

Quarter horses are known for their strength and speed over short distances, and the name is derived from quarter mile races. They are also popular in rodeos.

The association said in court that it approves thousands of quarter horse races annually with total prize money of about $131.5 million in 2012.

The quarter horse association, which has a registry of 751,747 animals, stated in court that it is a private organisation and has the right to decide its membership rules.

It had previously allowed horses born using reproductive techniques such as artificial insemination to register.

Cloning is the creation of an animal that is an exact genetic copy of another, with the same DNA. A cloned sheep named Dolly produced in Scotland drew international attention when she was shown to the public in 1997.

Since then, cloning of agricultural livestock such as cattle and pigs as well as horses and sheep has become more common although it is still a small portion of total livestock production.