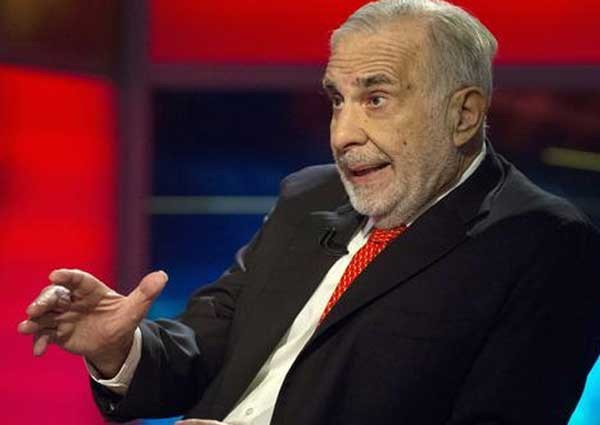 New York - US stocks finished a volatile session sharply lower Thursday after investor Carl Icahn said he had sold his remaining investment in Apple, sending the tech giant's shares down 3.1 per cent.

Icahn told CNBC he liquidated his remaining shares due to worries the Chinese government would thwart Apple's efforts to sell more iPhones and other gadgets in the world's second-biggest economy.

Icahn also said he was "extremely cautious" about US equities given the embrace by the US Federal Reserve and other central banks of low and negative interest rates.

US markets had opened lower following government data showing weak US economic growth in the first quarter and a decision by the Bank of Japan against enacting more monetary stimulus.

Those moves were countered by the lift from merger announcements involving the medical devices company Abbott Laboratories and cable and media giant Comcast. The Nasdaq was positive and the S&P 500 near flat before Icahn's remarks.

Medical device maker St. Jude Medical soared 25.6 per cent on news it reached a deal to be acquired by Abbott for US$25 billion (S$33.56 billion) in cash and shares. Abbott fell 7.8 per cent.

DreamWorks Animation, the studio known for its "Shrek" and "Madagascar" films, surged 24.1 per cent as it agreed to be acquired by Comcast for US$3.8 billion. Comcast fell 0.2 per cent.

Pharmaceutical company Medivation climbed 7.9 per cent after French drug giant Sanofi made an unsolicited all-cash US$9.3 billion takeover offer for the company. Medivation, known for the lucrative prostate cancer drug Xtandi, said it would evaluate the offer. US shares of Sanofi fell 1.8 per cent.

Facebook powered 7.2 per cent higher after announcing that first-quarter profits tripled from the year-ago period to US$1.5 billion. Facebook's strong results contrasted with disappointing earnings over the last week from Apple, Microsoft and other large technology companies.