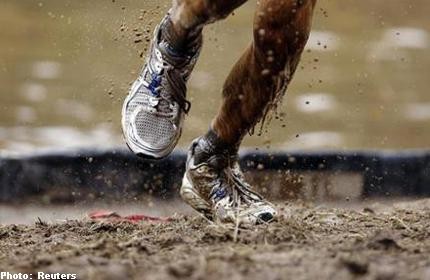 SINGAPORE - In William Goldman's 1964 novel Marathon Man, his hero Thomas Levy - played by Dustin Hoffman in the film - is like some of us. A runner and a romantic.

For him nothing is impossible, not even chasing down one of history's finest runners: "It could not be happening but there it was - Levy was gaining on Nurmi!"

Of course, Levy was only day-dreaming. Because almost no one caught up with Paavo Nurmi, not even in novels.

For this was a runner so fine he had two nicknames - Flying Finn and Phantom Finn - and had his nation's first DC-8 named after him. Being a distance runner, the first flight was fittingly to New York.

Nurmi, who ran with a stopwatch in hand, won seven races in six days at the 1924 Olympics en route to five golds.

He won four other golds, and three silvers, in three Games. When people say Usain Bolt, greatest runner ever, my mind travels to Finland.

Nurmi was a quiet man of cold calculation; Bolt is a fellow of casual cool with a wide grin, lots of cheek and a bragging mouth.

He is a psychologist's ideal interview - does he not feel tension? - and is sports' calmest champion since golfer Walter Hagen - according to Sports Illustrated - once kept shaving as the US president waited for him at the first tee.

So fast that he generates counter-intuitive headlines like "Is Usain Bolt too quick for his own good?"

So fast that even men caught for doping have previously been unable to beat him. He is evidently drug free and also druggie resistant.

Only a head start for them or a false start by him can fell him.

Bolt is now, at least, the greatest sprinter ever. Better than Jesse Owens, who once broke four world records - 100 yards, long jump, 220 yards and 220-yard hurdles - in 45 minutes but won medals in only one Games. Better than Carl Lewis, who ran like a stone skipping over water but had an ego longer than he jumped.

Lewis had five Olympic golds in sprinting and one silver; Bolt has six sprinting golds. Lewis had six world championship golds, one bronze in the sprints; Bolt has eight golds, two silvers.

But the greatest runner ever cannot only be simple mathematics - as it is in golf and Majors - for then Nurmi, nine Olympic golds, three silvers, wins.

It is measured in the records made by you, the legends that follow you and the statues built for you. It is indefinable and incalculable which is why we never can be sure.

Nurmi ran before my father was born, in the 1920, '24, '28 Olympics, yet yesterday someone tweeted one of his quotes: "Mind is everything; muscle, mere pieces of rubber. All that I am, I am because of my mind."

He was a running zealot with 22 world records who had so many elements of the greatest.

He would win, gather his clothes and disappear without autograph, photograph or smile.

In the Complete Book Of The Olympics it is written that on an army march - with rifle, cartridge belt and 5kg sack of sand - he decided to run not walk and finished so quickly it was suspected he had taken a short cut.

On the Sports Museum of Finland website, the great Australian runner Ron Clarke is quoted, paying homage through a question: "How was it that Paavo Nurmi stood apart, stern and silent, with uncompromising self-discipline, with white-hot ambition, bearing the closest resemblance, in athletics, to Napoleon Bonaparte?"

Still, for all his athletic virtues, Nurmi remains a distant figure. Perhaps modern generations are too taken with the now and the new.

Perhaps when choosing the greatest we're biased towards current athletes because we like to boast we lived in the same generation as the best.

Arguing the greatest ever is fun but humbling. It makes us appreciate that no runner exists in isolation but as a strand in an ancient athletic fabric. It makes us consider who came before us and wonder about what we do not know.

Bolt is the greatest runner, sprinter or distance runner, I have ever seen. But Nurmi is always my reminder that there is too much I have not seen.