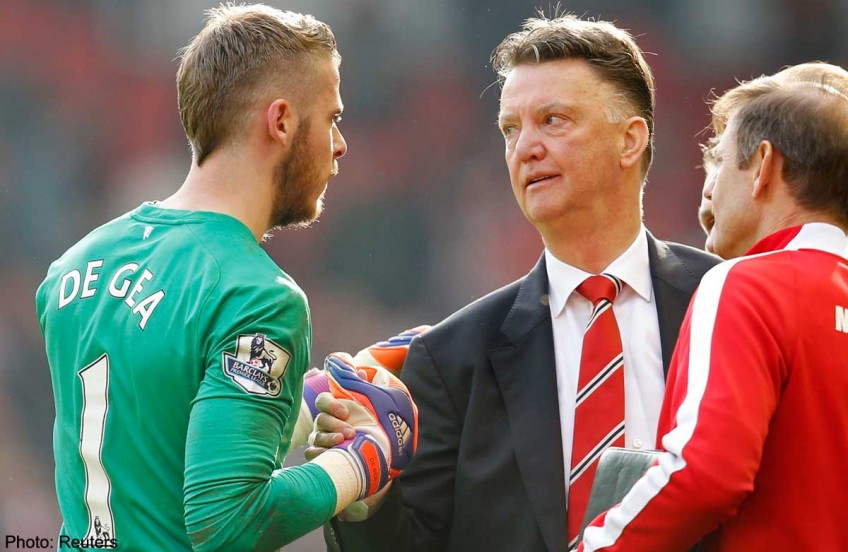 LIVERPOOL - Manchester United manager Louis van Gaal heralded his team's 2-1 victory over Champions League qualification rivals Liverpool at Anfield as "one of the most important in my career".

Juan Mata scored twice in Sunday's Premier League game, either side of a red card for home captain Steven Gerrard, and despite Daniel Sturridge hitting back, Liverpool fell to their first loss in 14 league matches.

Victory strengthened United's grip on the fourth and final Champions League qualifying berth, with Liverpool now five points behind, and Southampton and Tottenham Hotspur a point further back, leaving van Gaal to reflect on a potentially decisive afternoon.

"It is the moment we are coming back and we beat Liverpool again," said the Dutchman, whose side had condemned Liverpool to their last defeat with a 3-0 win at Old Trafford in mid-December.

"We beat them again with their own weapons and the pressure on the ball.

"Now, the gap is five points ahead of Liverpool and six ahead of Tottenham and Southampton, so the moment to win is one of the most important in my career."

Gerrard apologised in a television interview for his dismissal, which came just 43 seconds after he had replaced Adam Lallana at half-time.

Liverpool manager Brendan Rodgers admitted that Gerrard had been "probably a little frustrated" about having to watch the first half from the bench, but he refused to condemn his California-bound captain, who will join the Los Angeles Galaxy at season's end.

"I won't criticise him because he's been brilliant in my time here," Rodgers said. "Sometimes, these things happen. We'll move on."

Rodgers also played down an incident at the death - moments after Simon Mignolet had saved a Wayne Rooney penalty - that saw centre-back Martin Skrtel tread on United goalkeeper David de Gea after chasing a through ball in vain, saying that it "looked worse in slow motion".

Liverpool's defeat at Old Trafford proved the spur for a 13-game unbeaten run that revitalised their season, and Rodgers urged his players to channel the frustration from their latest setback in the same fashion.

Asked about his side's chances of a top-four finish, he replied: "It's a big challenge. But when I looked at the 10 games that were remaining, it was always going to be difficult to win all 10 of them.

"So we'd (factored) in a loss and maybe some draws in that. We hoped it wouldn't be in this game against a rival, but it's still very much possible.

"There are five points between us and them. We've now got to recover and use this as the same springboard we did in the last game.

"We'll go away now and recover and look to get a victory in our next game (away to Arsenal), which we've shown we're more than capable of."