What would happen if Taiwan lost all of its diplomatic allies? 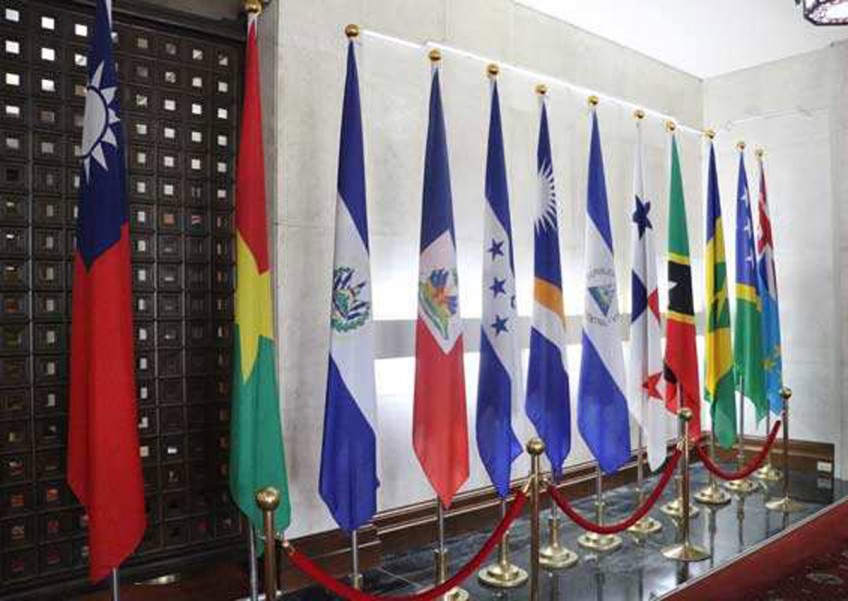 A view of the national flags of Taiwan's diplomatic allies is seen at the front entrance of the Ministry of Foreign Affairs (MOFA) headquarters in Taipei in this undated file photograph.
The China Post/Asia News Network

TAIPEI, Taiwan - For a country that has constantly faced pressure from China in the international arena, Taiwan only has a handful of diplomatic allies who support the island nation's limited international space.

However, some academics and even senior Democratic Progressive Party (DPP) members have been arguing that "diplomatic allies are useless" to Taiwan.

Instead of spending millions of diplomatic funds in retaining official recognition from these countries, most of them underdeveloped, they argued that losing diplomatic allies would be within a tolerable limit.

Some even argued that it would not be the end of the world for Taiwan if its diplomatic allies dropped to zero, as long as it had the support of world powers such as the US and Japan.

Such rhetoric has apparently resurfaced recently after the country lost one of its remaining 20-plus allies last December when Sao Tome and Principe announced that they would sever ties with Taipei before switching recognition to Beijing a week later.

Almost no one, however, felt regret for the loss of the 20-year-old ally.

Netizens applauded for the decision of the African country, saying that it meant that Taiwan no longer needed to spend money to maintain such a fake friendship.

Even DPP heavyweights, including Hsu Hsin-liang (許信良), head of Foundation on Asia-Pacific Peace Studies, a private think tank that have served as an indirect channel of communication with China, the US and Japan, echoed the view.

Hsu said that having small nations as diplomatic allies like Sao Tome was "not a good thing," as they imposed too much of a burden, adding that losing them "is not really important."

Former premier Yu Shyi-kun (游錫) - who recently led a Taiwanese delegation to the inauguration of US President Donald Trump, also noted that the more allies break diplomatic relations with the "R.O.C.," the more the nation's budget is saved for "Taiwan."

But is it true that R.O.C. Taiwan's status as a sovereign state would not be jeopardized at all once we lost all of our diplomatic allies?

Would Taiwan gain more than lose if they really happened?

According to international law, the essential elements of statehood are: population, definite territory, a duly-established government and sovereignty.

Taiwan fits all these requirements even if it ultimately loses all of its remaining allies.

However, there are also two most common schools of thought for the creation of statehood in international law: the constitutive and declaratory theories of state creation.

In the declaratory theory of statehood, an entity becomes a state as soon as it meets the minimal criteria for statehood.

Therefore, recognition by other states is purely "declaratory."

In the constitutive theory, on the other hand, a state exists "exclusively" via recognition by other states.

The theory splits on whether this recognition requires "diplomatic recognition" or merely "recognition of existence."

In the end, it all depends on what theory you look at it.

Of course Taiwan will still function as a sovereign state even if we no longer have any allies that recognise us as a country.

But in practice, is it really okay for Taiwan for not have any diplomatic allies?

Some have argued the opposite as Taiwan needs as much international support as possible, especially formal diplomatic relations with other countries around the globe.

During a previous interview with local media, Chen I-hsin (陳一新), a professor of Tamkang University's Graduate Institute of American Studies, said Taiwan is unable to participate in major international organisations due to most countries' One-China Policy that recognises Beijing instead of Taipei.

It is therefore in desperate need of its allies to voice support during United Nations General Assembly and other similar organisations so that the world would be reminded of the existence and the importance of the R.O.C.

Li Da-jung (李大中), another Tamkang professor Graduate Institute of International Affairs and Strategic Studies, noted in the same interview that no matter how small a diplomatic ally is, it still has a vote in the UN and WHO, where Taiwan is in need of help and support.

A diplomatic source told The China Post that it was understandable that so many nationals, politicians and even scholars would think that these allies were of little use to Taiwan.

Many of these allies need Taiwan's financial assistance and aid instead of the other way around.

The source said most people may think that instead of spending they budget to develop a remote country, the money should be spent on Taiwanese people in need.

But the source stressed that as a developed country, Taiwan had the responsibility to help those in need, especially as it used to be a foreign aid recipient decades ago.

Taiwan still has much room for improvement in its foreign aid allocation, especially compared to the development aid standard set by the UN as 0.7 per cent of a country's gross national income, the source added.

According to Foreign Ministry, Taiwan has earmarked NT$8.5 billion (S$390 million) in official development assistance in 2014, accounting for less than 0.05 per cent of the country's gross national income.

Another diplomatic source warned The China Post that Taiwan could face serious consequences if it were to lose all of its allies.

As a country largely depends of foreign trade, Taiwan's capability to interact with countries around the world is of primary importance to its survival.

"Once that happened, it would mean that no countries around the world would officially recognise the existence of the R.O.C. in international stage."

By then it would make it even easier for China to pressure other countries into recognising its claim that Taiwan was part of its territory.

"R.O.C. Taiwan may officially vanish from the world and become part of People's Republic of China no matter how we argue by then," the source added.

On a more practical front, for instance, the source said that R.O.C. passport holders now enjoy visa privileges at 165 countries and territories worldwide.

The R.O.C. passport could cease to be recognised by the world once it was not being recognised diplomatically amid pressure from Beijing, it added.

In the end, would leaving Taiwan without a single ally will make the country better off, or more diplomatically isolated?

That is the question the DPP government and Taiwanese people have to consider carefully.