When the haze doesn't go away 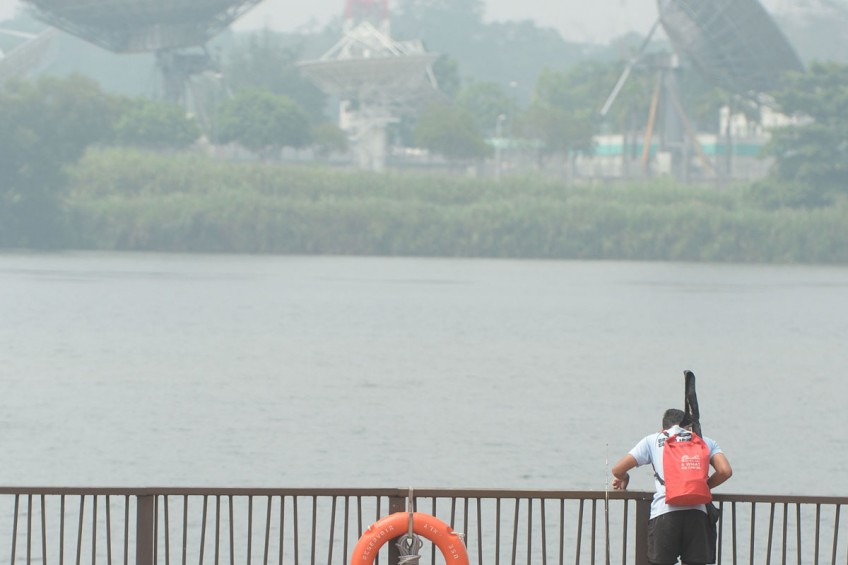 A hazy day at Lower Seletar Reservoir around 11.15am on 19 September 2015.
The Straits Times

Singapore has been shrouded in haze from the Indonesian forest fires in recent weeks. This transboundary pollution problem remains intractable despite seemingly increased efforts in recent years to mitigate it.

The region should not expect this problem - which has lasted for at least two decades - to be resolved any time soon.

The recent policy enacted by Singapore - to impose harsh fines on errant companies whose activities contribute to the transboundary haze - is likely to be futile. The reason is simple: The problem lies outside Singapore's jurisdiction and cannot be solved by us alone.

The Transboundary Haze Pollution Act, passed in Singapore's Parliament last year, will not have any impact on the transboundary haze if Singapore companies are the only ones hauled up to face the law, whereas non-Singapore firms contributing to the haze problem go scot-free.

Many also optimistically expect that Indonesia will take action against those responsible for illegal forest fires, but that is not going to happen fast enough for the haze to clear up soon.

In the meantime, what could be done? While international pressure on the culprits should continue, it is extremely important to work with stakeholders, which include not only the victim countries but also farmers and plantation owners in haze-originating countries, regional organisations (for example, ASEAN, Apec), global agencies (for example, the World Bank, the International Monetary Fund) and other non-governmental organisations.

For Singapore, it is crucial that we accept that the haze will be with us for years to come, and learn to live with it while mitigation efforts are ongoing.

At the root of the problem is the cross-boundary nature of the haze pollution. It is difficult for any country to assert extra-territorial jurisdiction without infringing on the sovereignty of other nations.

For Indonesia, enacting land-use statutes or changing institutions to regulate forest burning can be tedious.

Nevertheless, the greater challenge lies in the enforcement of these laws.

As highlighted in an earlier Straits Times article ("Tough to pinpoint haze culprits"; Sept 15), the identification of errant culprits is no easy feat and the prosecution of perpetrators is also a long-drawn-out process.

Besides, Indonesia, as a developing country, has to carefully allocate its resources across other critical needs such as infrastructure development, education and subsidies to the poor.

The onsets of the forest fires are exacerbated by natural factors like the cyclical El Nino which prolongs the drought and intensifies the fires.

In fact, meteorologists predict that this year's El Nino will have one of the strongest effects since 1950. With Indonesia being home to the world's largest area of tropical peatland, dousing its forest fires is evidently a much harder task than it appears.

The peat can continue to burn for months even after surface fires have been put out.

The haze imposes significant costs on the region. Haze particles can cause eye and throat irritation and respiratory illnesses, that will entail more medical expenses and cause a loss in productivity.

Other sectors of the economy, such as tourism, retail and conferencing, will also be affected when tourists decide to skip the haze-affected countries. Indirect costs in the form of reduced visibility and cancellation of recreational activities are also significant.

Recent school closures in several states of Malaysia and Singapore's offer of fire-fighting assistance to Indonesia are other examples of consequential costs.

During the 1997 haze, an episode that lasted three months, a conservative estimate of the economic costs of the haze in Singapore (by Professor Euston Quah, one of the two authors of this piece) was US$163 million.

In 2013, the one-week haze period which saw the Pollutant Standards Index (PSI) reaching a record high of 401 led to estimated economic losses of US$50 million, a figure extrapolated from previous findings. In the future, the economic costs are likely to increase.

BOYCOTTS AND OTHER PROTEST EFFORTS

Commentators often suggest that consumers should boycott products made by plantations that use the slash-and-burn method to clear land.

This approach is hardly feasible, given that identifying plantations complicit in causing fires is difficult. A boycott will likely penalise many of the poor who are hired by the plantation owners.

Furthermore, palm oil products produced by these errant plantation owners may be used as intermediate goods to produce final foods. Final producers might be unfairly penalised in a product boycott.

It is also crucial to keep up the pressure on Indonesia to alleviate the haze problem, by mustering the collective influence of international and regional agencies.

There should be continual and systematic research in this part of the world on the damage caused by haze at the sectoral level.

Calculating these costs could help Singapore better negotiate with haze-originating countries and estimate the costs of aid to be given to Indonesia. It can also help the governments in Singapore and Indonesia to offer targeted assistance to the affected sectors.

Currently, the clear response of Singapore, which includes timely dissemination of information to the public, the Haze Subsidy Scheme, and the WeCare packs, is highly applaudable.

The Singapore Government can take an even more active role in advising people against outdoor activities.

It can consider imposing a mandatory shutdown of outdoor sports facilities when PSI levels reach the very unhealthy or hazardous levels. This could be accompanied by a compensation scheme for affected businesses.

While protest efforts continue, it is important for now to give more thought to what Singapore could effectively do to mitigate the ill effects of the transboundary haze on the economy, our health and our everyday life.

Can the annual haze episode go away? With the adoption of the right strategies and measures, it might no longer be a regular occurrence in the long run.

For now, accept that the haze is here to stay, and come up with adaptation strategies to live with it.

This article was first published on September 22, 2015.
Get a copy of The Straits Times or go to straitstimes.com for more stories.