Where 4 famous chefs in Singapore eat 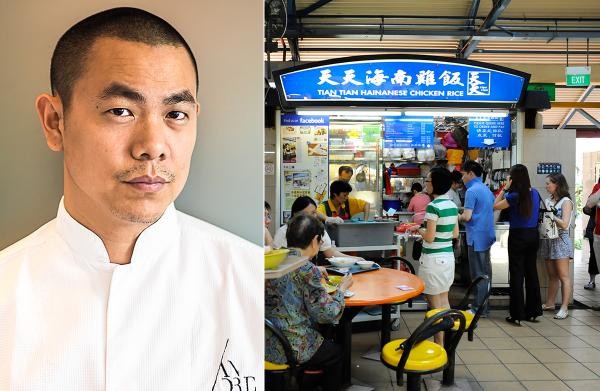 If anyone knows just how diverse and distinct eating in Singapore can be, it's the chefs who make it one of the world's top epicurean cities. Four kitchen maestros - Jason Tan, Andre Chiang, Julien Royer and Hatch Hashida - tell Desire Koh where they fuel up in their downtime.

The classically French-trained chef plays in the contemporary realm of Gastro-Botanica, where imaginatively-treated fresh fruit, vegetables and herbs stand out in settings of succulent seafood and meats. The plates draw their spirit from the restaurant's historic bungalow location in the Botanic Gardens and global cuisines.

"I go to JB Ah Meng (2 Lor 23 Geylang, Tel: 65 6741 2418, above) about four times a month after work with my team or chef friends. It's like a nightspot because it operates till 3am. The menu doesn't change much and the food is very comforting. I always get the white pepper crab, san lau hor fun (rice noodles with fish and bean sprouts) and di san xian (stirfried eggplant, green pepper and potato).

"I'm Singaporean, so a hawker in an alley is nothing special to me but it's fun to bring friends from overseas and see them shocked by the surroundings. I took Niklas Ekstedt (of Sweden's Ekstedt) and he loved it - he adapts very well to Asian flavours and he ate a lot."

Under his watch, Jaan entered the World's Best Restaurants list for the first time at number 100 in 2014 and leapt to 74th place this year. Royer left Jann in June, but in November, this scion of four generations of farmers will present his seasonal produce-driven flair at his new yet-to-be-named fine dining restaurant.

"Where to start? I like Luke's for really, really good oysters and seafood from the Boston bay area. I also like Brasserie Gavroche (above) for heart-warming bistro dishes; you almost feel like you're in Paris there. I like Bar-roque Grill for celebrations and special occasions because chef Stephane Istel is an entertaining character and is very good at doing whole pieces of meat and fish or a big couscous and bouillabaisse.

"I took Xavier Beaudiment (of Restaurant Le Pre in France) for chilli crab at Jumbo Seafood in East Coast and he had never tried anything as spicy before. He was very surprised to discover new flavours. I also took him for xiao long bao (steamed dumpling) at Din Tai Fung, which is where I always take chef friends from overseas."

"I like Jade Palace Seafood Restaurant, where I order the mixed meat and Hong Kong lap cheong (Chinese sausage) claypot rice and ask them to make it extra spicy. Sometimes people are surprised to see me eating there but I'm always looking for that contrast. I like to try something totally opposite to what I do as it de-stresses me.

The son of masterchef Tokio Hashida showcases his family's remarkable talents in multi-course Japanese omakase and sushi at their Singapore location, where natural ingredients reflecting the seasons are crafted into celebrations of compositions, flavours, colours and aromas.

"At the top of my list are Restaurant Andre (dishes shown above) and Jaan. I've known chef Andre for some time now and I've come to admire his creativity and inventiveness. There's an element of surprise and drama in the plating and combination of flavours to chef Royer's dishes (Julien Royer has since left Jaan). I appreciate and share their philosophy and approach to their cuisine.

"There's a lot of good food in Chinatown; I especially like Xiu Ji Ikan Bilis Yong Tau Fu (#02-88, Chinatown Complex Market & Food Centre, 335 Smith Street). And when friends from Japan come to visit, I like to take them for steamboat, and the one I most often go to is Imperial Treasure."