Who's been naughty or nice? 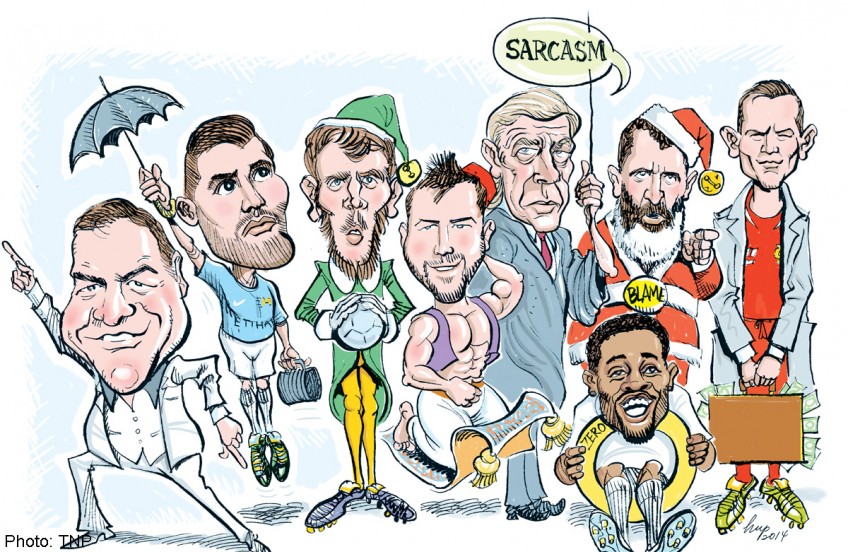 Last season, the West Ham manager was oh-so naughty, skulking along the touchline and pouting like a precocious schoolboy.

He had no friends and didn't particularly want any. It was his way or the highway. For him, the football was a Boeing 747. It belonged in the clouds.

And then, the hapless Hammer had an epiphany. He discovered that the way to a football fan's heart was to actually play some football. Suddenly, West Ham turned into John Travolta in Saturday Night Fever, strutting their stuff on the floor.

Allardyce signed strikers who used their feet for more than just standing on and, miraculously, the West Ham manager was a born-again good boy.

Even Allardyce was scoring. He got a kiss from Russell Brand on live TV.

The thing about the Manchester City striker is he's so unfailingly nice.

He's the cliched hitman with a heart, ruthless in front of goal and impossible to dislike in person. The anti-thesis of his predecessor Mario Balotelli, Aguero runs around like a dog chasing a bone, simply delighted to be playing with anyone.

His exuberance has been infectious. He already had 19 goals in 21 games this season before he left the field in tears after damaging knee ligaments against Everton, tugging at the heartstrings of housewives everywhere.

Fans adore him. Rivals begrudgingly admire him. Even Manchester United devotees struggle to boo him. He's practically perfect in every way, the Mary Poppins of modern assassins.

The whiskers on his chin hardly help, giving him the air of a puberty-stricken teenager trying hard to fit in with his big brother's friends.

But stick a pair of goalkeeping gloves on the Spaniard and he turns into a boy wizard. His jaw-dropping save to deny Balotelli against Liverpool was only the latest to suggest his boots are fitted with contraband springs.

He's the finest in the Premier League, fast becoming the world's best and still needs to show his IC to get into nightclubs. If he visited Santa, he could be confused for an elf.

The Queens Park Rangers striker is Annie in the orphanage or Aladdin among his roguish mates, the single diamond in the rough.

Or, to be more succinct, he's the best player in a team so blindingly wretched, they've convinced Rio Ferdinand's body to retire before he's actually decided to retire.

Austin's recent hat-trick against West Brom offered further proof that he's Oliver Twist in the Loftus Road workhouse. He'll soon be asking for more before escaping to a better place.

Any teacher will tell you that there are two types of naughty kids. There's one who sits in the corner and eats chalk because he's about as bright as an eclipse. He would be Balotelli.

He's not always intentionally naughty, he's just too busy to stop and think because he's setting off fireworks in his bathroom or tweeting racist jokes on Twitter.

And then there's the clever naughty kid. He's actually worse because he knowingly misbehaves with intelligent sarcasm. That would be Arsene Wenger.

Rather than own up when he's been caught out, he favours a sarcastic retort. Or he'll blame others. Or he'll even accuse his accuser of not "getting" him.

But it's rarely his fault. Even Balotelli acknowledges his own failings. But Wenger has defended his actions when there has clearly been no defence for his defence.

In recent months, the coach released a second autobiography in which he blamed his failure at Ipswich Town on not liking blue.

He attacked just about every Man United teammate and manager during his time at the club, got into a row with a fan at a Republic of Ireland camp, quit his job at Aston Villa to focus on his national duty (even though Ireland's next game is four months away) and allegedly turned up on Tom Cleverley's doorstep to start an argument.

And Keane believes he has mellowed. Should Santa ever have the misfortune to meet the recalcitrant Irishman, Keane is likely to say he is full of nonsense, hasn't won any trophies and isn't even the real ******* Santa Claus.

One of the most unforgivable crimes is deceit. Santa's "good" list has no room for liars.

The Liverpool centre back spent all of last season pretending to be a defender. Or he is pretending not to be one this season. Either way, he's pulling off the biggest con job since Ocean's Eleven robbed Andy Garcia's casinos.

In Croatia, it may not be a crime to impersonate someone else in the workplace. But it is at Anfield. His only hope of redemption is to slip Santa's "naughty" list to teammate Simon Mignolet.

The Tottenham striker is once again at the "stopping-scoring" stage. But he's now 30 years old and no one else can afford his wages which leaves him stuck at a club he seldom scores for - or seldom plays for after criticising the supporters last month.

The infuriating forward suggested Spurs preferred the atmosphere away from home. Most Spurs supporters would prefer Adebayor to simply go away.

WHO DID NEIL HUMPHREYS MISS? WHO SHOULD BE ON THE SANTA'S EPL NAUGHTY AND NICE LISTS? EMAIL YOUR VIEWS TO NPSPORTS@SPH.COM.SG

This article was first published on Dec 26, 2014.
Get The New Paper for more stories.