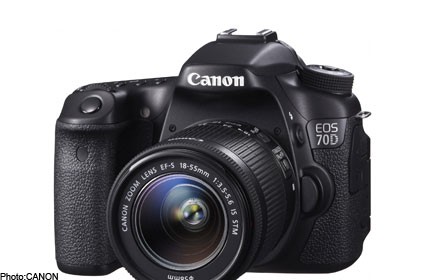 A Wi-Fi-enabled DSLR is not common as such cameras are used largely by professionals. However, an increasing number of consumers have taken to DSLRs, which probably explains why Canon has incorporated this popular feature in its latest EOS 70D.

A 20.2MP sensor with a DIGIC 5+ processor (the most current), the EOS 70D has dual-pixel CMOS technology which replicates how the human eye works. AF sensors are placed on the whole surface of the CMOS sensor, which makes for smooth focusing.

The 3-inch vari-angle LCD also enables AF points to be changed at the touch of a finger.

Slightly smaller than the 60D, the 70D is compatible with all Canon EF and EF-S lenses. Shooting speed is a fast seven frames per second.

The Wi-Fi function enables direct upload of photos and videos to YouTube, Facebook and Twitter, and sharing of files. Remote shooting via Wi-Fi is possible with the free EOS Remote app for iOS and Android devices.

How much: Price to be announced. Available at the end of next month