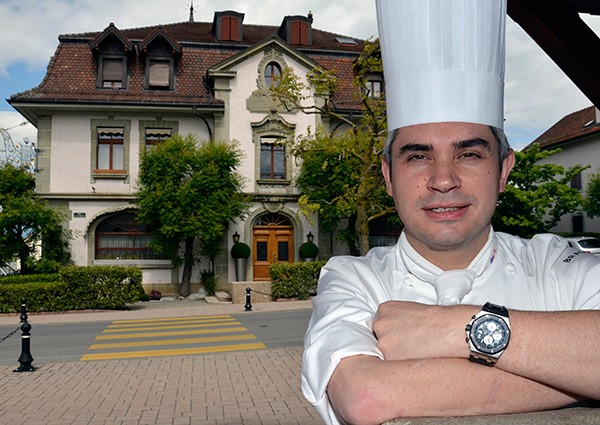 Brigitte Violier, who ran the restaurant with her 44-year-old husband, reportedly gathered the staff Monday and decided the show had to go on.

"I reserved a table quite a while ago for Tuesday lunchtime," a diner at the Restaurant de l'Hotel de Ville at Crissier - hailed as the best in the world only two months ago - told Swiss newspaper 24 Hours.

"They called me and explained that Madame Violier wanted the restaurant to keep going and asked me if I would be there to support them.

"I found that very courageous," he added.

Violier was found dead with his hunting rifle by his side at his home near Lausanne in Switzerland on Sunday. The couple have a 12-year-old son.

In the less than four years he and his wife ran the restaurant, they earned the maximum three Michelin stars and it was also named the "best restaurant in the world" by the French-based La Liste in December.

In 2013, Violier had been crowned chef of the year by the prestigious Gault & Millau guide.

In his last interview - given only four days before he died - Violier appeared in good spirits, although he did express worry that his success would not last.

He told the French daily Liberation that stars in guides did not matter to him. "It's all about clients coming back," he said in the interview published Tuesday.

"I hope that it lasts. With 54 employees you have only three months' grace," he said, referring to the waiting list for a table. "You have always to remain concentrated.

Amid rumours that Violier's deputy Franck Giovannini would now lead the kitchen, Swiss industrialist Andre Kudelski told 24 Hours that the baton must be passed to those that the great chef trusted.

"That which was built by Benoit Violier was built to last. It is extremely important to put our trust in those that he trusted," he added.

This is not about money, this is "a human question, about people and families", Kudelski told the daily.

Violier claimed never to have heard of La Liste - set up by the French department of foreign affairs as a counterweight to the British-based World's 50 Best Restaurants guide - until AFP contacted him to tell him he that was top of their ranking.

Such was his disdain for the star system around which the world of haute cuisine revolves, that he made little play of his victories on his restaurant's website.

"The starification of our profession has gone too far," he told Liberation.

Friends and colleagues said Violier may have been affected by the sudden death six months ago of his mentor Philippe Rochat, whom he succeeded at Crissier in 2012.

Unlike the top French chef Bernard Loiseau, who killed himself in 2003 after losing a star, Violier appeared to have no financial problems and owned his own restaurant.

Business was brisk, with former Spanish king Juan Carlos and ex-German chancellor Gerhard Schroeder among those drawn to sample his signature game and seafood dishes such as turbot with Maltese oranges.

The cook's life-long passion for hunting had led him to write a 1,000-page encyclopaedia of European game birds.

The son of winemakers from western France, he narrowly escaped death as a child when a bottle of sparkling wine blew up in his face.