Wolfgang Puck dishes on what Hollywood celebs like to eat 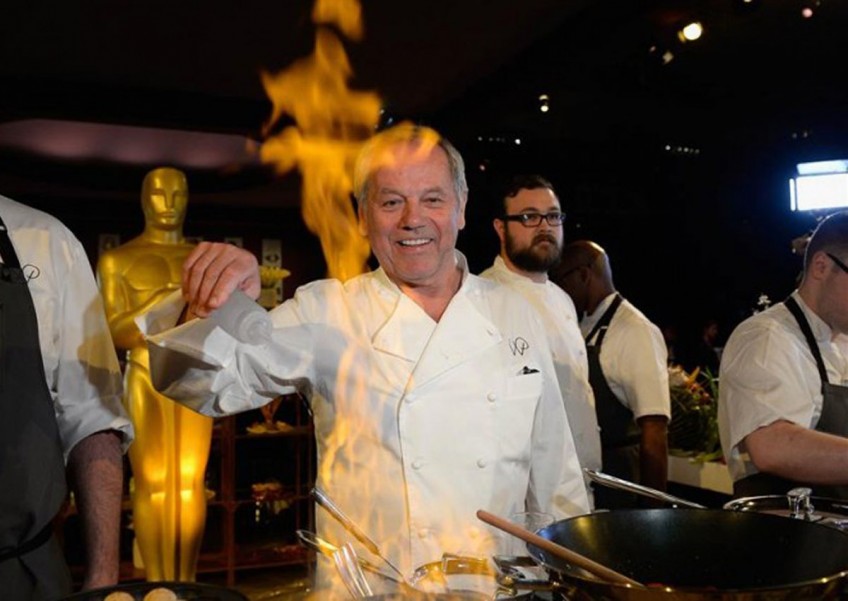 On the morning of the Academy Awards, Tinseltown's brightest stars will wake up early (or whatever qualifies for early in the celebrity world). They'll get their hair and makeup done, put on their most glamorous gowns and suits, get into their limos and head for the Oscars. They'll walk the red carpet, pose for the cameras, give interviews, then sit through three hours of the awards show.

By the time they get to the Academy Awards' official after-party, the Governors Ball at around 10pm, some will be in high spirits and others may be licking their wounds. But all will share one common animal instinct: hunger.

"I must tell you something, after the Oscars, even the vegetarians eat meat, because they are so hungry!" said celebrity chef Wolfgang Puck, laughing heartily over the phone from Los Angeles during an exclusive interview with Star2.

Puck certainly knows what he's talking about. A Governors Ball veteran, the James Beard award-winning chef will be catering the event for the 22nd consecutive year. He apparently got the gig because celebrities loved his food so much, they used to head to his restaurant, Spago, instead of the official Oscars party!

These days, Puck knows exactly what needs to be done, who likes to eat what and how to execute a menu made up of over 60 savoury items and 30 desserts, designed to feed the 1,600 people expected to attend the Governors Ball.

He has a team of 300 helping him in the two kitchens needed for the event, including all the chefs from his restaurants in the United States, as well as chefs from Bahrain, Istanbul and London. Student chefs from a nearby culinary school are also recruited to help plate the 12,000 plates that need to be produced in an hour and a half.

Before the Oscars, Puck draws up a roster so that all the 300 chefs and student chefs recruited to help him know exactly what to do on the day.

Puck also has 600 waiters - two to a table - as well as runners constantly on hand to dispense different kinds of food all the time. "It's almost the way you serve dim sum at a Chinese restaurant," he said.

An hour into service, Puck finally gets to come out to greet the attendees in person.

"I go into the dining room and talk to the people, maybe congratulate them for winning their Oscars, especially if I know them well. I remember one night I was hanging out with John Travolta and Martin Scorsese, and Martin said 'I would like to have a pasta, do you have any pasta?' And I said 'For sure!', so we went into the kitchen and made him a little Italian pasta," he reminisced.

This year's Governors Ball menu includes over 60 savoury options and 30 desserts, meant to feed the 1,600 people expected to attend the event. Photo: HBO

Although Puck says he doesn't really get into deep conversation with the stars during the event, he has gotten to know some of their predilections well.

"And then there are the obvious ones, like Barbara Streisand, she loves chicken pot pie and Danny De Vito always eats lobster. So there are a few people who are really into it," he said, obviously rattling off from memory what he has learnt about the stars.

Perhaps one of the more dramatic reactions Puck has seen in response to a dish came from Jennifer Lawrence.

Before he discloses his Governors Ball menu every year, Puck's menu choices are so hotly anticipated that he even gets calls from the celebs themselves. This year, Streisand called to make sure the chicken pot pie was still going to be on the menu and DiCaprio called to ask if there was going to be Chinese-influenced food from his Asian-fusion restaurant Chinois!

Although Puck continues to make some classic dishes year after year, he says it's because the Oscars are generally very traditional and have the "same formula". So favourites which continue to make an appearance include smoked salmon Oscar matzos, macaroni and cheese and his famed chicken pot pie, which has even found fans in royalty.

Despite the obvious reverence some of the stars seem to have for Puck's regular menu offerings, he says he always comes up with new dishes and chooses a lot of produce based on what's available on the market. If it isn't available or isn't up to scratch, he doesn't use it.

"If I put truffles on the menu for the risotto or tortellini, but the truffles are not good, I won't use truffles. We only use the best ingredients," he said.

This year's new additions include Alaskan king crab with ginger and black beans, a whole half side of bluefin tuna to make sushi and sashimi, and lobster tortellinis.

Puck is also a big supporter of local produce, and tries to include as much as possible in the menu. "We use all local ingredients, we use local farmers, we use fish which comes from our own shores, so we use everything around us as much as we can," he said.

Interestingly, Puck has also catered many times for another big celebrity event - the Grammy Awards. He didn't do this year's because he was catering legendary music producer Jimmy Iovine's wedding, but says that the Oscars are his favourite gig to cook for anyway.

"The Grammy is so big and it's only buffets at the LA Convention Centre, so I prefer to do the Academy Awards, because we can do a better job," he said.

Apparently the Academy members feel the same way too because according to Puck, they're very possessive of him and his talents.

"The people of the Academy get very jealous if I do too many other things, they want to have me exclusively now for them," he concluded cheekily.