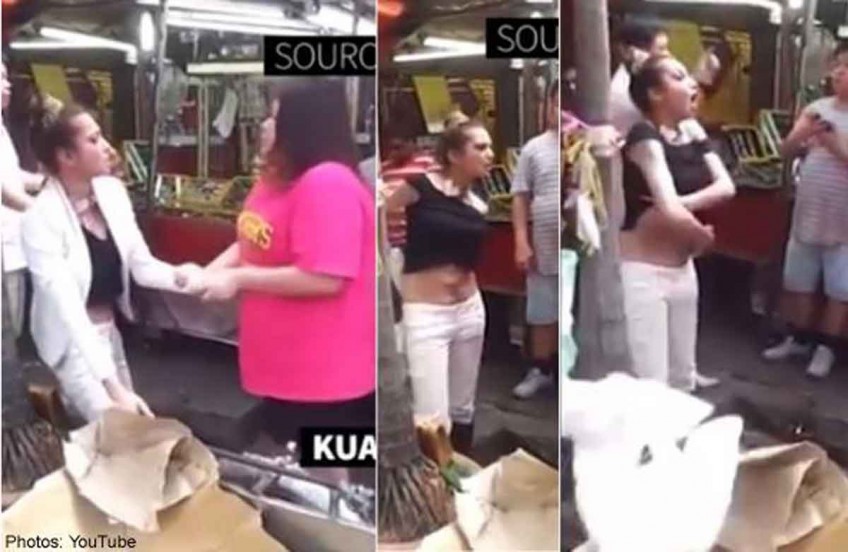 An unidentified woman stripped off her clothes to avoid paying for a meal worth around RM18 (S$7) at Petaling Street in Kuala Lumpur.

The woman went to a chicken rice restaurant with a man around 3pm on Thursday, reported Malaysia's The Star.

A nearby stall owner, identified only as Wong, said the woman had two plates of chicken rice before trying to leave without paying. "When the restaurant operator tried to stop her, she denied having eaten there.

"However, she was shown a CCTV recording of her eating in the restaurant, so she started stripping to avoid paying," said Wong, who runs a jewellery stall beside the restaurant.

The woman then shouted at the restaurant operator, who was a woman, saying "Don't do this to me" and "What is your problem, I pay you".

She then removed her clothes, to the astonishment of onlookers.

The video, which is almost two minutes long, ends with her being topless and taunting the second woman.

The video was uploaded on Thursday but has since been taken down.

Witnesses said the woman's companion, described as Caucasian, got into a scuffle off camera with the restaurant operator when the duo was not allowed to leave.

They reportedly fled when policemen arrived at the scene.

This article was first published on April 25, 2015.
Get The New Paper for more stories.