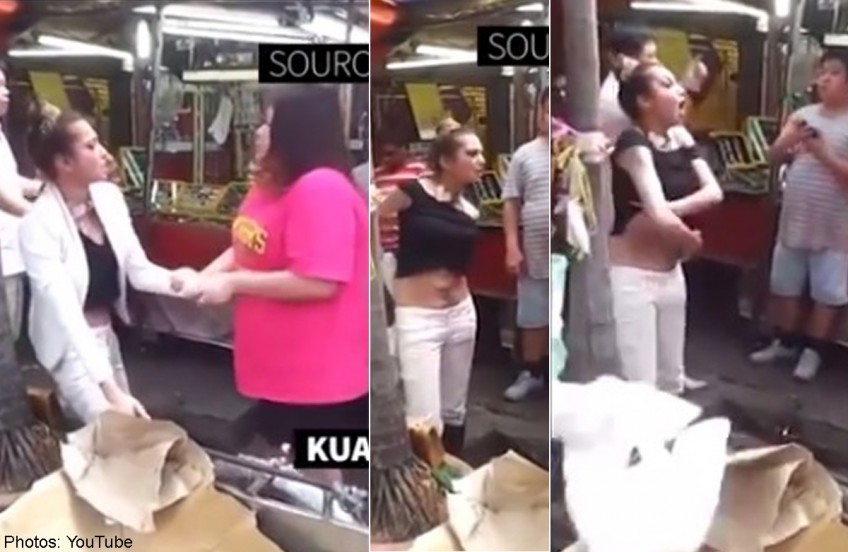 Police have arrested a 32-year-old woman who was allegedly caught on video stripping her clothes at Petaling Street.

The video, which was taken down a few hours after being uploaded on YouTube, had caused a stir on social media.

Dang Wangi OCPD Asst Comm Zainol Samah confirmed that the suspect, who is from Sabah, was arrested in a hotel in Jalan Sultan at about 5.30am Saturday.

"Initial information from the public was that she could be Iranian but it is not true. She is a Malaysian from Sabah," he said adding that police would conduct a urine test to ascertain if she was on drugs.

KUALA LUMPUR - An unidentified woman stripped off her clothes to avoid paying for a meal worth around RM18 (S$6.70) in Petaling Street.

The woman went to a chicken rice restaurant with a man around 3pm, Thursday.

A nearby stall owner identified only as Wong said the woman had two plates of chicken rice before trying to leave without paying.

"When the restaurant operator tried to stop her, she denied having eaten there.

"However, she was shown a CCTV recording of her eating in the restaurant, so she started stripping to avoid paying," said Wong, who runs a jewellery stall beside the restaurant.

A video of the woman taking off her top was uploaded on YouTube a few hours after the incident but has since been taken down.

Witnesses said the woman's companion, described as a Caucasian, got into a scuffle off camera with the restaurant operator when she was not allowed to leave.

The duo reportedly fled when policemen arrived at the scene.

According to Dang Wangi OCPD Asst Comm Zainol Samah, the woman could have been drunk.

He said the woman drank two bottles of beer at the restaurant before the incident.

"She refused pay for her meal, scolded the owner and taunted her. She took off her clothes and threw them on the ground. She was half naked with her chest exposed," he said.

Click on the gallery below to for more or watch the video on the next page.

ACP Zainol said that the incident took place at about 4.30pm Thursday after the woman refused to pay for her meal.

"She had a meal at a restaurant in Jalan Petaling and refused to pay for her food. The female restaurant owner stopped her from leaving without paying," he added.

ACP Zainol said after a while, the restaurant owner ignored the woman who left the scene.

"We received a report from the public on the incident at about 12.30pm Friday. We have not received any report from the restaurant owner or witnesses,” he explained, adding that police have yet to obtain details of the woman.