5 quirky jeans to try if you are a bold fashionista

Gone are the days when we considered flare jeans and skinny jeans courageous pieces to don.

Now, we have more, let's say, unusual types of jeans to consider.

Since it released a pair of clear plastic jeans earlier this year, our common conception of what is considered "jeans" has certainly been challenged.

Here are five quirky jean trends that might excite (or fright) the bold fashionista in you.

This pair of clear, plastic jeans got the internet talking since its release by Topshop earlier this year.

Despite many criticisms about its stiffness and concerns about what can be worn underneath, the see-through jeans - costing $126 - have proven to be popular among trendy go-getters. They were even sold out.

But hold up! Behind the crazy pants lie a very rational decision.

According to Daily Mail, Topshop's head of design, Mo Riach, disclosed that the product was created to be a talking point, not a legitimate fashion staple.

While Topshop markets the product as a statement piece, I'm sure you'll be making statements about feeling sticky and sweaty instead if you attempt to rock them here in Singapore.

How about opting for something that can last you through hot and cold weather?

The idea is that if you aren't sure about your plans for the day, you can always wear a pair of detachable jeans - suitable for walking around the city and mall. But if you decide to spend the afternoon tanning by the beach, there you have it - simply detach the pants and you're in shorts! 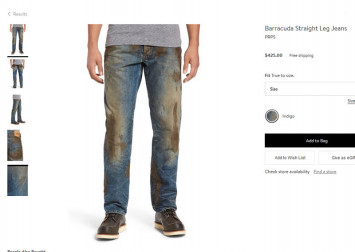 However, this pair of jeans by Y /Project is lavishly priced at $425 USD (S$590) and one might be hesitant to spend extra bucks on convenience.

You should also consider the eye-catching gaps between the shorts and its accomplice as its going to give you some oddly-placed tan lines under the hot sun.

Sequined jeans are not new, but these reflective ones will make you the light of the night - next to the disco ball.

While some might frown against the pair of flashy pants, others might find it a good way to make a statement by pairing it with a plain top.

Just be sure not to wear anything too colourful with them in case you end up looking like a painting donned with fairy lights during Christimas time.

Fishnet tights have been around for awhile now, and we have seen them on celebrities like Britney Spears and Rihanna.

But since trend-setter Kylie Jenner posted a photo of herself in fishnet worn inside of jeans, many have furiously picked up the trend.

Compared to wearing a pair of extensively-ripped jeans on its own (which is already pretty risky), adding a fishnet underneath gives a more edgy vibe, and could cover up just enough to let you still stay cool in hot weather.

It could also be a good alternative if the holes in your ripped jeans have been expanded after several washes.

Yes, you read it right. Half jeans are apparently a thing now.

The singer, Ryan Destiny, appeared at Coachella Music Festival this year with a blue jean - not a pair but merely one pant leg, shocking her Instragram followers.

While there was no explanation as to where she bought the jean or whether she cut a pair in half, the jean certainly made her stand out - with one leg, of course.

Pairing it with a bodysuit and a thick belt, Destiny sure made the style worked and started a new trend that could possibly make or break the future of jeans.