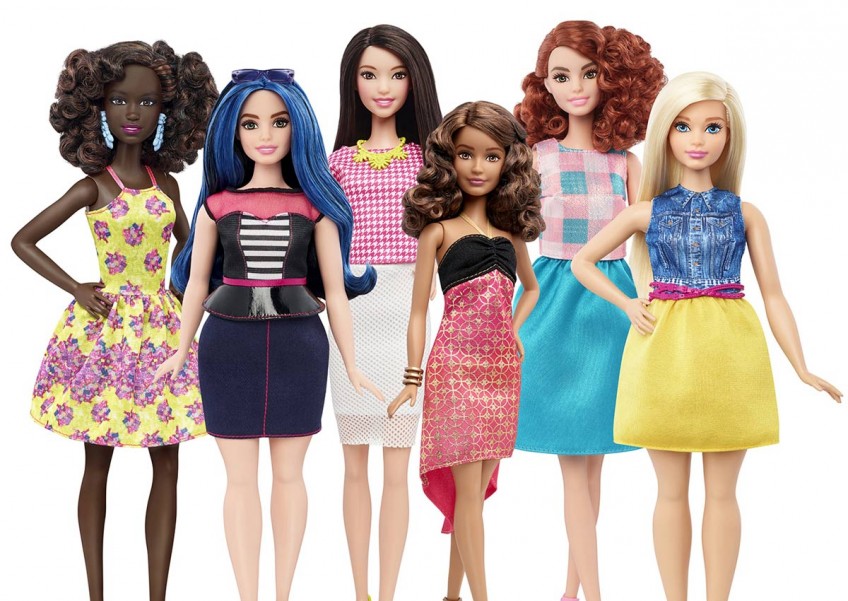 Barbie, the world's most famous doll, has a new body. In fact, she has three new bodies - petite, tall and curvy.

Some 57 years after the impossibly busty and narrow-waisted blue-eyed Barbie doll was first introduced, California-based toy maker Mattel on Thursday released the new models, which it says better reflect a changing world.

Parents and feminists have long criticised Barbie's original shape as setting an unrealistic body image for girls, despite modifications over the years.

The new dolls have seven skin tones, 22 eye colors, 24 hairstyles and new clothes and accessories. They are available for order on website shop.mattel.com starting Thursday and will reach stores later.

"We are excited to literally be changing the face of the brand," Evelyn Mazzocco, senior vice president and global general manager of the Barbie brand, said in a statement.

"These new dolls represent a line that is more reflective of the world girls see around them - the variety in body type, skin tones and style allows girls to find a doll that speaks to them.

"We believe we have a responsibility to girls and parents to reflect a broader view of beauty," she said.

The new curvy Barbie has a bigger bust, behind, thicker thighs and a protruding tummy. She landed on the cover of Time magazine on Thursday with the headline "Now can we stop talking about my body?"

So far, online reactions to the new line of dolls have generally been favourable.

Positive comments like "about time!" and "right direction" were posted on various social media platforms, but others like Time Magazine were cautious about the new development, tweeting that it was a "massive risk" to their followers.

One Twitter user also cheekily asked if Mattel is going to release a "Dad bod" for Ken, Barbie's male counterpart. According to Urban Dictionary, the newfangled term is used to describe a male body that is "softly round".

In a post on Barbie's Facebook page on Jan 28, a picture featuring the curvy dolls garnered over 3,000 Likes in 14 hours.

Facebook user Maurice Van Ispelen cheered the new release, saying that it is "great" to see different shapes and sizes for the dolls, adding that the world is being too obsessed on "skinny tight trained (bodies)".

A comment which stirred up some debate on Facebook was by Alexandra Ivanova, who said that Barbie is "not real" and questioned the need for the new dolls.

Fellow Facebook user Argiro Vailax replied that it is "good for kids to know" that we are not the same physically. While another, Maria Marshall, added that kids act out "real life" situations when they play with dolls - so why not have different dolls to represent more characters.

Huh, so Barbie's going to "reflect a changing world". I say, FINALLY reflect THE world, and how it's always looked. https://t.co/3q34bBa7Yn

Barbie sets an unrealistic standard for young people, owning her own home and car

#Barbie is adding a lot more sizes, shapes, and skin colors to its line-up, and I'm so happy for anyone with kids. pic.twitter.com/7Kp2x57oEx

How did I spend childhood playing with #Barbie and not wind up with debilitating body isues? Oh right... because she was just a f'ing doll.

These new #Barbie changes are more for moms with body insecurities than their daughters.

The classic Barbie doll, which was launched in 1959 as a doe-eyed teen in a zebra-striped swimsuit, will remain as part of the Mattel line.

The launch of the new range follows two years of declining sales of Barbie dolls around the world as girls increasingly turn to other dolls, electronic toys and tablets.

On her way to becoming a global pop culture icon, Barbie has tried out more than 180 careers, ranging from teacher to astronaut and US president. African-American Barbies and other ethnic versions were introduced starting in the late 1960s.

It only took the people who make #Barbie about half a century to make a doll that's anatomically possible. pic.twitter.com/teMluOhviz

Little boys understand that #Hulk is fantasy, but little girls are too dumb to understand #Barbie the same way? pic.twitter.com/eHg4hzLTqD