Breast-feeding mums: To cover up or not? 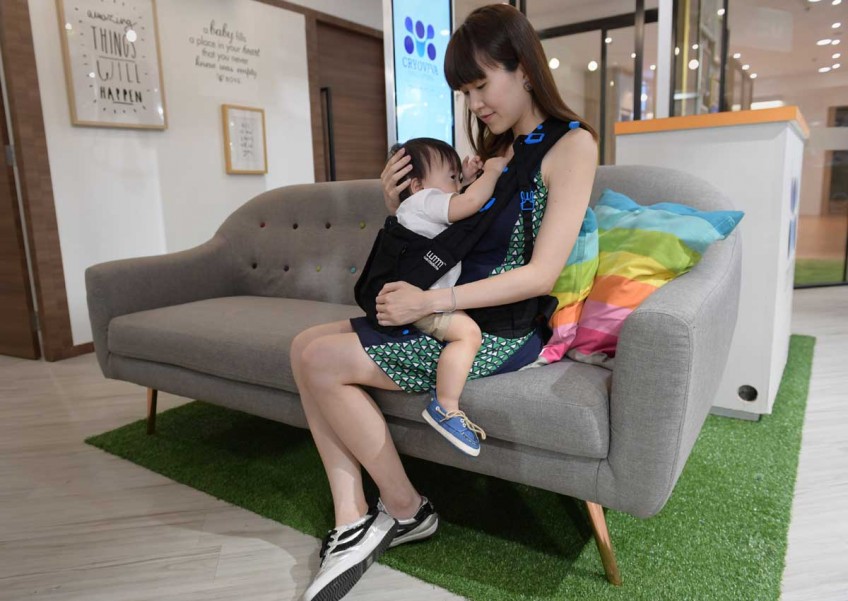 Nursing clothes allow mothers to breastfeed discreetly in public, while some prefer a nursing cover or going without it

When Mrs Sharon Ho-Norton was breastfeeding her first child 15 years ago, the nursing clothes she wore were less than ideal.

The garments - which allow mothers to breastfeed discreetly in public via concealed openings - were mostly manufactured for Western markets then and they were generally too big for her petite frame. The fabrics used were also thick, making them uncomfortable to wear in Singapore's hot climate.

The experience inspired the 44year-old mother of two, who enjoyed art in school, to design her own nursing wear for sale.

Awareness about breastfeeding was low at the time. She recalls that some local factories that she approached asked if the openings in her nursing clothing were flaws.

She eventually set up Mothers en Vogue, which sells maternity and nursing wear, about 14 years ago. It started as an online business, but now has two stores in Singapore and shops in countries such as Malaysia and Cambodia.

Her 48-year-old husband works in the education industry. Their son Brandon is now 15 and their daughter Nikki is 13.

She says: "Mothers want to breastfeed, but the issue is the amount of skin exposed when we have to do it in public. For me, as long as most of my breast was not exposed, it was good enough."

Breastfeeding in public became a talking point when Ms Cheryl Lee, a mother of three, was photographed breastfeeding on an MRT train two weeks ago without a nursing cover, which left most of one breast exposed. The picture was posted on Facebook.

Ms Lee said in a Facebook post that she does not think it is wrong to breastfeed in public and that her daughter would cry and struggle if she is fed under a nursing cover.

Many praised her for putting her child's needs first, with some saying people should stop sexualising breastfeeding. But others said she should cover up.

So should breastfeeding mothers cover up in public or not?

For Mrs Ho-Norton, wearing the nursing clothes she designed meant she was able to breastfeed her children so discreetly that people thought they were sleeping.

"I breastfed my children in public, such as in queues at the bank and supermarket. People thought I was cradling a sleeping baby," she recalls, adding that some people took a step back after realising the baby was suckling.

For Ms Janice Leong, 26, who gave birth to her first child less than two weeks ago, nursing garments do not provide enough coverage.

The lifestyle blogger, who has an interest in fashion, bought a lot of stylish nursing clothing when she was pregnant. However, when she nurses her son Christopher at the polyclinic, where she takes him for check-ups for jaundice, a common condition in newborns, she usually uses a nursing cover over the nursing clothes she is wearing.

The possibility of accidentally exposing herself, she says, may cause more stress when breastfeeding can already be anxiety-inducing.

She adds: "Breastfeeding can make you nervous, especially as a first-time mum.

"It's extra stress if the baby is crying."

While breastfeeding women can use nursing rooms, which are commonly found in malls, they are not always an option.

Ms Cindy Gan, 33, who runs a content marketing business, used to breastfeed her daughter at home before the family went out or in the family car. She sometimes looked for public nursing rooms if she had to feed Vera, who is now three.

But her daughter's slow feeding meant she had to switch things up. "I decided I did not want to be in a nursing room for an hour," she says.

She then started breastfeeding on the go using a cover, while carrying her child in a carrier underneath. Her second child Leroy, who is 13 months old, is still being breastfed.

She has had strangers approach her asking if her baby can breathe under the cover, which shocks her, but she attributes it to a lack of awareness about breastfeeding.

Ms Tan Li Lin, who breastfeeds her 6 ½-month-old daughter Lia, says she prefers to cover up because of conservative societal attitudes.

"Knowing that some people may not be comfortable with public breastfeeding makes me uncomfortable," says the 33-year-old executive coach.

She has breastfed her child in a public toilet before, an experience shared by other mothers, although she prefers nursing rooms to covers, which her daughter resists.

"Some restaurants don't have a nursing room. I felt sad for my baby when I had to breastfeed her in a toilet, but she was hungry. Sometimes I wish for more nursing-friendly facilities," says Ms Tan, who also blogs for I Love Children, a voluntary welfare organisation that advocates parenthood and pro-family causes.

"Having specific feeding times makes on-demand feeding less likely, so the mum can plan the time and place to breastfeed," he adds.

Some mothers, such as Ms Namrata Trivedi, prefer to breastfeed in public without a nursing cover. She does not wear nursing clothes either.

Instead, she says: "It's easier to wear a tank top underneath a T-shirt so my breast is not exposed."

The stay-at-home mother - she has a 21/2-year-old son and a six-month-old daughter - says nursing covers are no good for her because the child is often wriggling and prefers not to be covered. She is currently breastfeeding her daughter.

Donning a cover takes time, especially when the baby is demanding to be fed, adds the 32-year-old, who is secretary of the Breastfeeding Mothers' Support Group. The weather here is also too hot and humid to be using covers, she says.

She feels that covering up also affects the mother-child bonding experienced during breastfeeding.

"I don't like to use a cover as it creates a separation between me and my baby. We're not able to make eye contact," she says, adding that sometimes nursing rooms are too far away and the hungry baby is wailing. "I've always made it a point to be confident when breastfeeding in public. When babies are hungry, they need nourishment."

While many mothers use nursing covers while breastfeeding their babies in public, there are fashionable alternatives that also provide a lot of coverage.

Nursing wear, which allows mums to breastfeed their children quickly through convenient lifts and flaps, are for women at "different stages of breastfeeding", says Mrs Sharon Ho-Norton, founder and director of Mothers en Vogue, which specialises in maternity and nursing wear.

Nursing garments - including blouses and dresses - may have discreet openings just below the bust, at the sides or down the front. These facilitate quick nursing access, while allowing mothers to be covered up once the baby has latched onto the breast.

With women who have recently given birth, comfort and ease of nursing access are priorities, especially if they are tired from the demands of caring for newborns and infants, says Mrs Ho-Norton.

Initially, they may want garments that are roomier and drape their post-partum bodies, whereas when the baby is older and breastfeeding is more established, mothers who have lost their baby weight may prefer more fitted garments, she adds.

This article was first published on March 26, 2017.
Get a copy of The Straits Times or go to straitstimes.com for more stories.