This couple is happily married for 60 years, and growing closer by the day 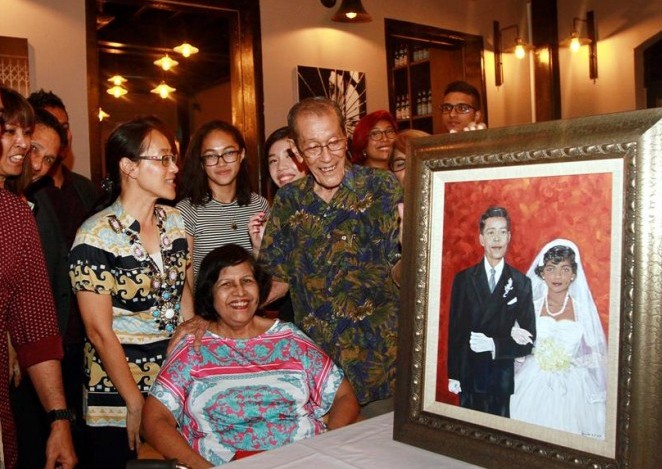 The Atkinsons with a painting of their wedding portrait which was done by their daughter Jennifer and presented to them as a gift.
The Star/Chan Tak Kong

For their 60th wedding anniversary, a couple from Klang were hosted to a celebration dinner in the vicinity where they first fell in love as neighbours.

The dinner was held at a restaurant in Jalan Raja Chulan, Kuala Lumpur, and attended by four of the couple's five children, grandchildren and family members. One of their sons was overseas and was unable to attend the do.

It was 1956 when army officer Eustace Atkinson, then 24, came to Kuala Lumpur from Ipoh. As fate would have it, he met his future wife, Philomena Clara Gomes, who was his neighbour.

After a whirlwind courtship of one and a half months, the couple tied the knot on June 16 the same year. Two years later, Atkinson was posted to Port Dickson.

Reminiscing the good old days, Atkinson, 84, says: "My wife was a quiet and very hardworking girl. Everyday after school, she would help with housework and looked after her younger siblings. That's why I was attracted to her."

After completing his Senior Cambridge at St Michael's Institution, Ipoh, in 1951, Atkinson worked for two years as apprentice to an electrical engineer. At the age of 20, he enlisted in the Malayan Armed Forces.

"Malaya was facing communist insurgency at that time and I wanted to do my part for the country," says Atkinson.

A year later, he was sent to Britain for training in military intelligence.

"I was with the British Armed Forces based in Sussex, South-East England. When I returned to Malaya, I was transferred back to the Malayan Armed Forces."

On his stint in the army, Atkinson says: "In the beginning, my wife was very worried for me. She later got used to it when she learnt that everybody watched over everybody else."

It was a double celebration for Philomena who turned 79 recently. Photo: The Star

Atkinson's last post was as a major before he took optional retirement at 34 to join the private sector.

He says: "Life was getting pretty boring with the end of communism in Malaya. I happened to meet my future boss over drinks at the Royal Selangor Club in Kuala Lumpur. He offered me a post as manager of a palm oil exporting company in Port Swettenham (now Port Klang)."

Atkinson stayed with the company until his retirement at the age of 61. But some old habits die hard. He keeps unusual hours; he sleeps around 6am and wakes up at 3pm. "It's a habit from my army days," says Atkinson, who potters around the house and watches news and sports on television.

Meanwhile, Philomena keeps busy by baking, an activity which she enjoys doing for the past 30 years. Her specialties are butter and sugee cakes.

Philomena came from a big family of 17 children. Her father, M.F. Gomes, was a musician in Bombay, India. He married her mother after his first wife passed away.

"My father came to Malaya in 1919 when he was 33. Shortly after that, he returned to India to bring his wife and three children to Malaya," recalls Philomena.

Unfortunately, Gomes' wife died of bubonic plague before he could reach India. He was hurriedly matchmade with Philomena's mother, and returned to Malaya with his new 19-year-old wife and three children."

"Loke Wan Tho (the son of business magnate Loke Yew) learnt the violin at the age of 10 from my father," recounts Philomena.

Loke went on to become the founder of Cathay Organisation in Singapore and Malaysia.

She adds: "My father's orchestra played the background music for silent movies in Coliseum cinema, and he travelled the country performing. He passed away at the ripe old age of 97.

"My mother had 14 children. With three children from my father's first marriage, there were 17 of us. Most of my siblings have since passed away. Now there are six of us left," says Philomena.

Sixty years of marital bliss is something any couple would be proud of. Like any marriage, Atkinson admits they have their share of arguments.

"After a quarrel, we never carry any disputes over to the next day. We forget about it and move on," says Philomena.

Asked about his secrets to a long-lasting marriage, Atkinson has this to share: "First of all, love overides all faults. Then, there must be give and take, and finally, loyalty. As the marriage grows longer, you get closer."