From court to catwalk 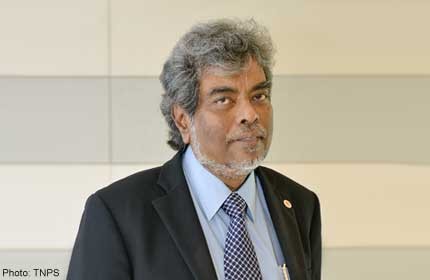 So when prominent criminal lawyer Subhas Anandan was invited by old friend Edmund Ooi early this year to be a judge on Miss World Singapore (MWS) 2013 - a pageant that Mr Ooi was organising - his immediate answer was "no".

But he eventually relented, on account of his friendship with Mr Ooi that dates back to the 1990s.

Mr Anandan's expertise has been called upon since MWS 2013 finalist Vanessa Tan became the apparent victim of online allegations that she was a "freelancer" soliciting for sex on Internet forums. Miss Tan is considering taking legal action against the netizen who made those allegations, said Mr Anandan.

Mr Anandan, 65, told The New Paper: "Vanessa has a high chance of winning her case should she choose to pursue it.

"It's definitely possible to trace who uploaded her pictures on the forum.

"The only way in which we are unable to take this up in court here is if the uploading was done on a foreign server," he said.

"But I have advised that she not take legal action because the process would be tedious and the public attention drawn to the case might end up making things worse for her."

He added: "But should Vanessa wish to sue, I will definitely help fight the case for her."

Mr Anandan, who is doing his pageant judging stint for free, is also slated to give the finalists a talk on their rights under the Women's Charter.

His aim is to educate them on what constitutes as defamatory content and ways in which they can deal with netizens' comments which they deem unfair or untrue.

However, he said that he wasn't brought on board the judging panel to do background checks on the girls.

"The girls were asked to declare everything such as criminal records.

"In my opinion, there should be leniency when it comes to smaller things.

"Say if a finalist was caught shoplifting as a teen, you don't just deny them a chance at the pageant just because of an act of folly in their youth."

What can we expect from him as an expert in the beauty stakes?

Mr Anandan chuckled and replied that he was looking for a contestant with the total package.

"Honesty and integrity are important, as are beauty, talent and one's attitude towards life.

"I've met some of the girls and they are quite impressive as they speak very well."

He joked: "Am I enjoying this? What do you think?

"I'm not really on top of the world (about being a judge)."

Being a beauty pageant judge, he said, is not quite as exciting as his everyday work.

"Compared to the rapists and murderers that I deal with, these people are quite mild."