Designer Kenzo Takada as adventurous as ever 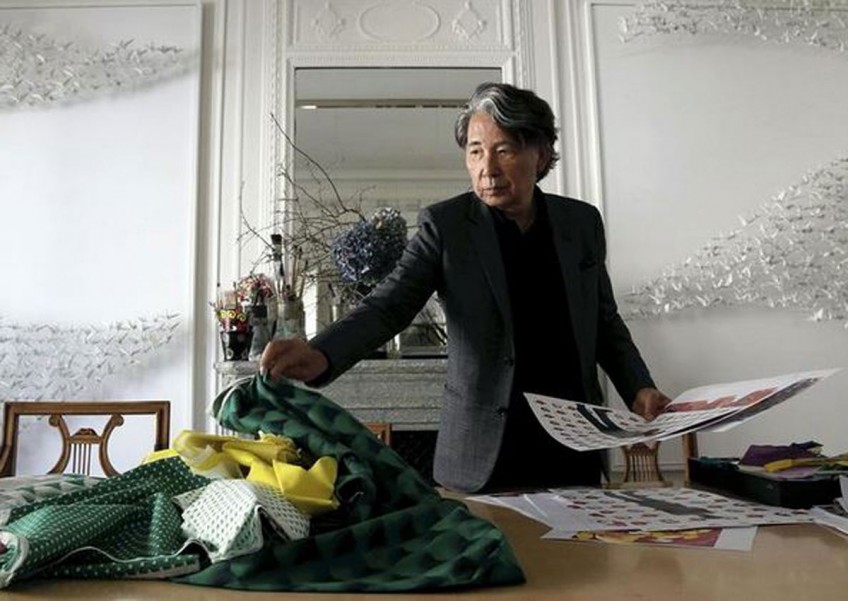 Kenzo Takada at his atelier in Paris.
The Japan News/ANN

PARIS - Kenzo Takada, an active pioneer in global fashion circles among Japanese designers, is as busy as ever in Paris this year, the 50th anniversary of moving his work base to the City of Light.

Recently, I visited his atelier, which is located in a historical building with a spectacular view of Paris and adorned with paintings and works of art. When talking about making clothes, he gave a mild smile, an indication of his warm, unaffected personality.

Based in Paris, he has made his "Kenzo" brand known worldwide. People's craze for the brand in the 1970s and 1980s is still a topic at Paris Fashion Week. It is said one of his shows was forced to shut down as too many people flocked to it.

A Hyogo Prefecture native, Takada was born in 1939. He learned clothing design at the Bunka Fashion College before moving to Paris. The capital of fashion seemed to be very sophisticated for the young Takada when he arrived there in 1965.

"I felt it was as if women had slipped out from fashion magazines and were walking on the Champs-Elysees avenue. For men, slim suits were trendy, so I couldn't wear clothes I brought from Japan as they looked so unsophisticated," Takada said.

In 1970, he held his first collection featuring clothes with ethnic flavors and vivid colors, which was accepted well.

"At that time, I wanted to use my Japanese identity as my strength in making clothes," he said. "I incorporated linear forms as seen in kimono and used Japanese fabrics and coordinated their motifs and vivid colors such as coordinating a kimono with its accessories before putting it on."

His dress using kimono fabric bearing a traditional motif of hemp leaves was selected for a cover photo for the Elle fashion magazine in 1970. It was an unforgettable, joyful event for Takada.

He is said to have been a pioneer in incorporating amusing elements into fashion shows, such as letting models walk freely to music.

"I did these things just feverishly without calculation, and they were accepted as new," he said. "At first, I asked acquaintances to be my models without fees. I used music and clothes that were just what I had at that time. We did it with no rehearsal."

Shoes for a show arrived right before the event. Buttons were being stitched to clothes up until the very moment of a show's start. This last-minute work style also stemmed from his strong desire to surprise people.

"When I moved to Paris, some Japanese residents there said to me, 'It's never ever possible for a Japanese to work in the fashion industry in Paris.' It was because Japanese were regarded as carrying a camera to copy apparel designs," he said. "But journalists in Paris evaluated my works fairly. Now, Japan and Japanese culture are really adored by young Parisians."

With the globalisation of the fashion industry, Paris Fashion Week has changed, according to Takada.

"In the 1980s, designers presented more than 100 clothes at each collection. Now, the number is about 50 at most," he said. "Due to the development of the Internet, information is delivered instantly. So transitions of fashion trends have been accelerated over the past 20 years."

He also said: "The meaning of collections has changed, too. Fashion brands tend to put more emphasis on presenting products that can sell well, rather than freely making what they want to make. I feel a bit sad about it."

He retired as a fashion designer in 1999. He is now involved in designing tableware and interiors. "Recently, I worked with an architect to help design a hotel in Cambodia," he said. "Working with young designers in their 20s and being stimulated by them is my source of energy."

Fashion may seem pale in the run of things but in fact has enormous power because clothes reflect society and casually deliver the feeling of the time to people, Takada said.

On Sept. 17, he held an event in Paris to thank people for his 50-year stay in France. He entertained about 750 guests with a Japanese drumming performance and cancan dancing. Two elephants made a surprise appearance.

He is as powerful and curious as ever. "I hope I continue to work for Japan and Paris. Both are my hometowns," he said.