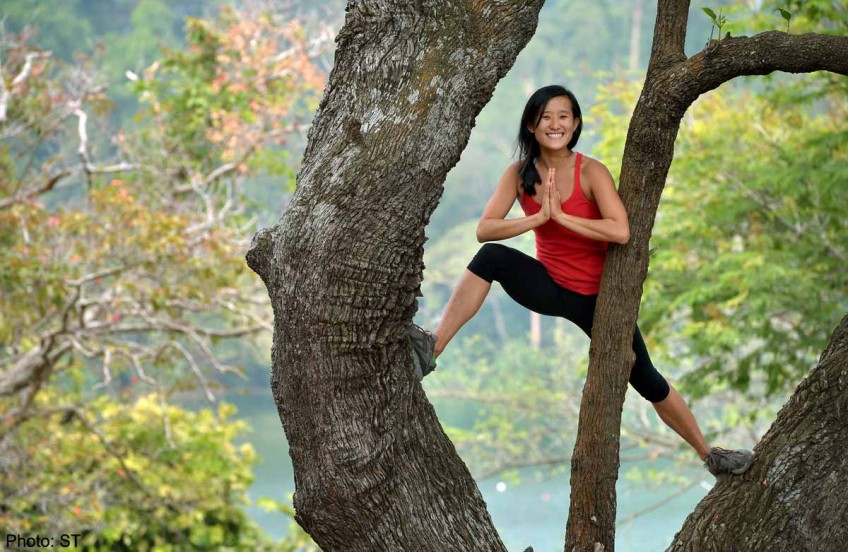 One night five years ago, Denise Lim found herself leaving the office after clocking more than 13 hours at work.

It was another typical day for the 24-year-old management consultant. But on the MRT ride back home to Sembawang that night, she could not stop thinking about her life.

"I felt really tired and I kept asking myself how was I helping other people. I was helping companies make money but I wasn't helping people at all," she says. "There had to be a better way to use my skills."

Much to her parents' chagrin, she decided to quit her job and go travelling, volunteering at non-governmental organisations in different places while figuring out what to do with her life.

Half a year later, she found herself in Guatemala, Central America, where she met a yoga teacher who told her: "You are trying to find yourself going from place to place. But a place cannot give you contentment or happiness. You've got to find it within yourself."

She has learnt Spanish and started three businesses there - a restaurant, a bakery and an online language learning school.

All her businesses have a social goal: her restaurant regularly holds fundraisers for different NGOs; her bakery is her way of introducing healthier eating options to locals; and her online school helps to find jobs for local Spanish teachers.

"I feel happy, my body feels happy," says the lean and tanned Ms Lim, who was back in Singapore recently to visit her parents.

Chirpy, articulate and self-possessed, she is the eldest of three daughters. Her father is a manager in a shipbuilding company; her mother works in the accounts department of Japanese sauce-maker Kikkoman.

She grew up with her paternal grandparents in Sembawang, seeing her parents only on weekends.

"I was a nerd, played the clarinet, studied a lot, got good grades and was a good girl," says the former student of Peixin Primary and Mayflower Secondary. Her Type A personality made her extremely competitive and hard on herself.

At Anglo-Chinese Junior College, she nearly had a nervous breakdown studying for the A levels. She ended up with 4As.

"I told myself all this studying and no learning had to change when I entered Singapore Management University," says Ms Lim, who studied business and sociology on an American Chamber of Commerce scholarship.

That change came by throwing herself into the deep end and getting involved in activities which would test her mettle.

In 2006, her first year in university, she signed up for SMU's Dare to Dream expedition where she and several other undergraduates took five boys from the Singapore Boys' Home to scale Mount Kilimanjaro, the tallest peak in Africa.

"It was very tough because I'd never exercised before that," she says with a laugh.

Among other things, their six-month training programme involved long-distance running, running up and down the stairs of 40-storey buildings and several jungle trekking expeditions, including a seven-day hike up Gunung Tahan which, at 2,187m, is the highest point in peninsular Malaysia.

The Kilimanjaro trip taught her one thing. "That's when I realised that as long as I set my goal and worked towards it, I could achieve anything I wanted."

The next year, she headed to Kolkata where she spent nearly three months working with READS India, a small NGO focused on creating educational opportunities for the marginalised and underprivileged in rural areas.

"It was the first time I went anywhere by myself. There was a list of organisations for me to choose from; I picked the one which I thought would be the hardest for me to get used to," she says.

The poverty was sobering and led her to launch Project Kolkata to help raise funds for a free school the NGO was planning to build in a village outside the city. Heading a team of 18 other undergraduates, she raised $20,000 for it.

In her final year, Ms Lim - who was on SMU's dean's list for two years - won an award to go on a foreign exchange programme to Pompeu Fabra University in Barcelona. After completing the programme, she stayed on in Spain for another seven months and worked for a spell as a Chinese translator for a tour company.

On her return, she snagged a much coveted job with consulting giant Accenture. But her stints abroad had changed her.

"The exposure, talking to different people, the poverty I saw - I realised that not everyone's priority is to make money," she says.

Doing something which has a positive impact on people's lives, she decided, was more important. That was what led her to quit 11/2 years later.

"I was earning twice as much as my mother so she could not understand why I was giving up all these big opportunities. My father just said, 'One year, I give you one year'."

With $20,000 of her savings, she set off on her big adventure. She had a vague idea that she wanted to end up in Central America where she could learn Spanish and do volunteer work with the many NGOs in the region.

"I met a lot of other travellers, all of them were lost. It's a cliche but many people travel because they don't know what they want to do with their lives," says Ms Lim who backpacked through Asia before going to Canada and ending up in Guatemala.

Doubt, she confesses, was a constant companion.

"I'd get panic attacks," she says. "All my friends were earning all this money, becoming managers so what was I doing? I was doing what I believed in but what if I were wrong?"

Meeting the yoga teacher changed her life, and she decided to stay in Guatemala for a while. He is now her boyfriend.

"I had planned to be there for just three weeks but it's now been four years," says Ms Lim, who lives in Quetzaltenango, a Mayan town in the highlands.

The very affordable standard of living was one of its biggest draws in the beginning. "I could stay there for three or four years without working whereas I would use up all my money within a year if I continued travelling. I can easily survive on $300 a month there," she says.

She spent her first few months doing a lot of yoga - she is now a yoga teacher herself - as well as learning Spanish and rock climbing.

"I'd never cooked in my life but I had a lot of time so I started looking up recipes and trying to make char siew pau (pork buns), dumplings and all the dishes from home that I missed," she says.

The idea of setting up a restaurant came after a local asked for her help to plan the menu for a Thai restaurant he wanted to open.

But the plan fell through so she decided to set up her own restaurant on the second floor of an old colonial building.

"There are no South-east Asian restaurants there. And every time I cooked for my friends, they would go, 'This is delicious!'; and they'd want me to make more."

It took her just one month and about $3,000 to get it up and running although preparations were anything but easy.

"I had to talk to lawyers, tax folks, furniture people and do everything in Spanish," says Ms Lim who painted the restaurant herself and borrowed a fridge from a friend to save costs.

"I remember getting a table from a furniture store, putting it on my head, and walking 15 minutes back to my restaurant," she says, adding that her 40-seat La Esquina Asiatica restaurant costs her US$200 (S$278) rent a month.

Her small menu comprises mostly items she enjoys herself, such as satay, pad thai (Thai fried noodles) and dumplings.

Business was slow the first month, but word soon spread. The restaurant broke even in four months and now makes a tidy profit. The popular online travel site TripAdvisor rated the restaurant 4.5 stars out of five.

"I guess locals and a lot of tourists are sick of eating beans and tortillas all the time," she says.

Her next project was setting up a website to connect Asians interested in learning Spanish with language teachers in Guatemala.

About 10 months ago, she teamed up with a local pastry chef to set up an artisanal bakery which she named Mandarina.

"I'm the bread person, she does the sweets," says Miss Lim, who recouped her investment of $2,000 in six months.

She adds: "We are trying to take our products into local schools for the children and experimenting with an affordable nutritional snack bar for the rural children."

In fact, all her businesses have a social agenda.

"We hire locals who don't have experience, train and equip them with skills," says the entrepreneur whose staff include single mothers.

Fundraisers are regularly held at her restaurant, the most recent one in aid of a fair trade women's weaving association and a free rural clinic.

Of late, she has been thinking about setting up a social business consulting company that helps locals start small businesses.

"Ideally, business students or professionals all over the world could be matched with a potential business owner in a developing country to start a business. The consultant would get real life experience in starting one, and the business owner would get professional help, so it's a win-win situation. Both potentially could benefit from profits," she says.

Meanwhile, her parents still hope that she will return home soon. It is something Ms Lim thinks about often too.

"I'm turning 29 soon. All my friends have a BTO," she says referring to built-to-order Housing Board flats. "Or they are getting married and having kids. My life is so different from theirs."

But she harbours no regrets.

"That's the big question for me and for a lot of people. We are all placed in this world to do something. I'm still trying to find out what mine is."