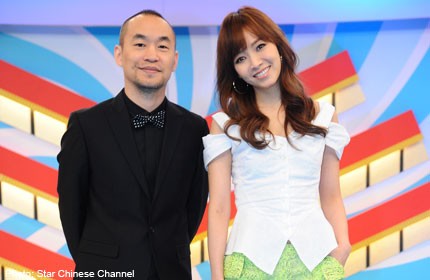 TAIWAN - Her blissful married life has made actress-host Patty Hou feel more confident and secure, and the Taiwanese says she is now ready to have children.

"The prospect of bringing up a child is rather daunting so I feel a little nervous," said the 35-year-old.

"I wouldn't mind either a boy or a girl, but if I don't have a daughter, I will definitely regret it."

Together with singer-host Jeffrey Huang, 40, from the Taiwanese hip-hop group Machi, she was speaking to Life! in a conference call to promote a new show.

The two are co-hosting a Taiwanese variety show called Wow! Good Match!, which looks at gender differences on issues relevant to young people, such as relationships and careers.

For example, one episode sees Hou quizzing bachelorettes about their lifestyle and personal grooming habits as male guest stars critique the women's looks and demeanour.

So how can Hou tell if someone is in a relationship for the long haul?

"I don't think you can ever categorise relationships as short-term or long-term," she said.

"If the feeling is right and both of you can be true to yourselves, then I think the relationship is a sustainable one."

Hou, who married 39-year-old Taiwanese securities trader Ken Huang in 2011, has clearly moved on from her previous high-profile relationship with Mandopop superstar Jay Chou. The couple split in 2006 after dating for a year.

Following the break-up, she reportedly got emotional whenever she was quizzed about Chou. But in an interview in 2008, she said she had learnt from past relationships and wanted "to be brave and just to love".

A mass communications graduate from the University of Southern California, Hou first started work as a news anchor before venturing into the entertainment scene in 2005. She acted in dramas such as Sweet Relationship (2007) and hosted variety shows such as Guess Guess Guess (2011) with Taiwanese host Jacky Wu.

Hosting a show that deals with candid opinions on gender differences has opened her eyes, Hou said.

"My worldview was very limited before I worked on this show," she said. "But I've gained a lot of new insights into what guys actually think and have become more open-minded. I never knew there are so many things that guys think about, but don't usually say."

Huang chipped in: "For example, some guys might date girls merely because they want to sleep with them. But if a girl watches the show, she can learn to pick up the warning signals so she will know what sort of guys to avoid."

While Hou and Huang are familiar with each other, they admitted that it took a while for them to get used to hosting a show together.

"Patty is very proper, she doesn't usually joke. But she now has her own brand of humour," said Huang.

Hou, too, was initially apprehensive about working with Huang because "he looked very fierce and didn't speak much on the show".

"But he's now like my older brother. He's actually a very straightforward guy. I used to think I knew guys well, but I've never encountered straight-talking ones like Jeffrey before," she said.

She added with a laugh: "After knowing him, I've begun to treasure my husband a lot more. Jeffrey tends to have many dirty thoughts and talks about them often. My husband has never been like that."