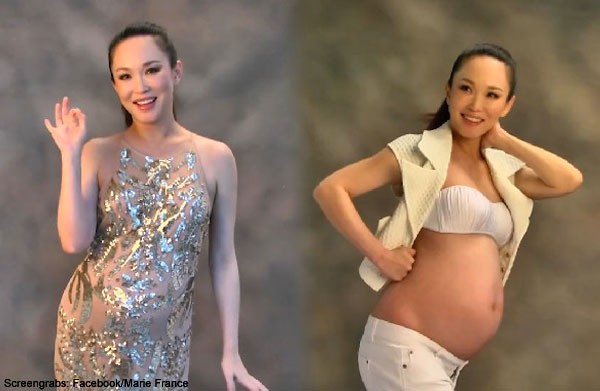 Said Fann: "He (hubby Christopher Lee) wasn't around, he was in Taipei filming. And actually for the first four months I was like, 'how come the baby is not kicking? I cannot feel anything'.

"So one day, I was at the dining table writing some stuff, and suddenly I could feel the baby kick. I was like, 'oh, baby, finally!'"

Fann also shared that she has been "eating like a dinosaur" during her third trimester, and craves for fruits the most, including durians.

The actress is on the final stretch of her pregnancy and is expected to give birth next month.

Here is a transcript of the behind-the-scenes interview by Marie France:

I always wanted to be a mother, from the moment we decided to get married, we planned to have a family, but it's just that it's planned for us to have a very long honeymoon, so once we knew that we were having a bundle of joy we were so, so, so happy.

How she felt as she saw her body changing:

Actually the first time it's more on my tummy, and of course my waist, and of course my chest, but that's the last thing I have to worry because the first thing on my mind is, I want a healthy baby. So I've been eating a lot of healthy stuff, good stuff for my baby - and putting on weight is the least of my worries.

On her food cravings:

Right now since I'm in the third trimester I'm eating like a dinosaur, so it's quite scary.

How she dealt with morning sickness:

The first trimester was very, very bad. Moodswing-wise I was quite ok, but I had no appetite at all. I didn't feel like eating anything, I had a food aversion and the only thing I craved during that time was lime juice and lime juice, and lime juice. So everybody was quite worried about me, and especially Chris because he's overseas filming. So every day everybody (will be) calling me and saying: "Eat, eat, eat..."

But I managed...Once I was in my second trimester, everything just brightened up.

Can you share your reaction to the first sonogram?

The sonogram... I didn't know how to look at it, I cannot visualise, and they had to... my gynae had to teach me, like, this is my 'princess egg', so it's a bit difficult to tell because it doesn't look like a baby yet. But I'm still happy to see that there's a heartbeat.

Your baby's first kick. What was your reaction?

No, he (Christopher) wasn't around, he was in Taipei filming. And actually for the first four months I was like, 'how come the baby is not kicking? I cannot feel anything'. Every day, I was waiting for the moment that the baby will kick. So one day I was at the dining table writing some stuff, and suddenly I could feel the baby kick. I was like, 'oh, baby, finally!'

Have you chosen your baby's name?

Argh, we had such a difficult time choosing a name, because... we spent so many days deciding on what kind of name, but we haven't come up with a name yet. But I'm sure after I give birth, we're going to consult a geomancer to decide on the Chinese name, then after that maybe we'll come up with an English name.

Have you done any preparation for your delivery?

I'll be attending an antenatal class next week, and Chris will be attending the class with me. And of course, Chris is a very active partner, he makes sure that he's with me, like when I exercise, or if I attend any class, and he wants to be with me everytime I go to see the gynae. He's taking leave till after my confinement, so yeah, I'm lucky to have such a loving husband.