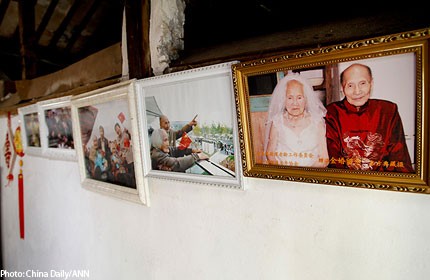 Many dream of finding everlasting love, but few have the tenacity to embrace it.

Some crumple under the weight of child rearing, keeping home or getting along with in-laws. Others give up because of money issues, illness or the loss of the first throes of passion. One Shanghai couple went through all these - as well as a foreign invasion, civil war and "cultural revolution" (1966-76) - and is still together to tell the tale. Zhang Mucheng and Xu Dongying were married in October 1930, strangers going into a union arranged by their parents. Zhang doesn't remember much from their first meeting, he told local media, except for the impression that his bride "looked pretty short".

Eight children and 83 years later, they've become partners in the deepest sense. Despite developing cataracts in both eyes, 105-year-old Xu watches her husband's favorite TV sports programs with him every day. Zhang, a year younger, sits with Xu for her daily dose of Suzhou ballads though he can no longer hear well.

The centenarians may have the world's third longest-living marriage today, according to reports. And the couple says they'd like to break the Guinness World Record for the longest marriage, held by a US couple, which stands at 86 years, nine months and 16 days.

How do you stay married to the same person for close to a century and survive your differences, big and small?

"Our relationship philosophy is, 'To lose is to gain'," Zhang, a retired traditional medicine storekeeper, tells the Xinmin Evening News.

"If you're unhappy about something, don't dwell on it Think more of your partner's welfare," he says. "Try to understand each other's point of view, give in to one another, forgive each other."

At a time when China's divorce rate is climbing - the mainland saw 3.1 million divorces last year, up 8 percent from 2011, according to the Ministry of Civil Affairs - younger couples can sure learn a thing or two about humility and self-sacrifice. Marital breakdowns caused by trivial arguments, like those over home decor, dinner plans and clothing purchases, have become increasingly common among China's generation of single children, say marriage experts.

One couple even got to the brink of divorce because the wife inadvertently broke wind and embarrassed the man in front of his business partners during an important meeting.

"I explained to them it wasn't a big deal," says Ming Li, deputy director of the China Marriage and Family Counseling Center. "So they decided to stay together." Young couples nowadays have a hard time giving way to each other, she says in a phone interview from their headquarters in Shanghai. "Their parents have doted on them and they've always gotten their way. They don't know what it means to give and to forgive."

Two years ago, Lin Tianfu exhibited Love of Half a Century at the Pingyao International Photography Festival. His black-and-white images depicted 200 elderly couples from all but one of China's 56 ethnic groups, along with a summary of their love stories.

The photographer from Taiwan undertook the massive project in 1997, saying it was something "fragile modern marriages can use for reference".

After 14 years of criss-crossing China in search of ordinary couples who have been married at least 50 years, what insights has he gained from these enduring unions?

"Couples should empathize with each other, think more about their partner's welfare and not be too materialistic or self-centered," says Lin, his words echoing Zhang Mucheng's own attitude toward marriage.

The subjects that left the deepest impression on him, Lin says, are a couple from Yunnan province's Naxi ethnic group. During the "cultural revolution", the husband was charged for being a counter-revolutionary and imprisoned for a year.

On top of being a mother, his wife took on the role of family breadwinner while encouraging him to stay hopeful. After his release, she continued to support the family financially since he was too sick to work.

He later founded an herbal clinic that now serves both Chinese and foreigners.

All marriages go through turbulent times, and those that last apparently have two common pillars: commitment and clear expectations.

These couples unceasingly work on their problems because divorce to them is "not a consideration", says Regina Ho, a family and relationship counselor with Oasis International Hospital in Beijing. They understand marriage, she says, as a life-long commitment.

At the same time, they have fewer blowups because expectations are clear. For instance, wives accept that husbands need their boys' nights out (as opposed to spending every evening with the family) and that a spouse comes with in-laws (so you try to get along with them rather than constantly complain).

"My feeling is that people today are more dissatisfied with their marriages because they have so much more unmet expectations," Ho says.

In the face of social changes that have led to higher Chinese divorce rates - like more liberal values and women's financial independence - marriage researchers are suggesting that pre-marital and post-marital courses be institutionalized.

"Some people think sex is love, physical attraction is love, or money, a house and a car is love. Love has become commodified," says Chen Yiyun, a sociology professor at the Chinese Academy of Social Sciences, who studies Chinese marriage and family.

"Nobody teaches you how to be a real husband or wife.

"If you can invest so many years of education for your career, why can't you do the same for a marriage you're supposed to have for 50, 60 years or more?" she says.

In the China of old, it was Confucian principles that taught men and women about family commitment and responsibilities. The elderly Zhang himself credits Confucianism for instilling in him the importance of harmony in his eight-decade marriage.

The challenge now is for young Chinese men and women to find their way back to the bedrock of a long, happy and healthy marriage. Otherwise, everlasting love will always remain just beyond their embrace.