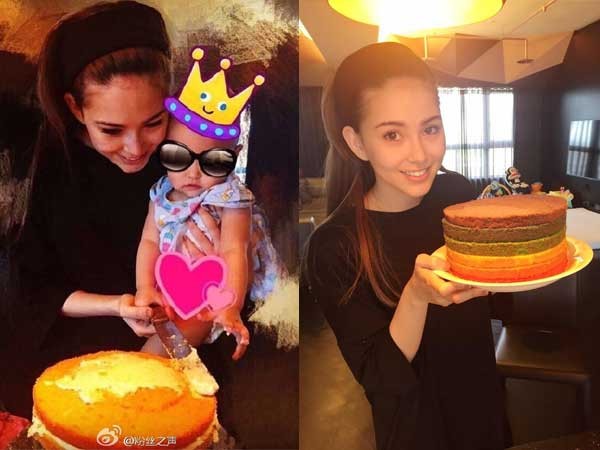 Her daughter, Hathaway, was born on July 10.

Quinlivan described in a Facebook post on July 8: "I never thought that I would have the patience to bake a cake for seven hours, midway through (Hathaway) even woke up to check on the cake. Thankfully there's you (Hathaway) or else I would have never been able to do all this." In a photo uploaded on the social media platform, she can also be seen smearing butter on the cake with the help of her daughter.

Joining in the celebration, Chou dedicated a song to his daughter at his concert on Sunday night (July 10) in Beijing, which brought Quinlivan close to tears, media outlets reported. Chou posted a photo on Weibo after the concert, expressing his love for Hathaway and wishing her a happy birthday.

Baby Hathaway was not the only celebrity baby in the social media spotlight.

It was a a double treat for Chinese fans of Zhang and the Descendants of The Sun star.

Along with the photo, she captioned: "Your 'husband' is very warm and loving. Xing Xing, my precious, are you pretending to be calm?"

"Husband" is commonly used among Chinese fans to address Song because of his popularity.

The post went viral and has attracted more than 13,000 replies as of Sunday.

The reason behind the odd pairing is because both Zhang and Song had been filming together for Chinese cosmetic brand Proya, and Zhang had brought her 7-month-old daughter to the filming site.