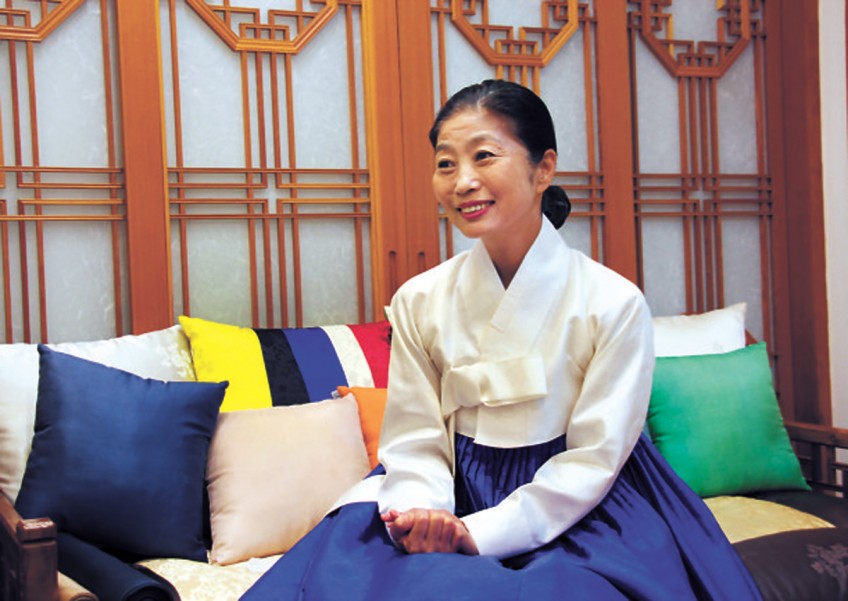 Hanbok designer Damyeon Lee Hye-soon made headlines a few years ago when it became known that a restaurant at a five-star Seoul hotel had refused to let her in on grounds that her hanbok posed a danger to herself and fellow diners.

Apparently, the restaurant was concerned that someone might trip over Lee's skirt.

That episode brought to light the prejudices that many Koreans harbour about hanbok and how poorly we treat our own traditional clothing.

Damyeon has been wearing hanbok every day for some 30 years, starting a couple of years after she began her business.

"I suppose it felt awkward at first but people who saw me said it was pretty," says Damyeon at her shop in Cheongdam-dong, Seoul, on Wednesday.

In the posh Cheongdam-dong neighborhood where her shop is located, Damyeon is known simply as "the hanbok lady." The image of the petite designer walking to a nearby Italian restaurant with hanbok skirt billowing behind her is unmistakable.

Damyeon, who created the luscious hanbok for the film "The Scandal," specializes in haute couture hanbok, especially for weddings and other ceremonial occasions. Her work has been exhibited in Paris and showcased at Art Miami.

Recently, Seoul Mayor Park Won-soon wore a hanbok made by Damyeon, complete with traditional shoes, to a meeting in the Vatican.

Damyeon begins the interview by raising a concern shared by many who worry that young Koreans, as well as foreign travellers, taking selfies against the backdrop of palaces in rented hanbok will be misled into thinking that they are wearing authentic hanbok.

Over the past few years, hanbok for hire available at rental shops have been altered greatly from the original form, Many now have a hoop undergarment and flower-shaped ribbons at the back, features never before seen on hanbok

"Our children don't see us wear hanbok except on television dramas and films," Damyeon says, explaining how this has influenced young people's perception of hanbok.

"Young people do not know that hanbok they see on the screens have been exaggerated and altered for dramatic purposes," she says. "And this is why we have young people walking around palaces, taking selfies in those ridiculous costumes, thinking that they are wearing hanbok."

Damyeon understands hanbok not just as a designer but someone who wears it every day.

"I feel it with my body, my heart and my spirit," she says.

Likening the spirit of hanbok to the spirit of seonbi, or Confucian literati, she explains that there is no feeling of "excessiveness" with hanbok. That observation runs counter to the common perception of hanbok as being too fine, too elaborate and difficult to wear.

In her effort to make hanbok for everyday ware at affordable prices, she partnered with a local fashion brand to produce ready-to-wear hanbok a few years ago. It wasn't too long before the company that had proposed the idea lost interest and the business was shut down.

Rather than having just one fancy hanbok kept in a box most of the time, Damyeon suggests keeping several hanbok that can be worn for different purposes and occasions. That way, wearing hanbok would not seem so out of place.

"I wish that hanbok would be taken as everyday wear. But part of me knows that that is asking too much," she says. "My hope is that when people wear hanbok for ceremonial occasions, that they wear it properly."