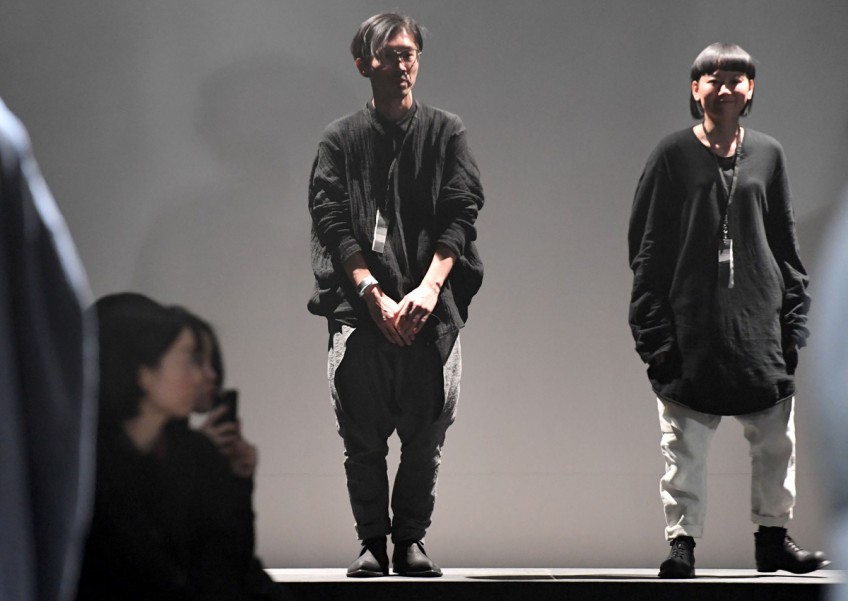 Their edgy installation made much of the circle symbol of their brand, presenting circular skirts, capes and coats cut in the round, frayed hems and two-textured knit suits in an ancient meets futuristic look.

Difficult to imagine on the high street, but easy to see the artistry that caught the imagination of one of the world's biggest music stars known for her edgy, boundary-pushing fashion.

It was a distinctive, memorable capsule collection showcased on models with blank faces and helmets of blue wigs stuck down low on the forehead, spear-like projectiles sticking out of slicked-back buns.

Hitoshi and Keiko Korogi have never met Gaga, but the New Yorker has worn their designs several times since visiting Japan shortly after the 2011 earthquake that left more than 18,000 people dead or missing.

"She asked us to send costumes for her 'You And I' music video but she didn't wear them in the end."

The Gaga effect drove six times more traffic to their website but while some shopped, there was less impact on sales, perhaps a reflection of the commercial limits of the singer's outlandish style.