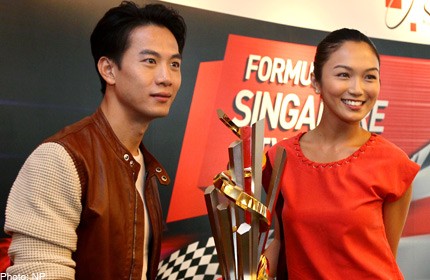 SINGAPORE - She said it best, when she said nothing at all.

This year, the world-class motorsport event will take place on Sept 22 at the Marina Bay Street Circuit. Love seemed to be in the air as the couple, who will appear at upcoming F1 roadshows as celebrity "racers" participating in the official F1 racing game, frequently indulged in public displays of affection.

Even though Qi and Peh have been dating since April - after she ended her four-year relationship with American DJ-host Bobby Tonelli - there are still doubts in some quarters if the high-profile whirlwind romance is for real.These two have, after all, won awards for their acting chops.

But Peh, especially, seemed to be trying hard to prove detractors wrong at yesterday's event. Whether it was all for show or they're truly still enjoying a honeymoon phase we couldn't really say as personal questions were not allowed.

Peh, 30, constantly touched Qi on the arm when she spoke to him and would affectionately cling to his arm when they were sitting down together or walking around.

Qi, on the other hand, was literally speaking a different love language.

For someone who comes off often as the strong and silent type, he spoke of his love the first chance he got to address the media.

Happy to be here

Said Qi, 36, on being a fan of F1: "I'm actually filming in Beijing now so I'm very grateful that I was brought back here to attend this. "Every year I could only watch F1 on TV, so I'm very happy to be involved in (a much bigger way) this year. "Especially if I can be together with Joanne."

While Peh blushed happily like a teenage girl, those at the conference hooted and cheered at Qi's declaration.

Of his sweet words, Peh told The New Paper after the press conference: "I'm also happy that he's here for the event."

When asked who was the better driver between the two, Qi replied, grinning: "Obviously, it's her (Peh). "I got into a car accident a year ago so I'm much more careful now, I have slowed down a lot." Said Peh: "I've learnt a lot from him about slowing down.

"I used to like getting everywhere in the shortest time possible. "Now I try to slow down and enjoy the ride." Peh's face lit up with delight when the issue of their dream cars came up.

That's because when Qi said "Cadillac" she couldn't believe that she was thinking of the same car.

Said Peh: "This is going to sound really cheesy but I was going to say that too! "The one that I like is the black vintage Cadillac."

Especially when the four celebrities and self-proclaimed F1 fans had to compete against each other in F1 simulators and clock their fastest lap times in the official F1 racing game.

Peh had said earlier: "I think women make better drivers because we're not so kan cheong (Hokkien for anxious) and so we won't get into so many accidents. "It may end up being a girls versus guys match." Joked Lin, 31, in reply: "I don't think so because Yuwu helped to block us so that Joanne could advance further along."

To this, Peh could only smile and cover her face shyly.

During the race, Qi made everyone laugh when he got disqualified after making a mess on the track.

He then tried to help Peh avoid a similar situation by reaching out for her steering wheel.

In the end, Tan came in first place, followed by Peh and then Lin.

Qi had, at one point, got stuck in a corner on the track and couldn't get out of it. When Peh was asked why she didn't try to help him, she burst out laughing and exclaimed: "It's a race!"