Kids getting older? It'll grow on me 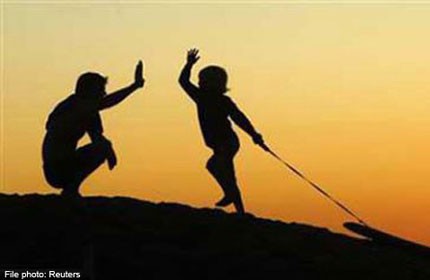 At 6.30AM, I peeled open one bleary eye in bed to find a silhouette sitting in front of me.

It was my son. Getting ready for school, he sat studying me for a few minutes.

"Mummy," he finally said, in a casual, let's-talk-about-the-weather tone. "My school shoes are getting very tight. I find it hard to walk in them."

The thought of my poor son walking around in shoes that are pinching his feet filled me with guilt. Why hadn't I checked earlier if he was outgrowing his white lace-ups?

Then again, those shoes had been bought only at the beginning of this year, when he started primary school, and had been roomy then.

"Okay, okay, we will go buy you some new ones after school," I said quickly.

He nodded, as though to say "Thanks, mate", then left the room quietly to go downstairs to eat his breakfast.

The full force of our highly civil exchange hit me only a few days later: My elder son has gone from a cherub-cheeked, gap-toothed toddler to a self-assured young man. All in seven years.

"Why do kids grow up so fast?" I have asked myself often, like countless other parents. Will the feeling - half wonder and half panic at the relentless maturing of our offspring - ever subside? Or will it merely intensify as we get more and more infirm, and our children more and more independent?

I remember rushing home from work to play with my firstborn when he was little. He would gaze up at me from his playpen, chuckling as we played peek-a-boo.

These days, he returns home from school, greets me casually, then potters about the house, doing his own thing. As the contrast between what that baby of years ago and what the boy of today can do widens, the pang in my heart deepens.

It is the same with my younger son, who turns four later this month. "Why is my birthday not here yet?" asks the little brother once every few days.

I tell him it will come soon, but I secretly wish it will take its time to arrive. Already, he is outgrowing my attempts to baby him.

He is getting too big to hold lengthwise and rockabye. At night, I mistake him for his elder brother in the dark, because I still think I have one toddler and one infant.

The Supportive Spouse feels the same way, too.

One night, as our younger son lay cheek-to-cheek with him on the couch, watching TV, Papa murmured: "Aiyah, I wish I had held you more when you were a baby." I wish I had, too.

Nostalgia makes you lose your marbles.

One day, the SS told me he dreamt that I was pregnant. I thought it was a nightmare for poor tired hands-on Papa, but he told me we were very happy in the dream.

For a few crazy days, I contemplated having a third baby to have a not-growing-up-so-fast-yet child. Even if that baby turned out to be another boy. Or another monkey.

Still, a backlash against the "kids growing up so fast" sentiment might be gathering. Earlier this year, American blogger Glennon Melton wrote a piece in The Huffington Post titled "Don't Carpe Diem", complaining about people telling her to "enjoy every moment of parenting".

Daddy blogger Steve Wiens at The Actual Pastor begged readers not to say the phrase to friends with children - "Not because it's not true, but because it really, really doesn't help."

Yet, if one thinks of the phrase less as a patronising "been there, parented that" comment, and more as a perspective-setting lament from one's future, older self, it does help.

Thinking about my kids becoming teens in a few years' time makes me want to be nicer to them; to stop scolding them for being rowdy children.

Over Children's Day last week, I bought them new toys. We probably have five to eight of those left to celebrate together, so why not enjoy every moment?

Excuse me now, while I nip out to buy some school shoes.