Korean fitness model weighed 58kg at 13: 'No one dared to bully me' 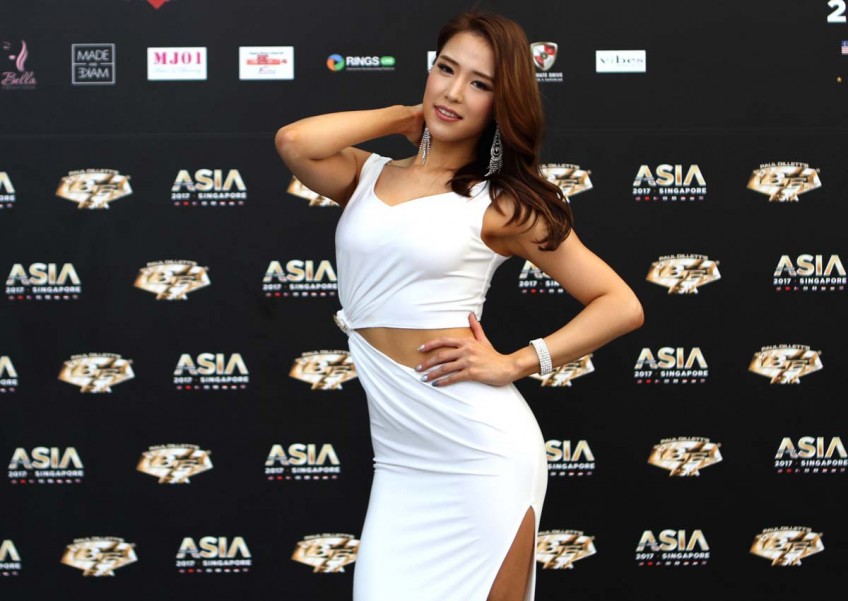 Miss Jun Minji has maintained her figure since she decided to change her lifestyle.
The New Paper

As an overweight child, the irony that her mother was a model wasn't lost on Miss Jun Minji.

But the 26-year-old South Korean has blossomed into a beauty and is also a personal trainer, fitness model and World Beauty Fitness and Fashion (WBFF) Asia Pro Card holder.

Set to take centre stage in Singapore for the first time on April 30 at Marina Bay Sands, WBFF Asia 2017 is a fitness modelling competition that rewards winners with exclusive modelling contracts, cash prizes worth US$3,000 (S$4,200) and coveted certificates called Pro Cards that show participants' entries into the WBFF world.

Over 100 people have signed up for WBFF Asia 2017, which features categories like Male Muscle Model and Diva Bikini Model.

She also took part in the WBFF Worlds (Canada) and was among the top 10 finalists.

Miss Jun was in town last week with fellow WBFF Asia ambassadors Ahn Jaesung and Kim Jiyeon to promote the event and lead a mass workout and posing workshop at The Arena SG.

Miss Jun - who weighed 58kg when she was 13 years old - told The New Paper: "No one dared to bully me because I was the biggest in class.

"I used to eat non-stop and would eat any food that was placed in front of me. I could even finish one pizza on my own."

Currently single, she said that when she was 17, she wanted to be as beautiful as her mother.

Miss Jun said: "I decided to change and adjusted my eating habits.

"I made it a point not to open the fridge myself for three years and there was once when I even went two days without food."

Miss Jun was studying arts and design in university but her passion for fitness consumed her and she decided to switch her major to fitness education.

"At first, my parents did not approve... but after seeing my desire and effort to become a fitness model, they are now very supportive of the career path I chose," she said.

"Since the day I decided to change my lifestyle, I have maintained (my figure). After I started exercising, my metabolism changed and even if I ate a lot, I did not grow fat."

But Miss Jun rates her fitness level a six out of 10.

"I compare myself to people in the fashion industry and am constantly training (to build up) my abs and glutes."

Her fitness regimen sees her working out six days a week, with two hours of weight training and 40 minutes of cardio training.

And as she wants to put on more muscle, she eats four small meals a day, consisting of rice, roast chicken, beef, oatmeal and sweet potatoes.

She hopes to some day launch her own fitness apparel line in Asia, one that is inspired by American lingerie brand Victoria's Secret.

She said: "(WBFF Asia) is similar to the Victoria Secret's Fashion Show and it's also trendy. It's like a fantasy for women to participate in a competition like this."

This article was first published on Mar 20, 2017.
Get The New Paper for more stories.