Look who's cooking: Kids turn on the heat 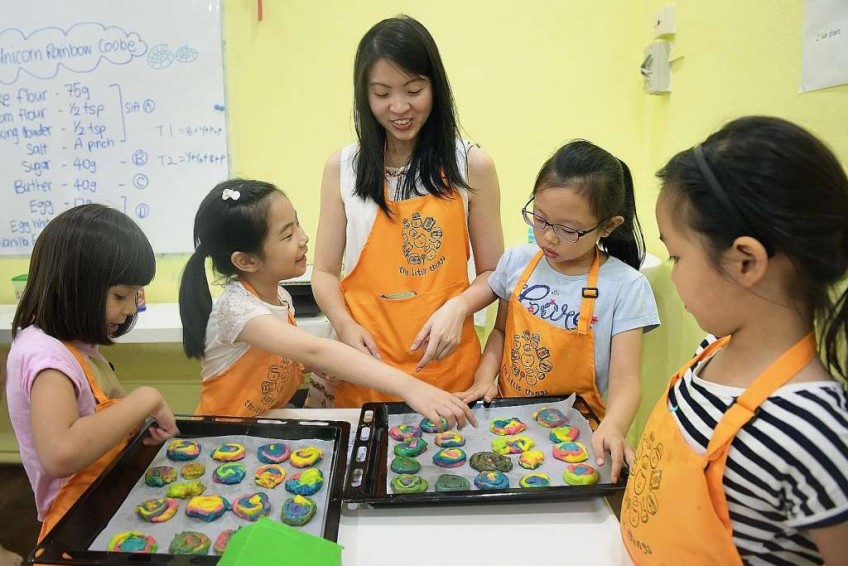 From Western dishes such as spaghetti Bolognese and carbonara pasta to Asian-style bee hoon and chicken rice, these are the dishes made by seven-year-old Chloe Teo for her family in the past year.

Her mother, Ms Catherine Tan, 38, a senior manager in IT, says Chloe, who is the middle child between two boys, shops for groceries with her, prepares the raw ingredients and cooks them.

"She is in charge all the way," Ms Tan adds.

Chloe's culinary enthusiasm is fired up by cooking school The Little Things in Upper Thomson Road, where she has been attending weekly classes since she was four.

At first, her mother had wanted her to build up motor skills, but she soon reaped other benefits, such as confidence and a sense of independence, and becoming "more willing to try new food".

Chloe is among a growing group of little chefs, some as young as two years old, who are attending regular classes at cooking and baking schools here.

Are they planning on a super- early start to being little Gordon Ramsays and Nigella Lawsons? Not necessarily.

The kid cooking boom is fuelled by parents who want their children to have basic kitchen skills in a society where domestic helpers and eating out are common.

Organisers say popular TV shows such as Top Chef, MasterChef and its spinoff MasterChef Junior, have also contributed to the demand for children's culinary classes.

Given the fiery stoves and sharp knives and a thousand other things that can go wrong for children, these cooking classes need to be customised to minimise dangers in the kitchen.

For example, at The Little Things, one of the few cooking schools here to focus solely on children, child- sized tools such as peelers and whisks and practice knives with blunt edges are used.

Its teacher-to-children ratio is one to five. When the little ones are using stoves and ovens, there is one-on-one supervision.

Founded in 2013 by former early childhood educator Emily Yeo, 30, and her college friend, Valerie Lee, 30, the school's main programme is the Self-Savvy Programme.

This is held every week for two hours for children aged four to 12. The classes span an eight-week term and each term features a different theme, ranging from dishes made with herbs to cuisine around the world.

Ms Yeo says: "As a former childhood educator, I noticed that children were losing touch with cooking and kitchen skills.

"We believe cooking is an essential skill every child should have."

Each of the four weekly classes under the Self-Savvy Programme used to draw about two to four children. This has since grown to eight to 10 children a class.

The five-day holiday cooking camp called Super Chef at Camp Asia, one of the largest holiday camp operators in Singapore, has drawn more than 1,000 children in the last five years. Some are repeat customers.

About 30 per cent of participants have done two chef camps while another 10 per cent has done three or more such camps.

Sometimes it is the parents who are inspired to groom their children's culinary skills, but more often than not, it is the children who ask to attend classes, says Mr Jeremy Ang, 29, .

In response to such growing demand, cooking schools that used to cater solely to adults have also started junior departments.

For example, the 11-year-old Creative Culinaire The School started running cooking classes for children aged six to 12 during school holidays eight years ago.

Held during school holidays, this is a five-day programme for children aged seven and older.

Over the last two years, the school has also offered parent-child cooking classes on some weekends.

Managing director Lynette Foo, 45, says demand for the kids' classes has grown by 20 per cent over the years.

About 200 children signed up for classes last year and about 25 per cent are regulars.

But how early can a child start in the kitchen? For Ms Yeo from The Little Things, it is never too young for children to pick up cooking and baking skills.The key is to keep it simple and full of play.

She says: "Once a child can walk, his food and can manage simple kitchen tasks, such as stirring, mixing, pouring fluid from one container to another or peeling fruit such as bananas."

The Little Things is planning to hold its ad-hoc toddler-and-parent workshop once a week as there is a demand for it.

Mrs Cheryl Yeo, 37, a vice-president in the banking industry, is looking forward to this. She has taken her toddler, aged 26 months, for three such workshops at The Little Things since she was 20 months old.

She says: "Carrie's more confident handling kitchenware and is more interested in exploring the kitchen and often re-enacts the sessions in her pretend play."

Where to learn cooking

This cooking and baking school for children has a weekly Self-Savvy Programme for those aged four to 12.

The programme runs for eight weeks. It also runs other ad-hoc programmes such as one for parents and toddlers.

This school runs classes for adults and also offers cooking and baking classes for children aged six to 12 during school holidays.

There are also classes for both parents and children.

Aspiring chefs can take part in a junior chef competition at the end of the year.

The event is judged by industry professionals.

Camp Asia runs Super Chef during the international school holidays for children aged six to 16. This is a five-day camp, lasting six hours each day.

A highlight of the camp is on the last day, when children get to run their own "restaurant", wearing a chef's jacket, hat and apron.

They take orders from their parents, cook at their assigned station and serve their parents the food they cook.

Founded in 2005 by chef Lynette Foo, 45, this school initially offered classes for adults only.

Five years ago, it also started the Junior Culinary Bootcamp, a five-day programme for children aged seven and older.

At the end of the camp, parents are invited to sample a meal prepared by the children.

Hungry Mummies was founded three years ago when mother of two Penelope Foo, 35, started running cooking classes for adults out of her condominium at Bukit Timah and at clients' homes.

Last year, upon parents' request, she also introduced customised cooking or baking classes for children, sometimes with their parents, on an ad-hoc basis and during school holidays.

Cost: From $50 a child for a group class of two or more. For children aged four and above.

While this is largely a cooking school for adults, founder Ruqxana Vasanwala, 55, welcomes students to bring their children for classes.

She also runs two-hour classes for children aged four and above on an ad-hoc basis.

Some are organised to celebrate a child's birthday.

In her "cook up a story" class, she would read a story to the children first, before getting them to "bake" or "cook" an element in it, such as baking a gingerbread man cookie after reading the Gingerbread Man story.

Where: A private house in Siglap