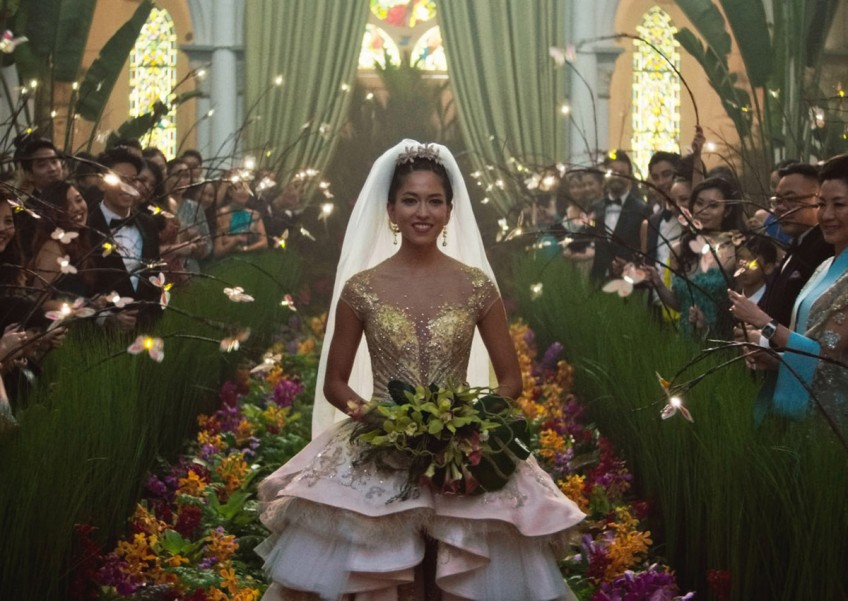 When it comes to portraying an absolutely decadent and over-the-top glamorous lifestyle, there is one thing you just cannot ignore - fashion.

In Hollywood hit Crazy Rich Asians, it is the dresses and suits that often catch the eye. And among the ones that helped in dressing some of the characters are none other than our very own Malaysian designers.

While labels like Prada, Bottega Veneta and Dior played a big part in the film, it is the local names below that make us so proud.

Here's what they have to say about having their creations featured in the film.

Carven Ong, renowned for creating clothes that personify elegance, was recruited by the film's costume designer Mary Vogt to bring her designs to life. It was Ong who crafted the unforgettable wedding gown worn by Araminta Lee (played by Sonoya Mizuno).

"I'm honoured and surprised by this great opportunity given to me to execute the vision and inspiration by the costume designers. It was a golden moment for me to introduce my work to the world," he states.

Ong points out that it is truly a journey of perseverance for Asian designers, as most Hollywood movies are dominated by Western names because of their market share in the world. Yet, he says this is changing.

"With the growing success of Asian designers conquering the world stage such as Alexander Wang, Thakoon and Rei Kawakubo. I am pleased that our Eastern representation in fashion satiates the taste of the evergrowing globalisation."

When it comes to feminine, ultra-luxe clothes, there is no one quite like Alia Bastamam. As put by former editor-in-chief of Elle Malaysia Andrea Wong, who Vogt enlisted for help, "her dresses are really romantic and feminine - drapey silk and dreamy silhouettes".

"When I was offered to have my designs appear in the film, I was already ecstatic. So to be able to catch glimpses of my clothes on the big screen was surreal," Alia says. "A film like Crazy Rich Asians doesn't happen regularly, so it's such a great platform to have a Hollywood film promote Asian designers."

She points out that fashion is so global these days. According to her, the differential lines are being blurred so much and it's hard to say there's anything different between Asian and Western fashion preference.

"Asian designers in the global fashion industry is increasing in numbers from a time when the only Asian designer anyone could name was Anna Sui. Now we have Jason Wu, Alexander Wang, the couturier Guo Pei as well as our Malaysians Han Chong (of Self-Portrait) and Farah Khan."

For the men of Crazy Rich Asians, the dapper look is not "dresscode optional". Local suiting brand Lord's Tailor helped in this regard, whereby Charlie Wu (Harry Shum Jr.), Astrid Leong's (Gemma Chan) ex-fiance, is seen wearing a sleek navy blue tux in one of the final scenes in the film.

"To be able to represent Malaysia for the menswear department has given us the courage to believe that Malaysia and Asian fashion can shine in the international arena. It shows that our quality and style can be on par with international designers," notes creative director of Lord's Tailor, Kenny Loh.

Loh adds that it is a watershed moment for not just Asians worldwide but also the fashion designers of Asia. He says a custom touch to fashion has always been a key component of Asian men's fashion and this was definitely showcased in the film.

"It was such an honour to be invited to be part of this pivotal project not only for Hollywood, but it has stirred hearts worldwide. Seeing our clothes appear in the film makes us immensely proud of how far our brand has come in terms of tailoring heritage."

For Khoon Hooi, Crazy Rich Asians is one way to address the lack of diversity and representation in Hollywood. He feels that the global fashion industry has to take heed, and not ignore the bright and wonderful Asian designers.

"Look at the talent and innovation displayed by the likes of Maison Rabih Kayrouz, Guo Pei and Chitose Abe of Sacai, as well as Rejina Pyo and Laura Kim - one half of the creative duo behind Monse and Oscar de la Renta!"

To him, Asian consumers often desire new things or ideas. However, in terms of the designers, Westerners can be considered experimental in creativity, while Asian creativity is very rooted in cultural aesthetics.

Most of Khoon Hooi's pieces are seen during the film's grand wedding reception, of which he says: "It is undoubtedly a big moment for us to be given an opportunity to showcase our Autumn 2017 collection on a big international screen."