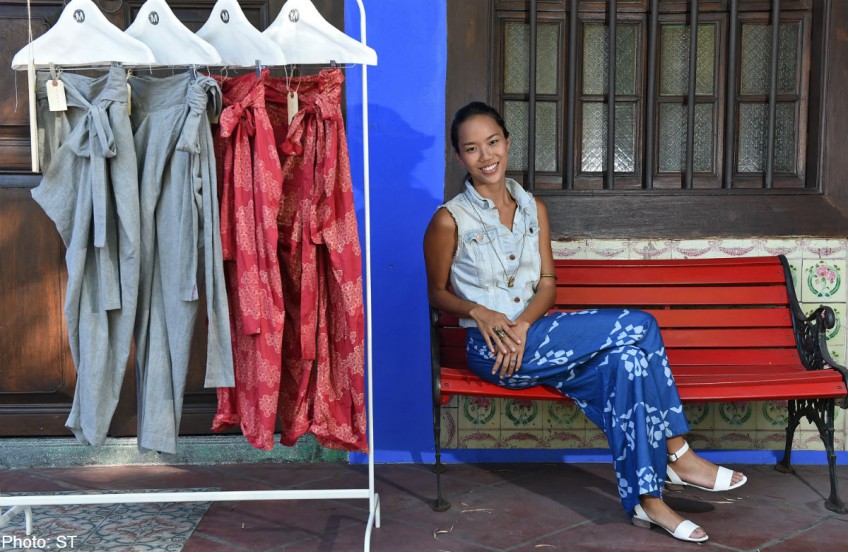 Ms Ho Renyung, co-founder of home-grown pants label Matter. She is wearing the Classic Wideleg pants from her brand.

Matter, set up by friends Ho Renyung and Yvonne Suner in May, has been featured in the Italian and Indian editions of fashion magazine Vogue.

The Smithsonian Museum in Washington has approached Ho and Suner to sell the pants, made by artisans in India and featuring traditional block-printing, at the retail stores of its museums of Asian art - the Freer Gallery of Art and the Arthur M. Sackler Gallery.

It seems like Ho and Suner's belief in "doing one thing and doing it really well" has paid off.

The pair, who met six years ago while working in Mexico in hotel operations, decided to launch a pants label because "there is something still quite rebellious about a woman wearing pants", says Ho, 28.

They also wanted to create an alternative to jeans, leggings or harem pants that are usually worn when travelling, which is why Matter's tagline is "Pants To See The World In". The pants are sold online at matterprints.com.

The duo picked the name "Matter" as they wanted something "inclusive, that connects all of us and is about going back to basics".

Ho chose to manufacture the label in India after falling in love with the country's artisans and textiles during a trip there last year with her husband, Adrien Desbaillets, one of the founders of salad chain SaladStop!.

The pants, which are designed by Ho and Suner in collaboration with designers and artisans, are made of hand-loomed cotton, which is softer than machine-manufactured cotton due to its looser weave, and silk cotton - a blend of 82 per cent cotton and 18 per cent silk, which is machine-washable and breathable. They are hand-loomed by artisans in Rajasthan.

The prints have roots in Indian culture. For example, one print is shaped like an iron spear made by the Gadia Lohar nomadic tribe in India. The print (seen on the pants Ho is wearing, above) still features on clothing worn by the nomadic Banjara community in Gujarat, where it is known as the Banjari print.

Printing is done at three blockprinting workshops in Jaipur, while a factory in Delhi manufactures the pants.

The designs do not have any zips. Instead, they have flexible closures like buttons and drawstrings, which allow the pants to be worn high or low on the waist.

Ho, who co-founded the now defunct collaborative workspace Kennel, declines to reveal how many pairs of pants have sold since the brand's launch.

It takes an average of 80 days to produce a single pair of pants because of the rural artisans' slower pace of life, but she hopes to step up on production by working with other partners.

She and Suner, who is from the Canary Islands and is based in Shanghai, publicised Matter through word-of-mouth and a newsletter that they sent out to friends and family in January.

Its customer base is split equally between Singaporeans and fans overseas, such as the United States, Sweden, Japan and Finland.

Ho, who invested 20 per cent of her savings in the start-up capital, says customers have told her they like the brand's philosophy, which is to know the origins of their clothing.

Every pair of pants comes with a card hand-stamped with the print or weave of the pants and the stories behind them. The card also states the locations where the pants were made.

Ho says the Smithsonian Museum likely got wind of Matter due to coverage from online magazines such as Cool Hunting and Conscious Magazine.

She says she does not have enough pants in stock to supply to the museum for now, but was "surprised and encouraged" after being contacted by it.

She and Suner plan to give a portion of Matter's profits to the artisans involved.

Ho would eventually like Matter to become a collaborative platform, where urban designers and rural artisans work together to produce items like suitcases combining leather and fabric, bags and shoes.

The label will launch a collection of scarves at the end of this year, in collaboration with local textile company Fictive Fingers.

She says: "Matter is a celebration of the amazing meanings behind traditional prints and hard work behind the textiles. It's about showing the world the beauty of heritage."

Samples of the pants are currently on display at lifestyle and design boutique kapok's flagship store at the National Design Centre (111 Middle Road, 01-05. Opening hours: 11am - 9pm daily) till Sunday.

This article was first published on July 18, 2014.
Get a copy of Urban, The Straits Times or go to straitstimes.com for more stories.