Miss Universe 2018 Catriona Gray has won so many accolades at just the age of 25, yet she reveals that it does not take much at all to achieve them.

Her natural gift of winning pageant shows was already evident when she was a toddler. At the tender age of 5, when most children are usually still learning to use spoons and forks correctly, Gray had already won the Little Miss Philippines Pageant in Sydney, Australia, the country in which she was born and spent her childhood and teenage years.

After finishing high school, Gray moved to Manila to become a commercial model. Gray's name then became a fixture of the pageant circle, but it was not until she was crowned Miss World Philippines 2016, in the process winning several awards and corporate endorsements, that she got on track to her current title. 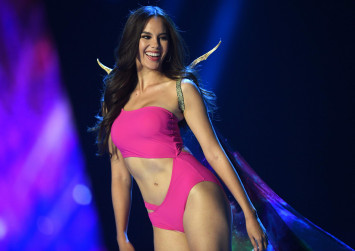 After her crowning, Gray went on to compete in the Miss World 2016 in Maryland, United States, where she placed within the Top 5 and also won the Multimedia Award.

Later on, she snatched the crown of Miss Universe Philippines 2018, along with awards in the national costume, evening gown and swimsuit categories.

Finally, in December last year, Gray competed in the Miss Universe Pageant in Nonthaburi, Thailand, where she immediately turned heads with her famous slow-motion "lava walk", even earning praise from supermodels Tyra Banks and Ashley Graham.

Despite Gray's many accomplishments in such a short period of time, she is keen to remind us all that she is just a regular person and she does not use over-complicated daily routines to maintain her beauty.

Instead, Gray does very simple things, such as:

STARTING YOUR DAY WITH A BIG GLASS OF WATER Our parents and teachers always teach us to drink at least two liters of water each day, but sometimes we overlook this simple yet important routine.

Gray always makes sure she has a big glass of water each morning to achieve her minimum daily intake requirements. At times, if she really needs to, she also drinks some coffee to really wake her up in the morning.

In addition, she always spends some time talking with her loved ones after her morning coffee.

USING A GENTLE CLEANSER IN THE MORNING

Gray said she washes her face with a gentle cleanser in the morning because she is usually quiet harsh when taking off her makeup the night before. According to her, this was one of her most important routines to maintain her beauty.

GOING OUTSIDE WITH CARE

Gray also never forgets to use light moisturiser and sunscreen before she goes out. When she is having a day off, she also wears minimal makeup to let her skin take a break from the heavy makeup put on her during photo shoots. Nevertheless, Gray said that at times, she loved experimenting with additional makeup that makes her glow.

"I love having fun with makeup. I love glitter, highlighters, anything shimmering," Gray, who also holds a black belt in Choi Kwang-Do, said.

PAMPERING YOURSELF AS MUCH AS YOU CAN

Gray constantly spends her time on the go and on airplanes. This makes her skin vulnerable to dehydration. To deal with this, she uses sheet masks and face masks, which she describes as her "favourite things ever".

She also tries to get into a spa or consult with a specialist once a month and, when it comes to her flowing locks, she explained that she often uses deep conditioning at home after a full day of styling.