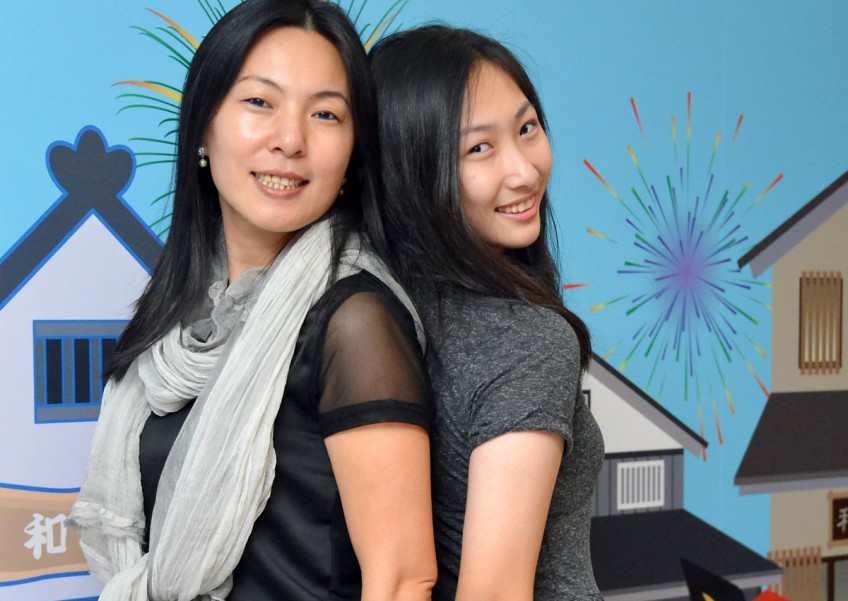 When asked to rate her daughter's singing, Madam Xiao Xiao smiled and bluntly replied, a two out of 10.

Yet, this mum is forking out two months of her income to send her 15-year-old daughter Xiaoyue to a K-pop boot camp - in South Korea.

The goal is for Xiaoyue to attend an audition held by some of the top entertainment companies there at the end of the boot camp, in hopes that she will get signed by them and realise her dream of becoming a K-pop singer.

It will cost a whopping USD$3,800 (S$5,300) to join the two-week boot camp, which is being organised by local entertainment company Big Boss Entertainment.

Because it will be held in Seoul, South Korea, Madam Xiao will also have to pay for her daughter's plane ticket as well as her own, as she intends to fly there to accompany her daughter.

Her total expenditure is expected to be more than $6,000.

She is making the sacrifice because Xiaoyue is her only child and the love of her life.

Madam Xiao, 39, a Singapore PR who came here from Dalian, China, with her husband 10 years ago, told The New Paper: "Since she was a baby, I have found Xiaoyue to be very special.

"She has great strength of character, I trust her completely.

"Singing and dancing are her hobbies and once she expressed interest in wanting to be a K-pop star, I gave her my full support.

"My sacrifice will be worth it because her happiness means the world to me."

On her daughter's lack of singing skill, Madam Xiao said that she hoped Xiaoyue, a Secondary 3 student at Bukit View Secondary School, will benefit from the training at the boot camp.

"My thoughts on this is that all I want is for her to give it a shot.

"The vocal coaches at the camp (who have worked with big names like Girls' Generation and Super Junior) I'm hoping can help her improve on her singing."

Madam Xiao said that her husband, who works in the shipping business, was not supportive of Xiaoyue's interest in pursuing K-pop as a career because he is "old school" and would like to see his daughter do something more "proper", like take on an office job.

But he has told Xiaoyue that he will not forbid her from joining the boot camp.

So Madam Xiao has taken it upon herself to be her daughter's sole cheerleader.

She intends to fly to South Korea with Xiaoyue and stay at a friend's house there until Xiaoyue completes the boot camp.

This is so that she can be there to help her daughter should she run into any difficulties.

Said Madam Xiao: "If Xiaoyue makes the cut, I will be very happy for her.

"If she doesn't, then at least she'll know.

"What's worse is that if she doesn't try, she'll always wonder about it. Thus I don't see this as me over-indulging her."

Xiaoyue, who is 1.69m tall and who turned up for the interview without make-up, looked pained when she heard her mum talking about her sacrifice.

She told TNP: "I feel bad that my mum is spending so much of her hard-earned money on me.

"We have a relationship that is different from most mothers and daughters. My mum is my best friend.

"In fact, the tuition centre she works at is next to my school so she even comes to watch me when I'm having my physical education classes."

Xiaoyue said that this may make other teenagers uncomfortable, but to her, it is a reflection of her mum's love and protective nature.

The aspiring jazz singer, who counts K-pop girl group 2NE1's leader CL as her idol, revealed that her mum has even helped her chase a boy she liked before.

"Last year, I told my mum I liked this boy in school so when he went for tuition at her tuition centre, she struck up a conversation with him and even bought him drinks.

"My mum hated him, but she still did it because that's how much she loves me.

"I never went out with the boy, but I am grateful for my mum's unwavering support.

"She's not over-protective, in fact, she likes it that I am a very independent person. She only gets involved with my life when I go to her for advice."

See also: 4 things parents can do to help their kids succeed

As for her dream of being a K-pop star, Xiaoyue is confident that she will make it through the two weeks at boot camp, which she has yearned to go for since she got wind of it recently.

Every night, she does half an hour of exercise along with sit-ups and squats.

The avid Korean drama fan is excited at the prospect of experiencing life as a K-pop trainee in Korea.

What about possibly meeting and falling in love with Korean heart-throbs during her stay?

Said Xiaoyue: "Honestly, I am not attracted to most of the members of K-pop boy bands because I find that they look feminine.

No parent wants to stand in the way of their child's happiness.

Dr Vanessa von Auer, clinical psychologist at VA Psychology Centre, said: "But is not healthy to indulge a child, especially if it is coming at a hefty price - not only monetary but also the child's sense of self-worth and identity."

Dr von Auer said it is unhealthy because it encourages the children to have an unrealistic view of themselves.

So where should parents draw the line? When does being supportive cross over into over-indulgence?

Dr von Auer said that as long as indulgences do not harm a child's development in the emotional, social and cognitive domains such as personality development and confidence, parents can allow their children certain liberties.

For example, if a child is interested in acting, the parent could allow the child to take acting classes as an enrichment activity.

But telling the child that he or she is fantastic at acting when it is not true, should not be done.

"Children need to be grounded and be able to adapt to varying situations, to be realistic about their strengths and weaknesses, and to be able to cope with truthful feedback."