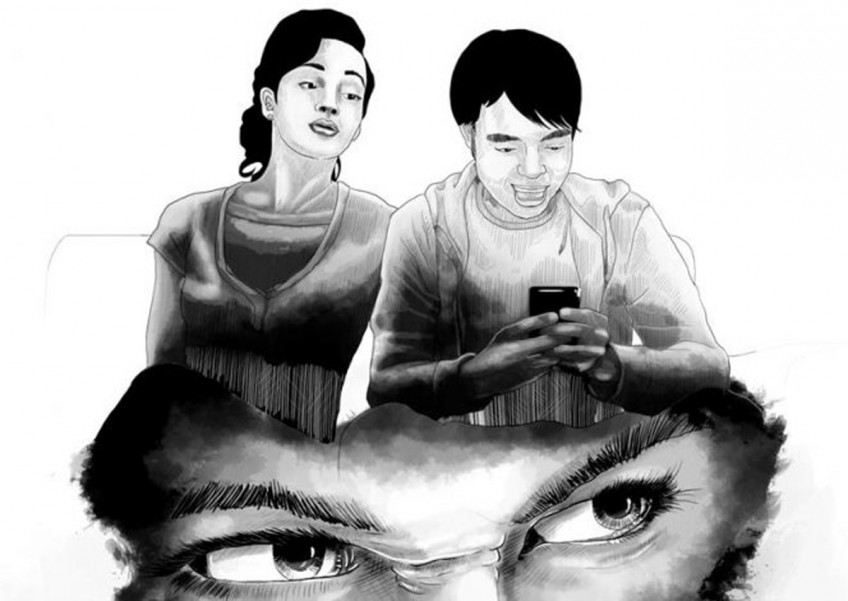 Can a woman trust her boyfriend if he keeps texting other women?
The Star/Asia News Network

"Dear Thelma" is a relationship advice column that appears in The Star, a publication that is part of the Asia News Network.

My boyfriend loves texting. He has many friends to whom he sends good morning texts. Most of them are females whom he says are friends. I am okay with him keeping in touch with his friends every now and then.

However I'm worried about his daily texting to a particular "girlfriend". I have guy friends too, but I don't text them every day!

We got to know each other about a year ago. I am the kind of person who believes that when two people decide to commit to each other, they share everything, including letting each other know their phone passwords.

However, he didn't want to share his password although I let him know mine. I didn't mind because I wasn't hiding anything and wanted to build trust. Months passed, and after several arguments, he did give me his phone PIN.

While randomly going through his phone, I found his texts to his female colleague. He sends them the moment he wakes up and after work. He is flirtatious. When I confronted him about it he was defensive and said she was just a friend, that I don't trust him and am making it a big issue when it isn't. Finally, he admitted that he probably shouldn't have texted her that way.

When he went overseas for work, he invited me to visit. While I was there, I found out that he had been texting another colleague of his day and night. He also told me she was just a friend and that I was making a big fuss.

He said if he didn't love me, he wouldn't have invited me over for a holiday.

Their texts are usually just chit-chat and sometimes she confides in him about her relationship problems indirectly. When we are together, he updates her on everything we do, like where we are and he sends her pictures of food and places we are at.

As usual, he says I'm at fault, that I don't trust him and I'm not grateful for all the things he had done for me. I decided to get a few of my girlfriends' opinion on this matter. I took one piece of advice and texted my boyfriend to reduce the frequency of chats with his female friends.

He replied with: "I'll try and I don't know why this is a big issue".

He tells me that texting friends who are girls every day is normal. He says I shouldn't feel insecure because he is not cheating on me. It doesn't seem like he will ever change.

For me, frequent communication is key in a relationship. It brings people closer (not necessarily physically, but certainly emotionally). In my life, I have seen too many situations that lead to people cheating on their partners intentionally and unintentionally.

I feel like he still doesn't understand me. I have shared with him the possible reasons for my insecurities, yet I don't think he is willing to make an effort to put me at ease. Sometimes, I wonder if I'm being unfair expecting him to change to help me with my trust issues.

Am I worrying for no reason? Can someone build trust by themselves without help? If yes, how do I do it?

- Confused to the Core

Dear Confused to the Core

When two people enter a relationship, they don't cease to exist and meld into a single person. Each person commits to the other, but they also have the right to their own lives. This includes maintaining old friendships and making new ones.

As a relationship means commitment, there are grounds for talking to a partner if you feel there is a sexual attraction. This does not mean giving ultimatums; it begins with an open and honest discussion together.

Some people decided at the end of such a talk that their fears were unfounded while others are happy if the friendship is cooled a little. In cases where the fear persists, a loving partner might agree to give up the friendship as it's hurting their partner.

But that's not really the case with you, is it? I think you need to look at your own behaviour here.

You say you want to build trust, but you don't display any. You demanded access to his phone, and when he refused, you nagged at him until he gave in. That's bullying and it's unacceptable.

Once you got your way, you promptly went through his texts. Again, this is unacceptable. Everyone has a right to privacy. You behaved as if you were a prison guard tossing a cell.

You then interrogated him over his friendships, accused him of all kinds of bad behaviour, and essentially demanded he stop talking to anyone who is female.

When he refused to give up his friends, you got your girlfriends to help you gang up on him and manipulate him.

My dear, you are not confused; you are trying to control his behaviour. And when he objects, you do whatever it takes until you get your own way.

You don't seem to realise that your behaviour is toxic and this worries me very much. As it is, you are making yourself miserable and I suspect your boyfriend is miserable too. I urge you to make an appointment with a therapist immediately. Find one who specialises in abusive behaviour.

You need to figure out the following. First, you have a very negative view of people. What lies behind that? Understanding where you are coming from is very important.

Second, what are your other relationships like? Learn lessons from other parts of your life, and use them to help yourself.

Third, you need some psychoeducation to help you understand how healthy relationships work. Make a list of issues that you need to work on, and find solutions that fit you.

Look, I'm sure that this reply will come as a shock to you but please take heart. Reading between the lines, I suspect there are some dark things in your past that need to be addressed.

This won't be an easy journey for you but I think it's essential for your happiness. Be brave and take the plunge. I'll be thinking good thoughts for you.