The myth about eggs, peanut-based snacks 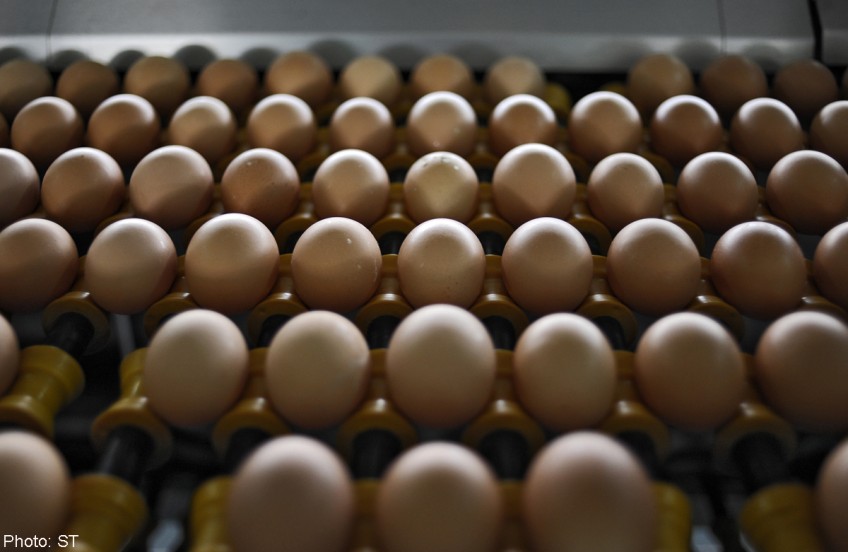 Most parents should not avoid giving allergenic foods such as eggs and peanut-based snacks when they introduce solid foods to their babies at four to six months old, doctors here have clarified.

They estimate that a third of new mothers and fathers express fears that giving their child these foods at such an early age could cause allergies. However, they say research shows this is a myth.

"Introducing allergenic food later has not been shown to reduce allergy to these foods," said Associate Professor Anne Goh, head of the allergy service at KK Women's and Children's Hospital (KKH).

Dr Soh Jian Yi, who specialises in paediatric allergies at National University Hospital, said: "It is time to put the myth of delaying the introduction of allergenic foods to bed. Most babies will not benefit from that."

Parents can introduce eggs and peanut-based foods within weeks after common first foods such as vegetables and fruit are tolerated, affirmed Dr Liew Woei Kang, who specialises in paediatric allergies at Gleneagles Hospital.

American paediatric guidelines changed seven years ago when preliminary evidence showed that exposing babies to allergenic foods earlier could reduce risks of developing an allergy. Before that, they advocated delaying the introduction of eggs until age two, and peanuts and shellfish until age three.

But new research suggests otherwise. In a British study published last month in the New England Journal Of Medicine, researchers concluded that eating peanut- based products actually prevents vulnerable babies from developing an allergy to them.

Doctors studied over 600 babies as young as four months old who had developed severe eczema - an early warning sign of allergies. Some also had egg allergies.

A growing pool of studies also suggests that similar results could be achieved with other allergenic foods such as eggs and cow's milk - the more common food allergies among the 5 per cent of children here who have them.

Dr Soh said: "The basic mechanism of building up tolerance should be similar."

Ms Anna Teo, 36, has heard both theories. "My mother-in- law told me to avoid nutty foods till my son was two or three... But I read up, checked with doctors and went ahead at 10 months. I wanted to give him the best nutrition. But perhaps some parents prefer to err on the side of caution."

Allergies are a growing problem in Singapore. Five years ago, Dr Soh saw only one or two new cases a week. But now he sees twice that number. KKH sees about 1,000 new cases a year.

Dr Soh recommends that children with eczema who scratch often or get new rashes should see doctors before eating highly allergenic foods since they may be more susceptible.

If parents suspect an allergy in which a child has rashes, lip-swelling or dizziness after eating a certain food, they should avoid the food and consult a doctor.

If a child has a peanut allergy, the risk of one occurring in their siblings is seven times higher, Dr Soh said. Such children might want to try peanut-based foods under a doctor's supervision.

Though peanut allergies affect less than 1 per cent of children here, they are among the most persistent, with only one in five growing out of them. Four in five outgrow allergies to eggs and cow's milk.

Homemaker Althea Parker found out that her nine-year-old son Miles had a peanut allergy when he was 18 months old.

The 38-year-old, who had been brushingMiles' teeth after handling some trail mix containing nuts, recalled: "He started pursing his lips strangely and he coughed persistently. I knew immediately that something was wrong."

Miles had an egg allergy and eczema, like many of the babies in the British study.

"Knowing what we do now, that peanut exposure might protect at-risk babies, I may have asked my doctor about it," said Mrs Parker, an American expat living in Singapore. "But back then, I was taking it slow because Miles had other allergies."

Knowing that peanut allergies can be lethal, she would expose him to peanut-based foods again only after following doctors' advice.

Back in the United States, Miles had been exposed to peanuts accidentally when a restaurant's staff did not wash utensils properly before cooking for him. "To see your child start with an itchy tongue, then develop hives and scratch all over, and progress to laboured breathing is an extremely scary and helpless feeling."

Mrs Parker always takes an emergency kit containing medicine to treat anaphylaxis everywhere she goes. "I always pray for the medicine to work in time," she said. "Restaurants need to take allergies seriously."

After a few bad experiences, the Parkers now prefer to eat home-cooked food. If they do eat out, they do so only at a handful of restaurants, where the chefs know their requirements.

Miles has outgrown his egg, soya, wheat and fish allergies and Mrs Parker added: "Maybe one day he will outgrow his peanut allergy and eat out without inhibitions."