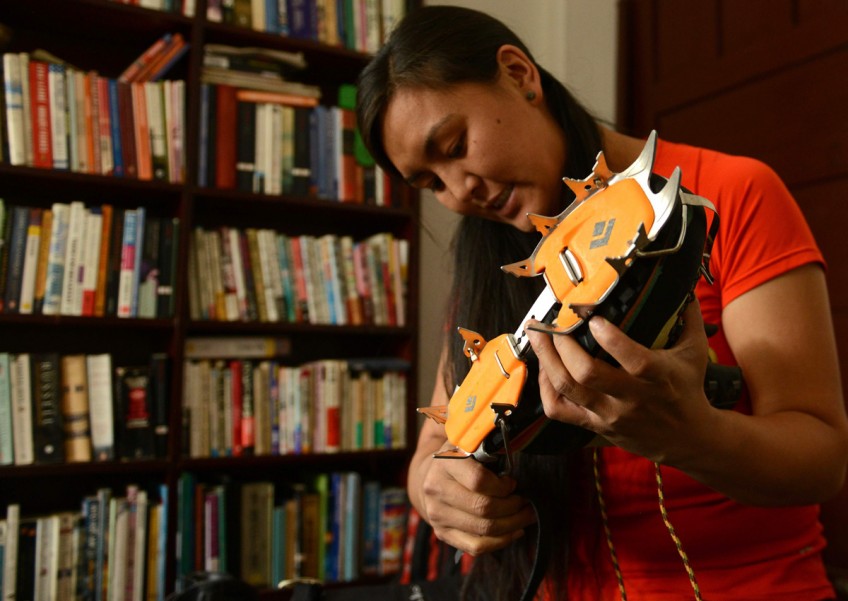 When a deadly avalanche hit Mount Everest a year ago, Pasang Lhamu Sherpa Akita, one of the few Nepali women with expertise in climbing the world's highest peaks, headed straight there to help.

A gifted mountaineer who had summited Everest by the age of 22, she is part of a new generation of Sherpa women who are climbing peaks that have traditionally only been scaled by their men.

"People think mountaineering is a man's job, but I think we need more women in the mountains," the 31-year-old said.

Generations of men from Nepal's famed Sherpa community have climbed the Himalayas, while their wives and daughters have traditionally kept the home fires burning.

But in a sign of changing times, a string of Sherpa women are now breaking records themselves, not only on 8,848-metre (29,029-foot) high Everest but other dangerous peaks.

Some are now planning new summits during Nepal's spring climbing season, which started this month.

"Sherpa men train their sons to climb, not their daughters, they are expected to stay home," mountaineering expert Elizabeth Hawley told AFP.

"These female climbers are certainly breaking tradition, which takes some courage." In the year since Nepal's massive earthquake, which triggered avalanches and landslides that killed almost 9,000 people, they have also led rescue and relief efforts.

"Everyone told me to stay behind, they said Everest base camp is gone, but I had to go," said Sherpa Akita, who was in a nearby village when the disaster hit.

Raised in the Himalayan town of Lukla, known as the gateway to Everest, she had long wanted to climb the mountain, inspired by the late Pasang Lhamu Sherpa - the first Nepali woman to summit the peak in 1993.

After her parents died, leaving her orphaned at 15, she worked on trekking expeditions to earn money. In 2004, she signed up for a local mountaineering course, where she was one of only two women in a class of dozens of men.

Sherpa Akita soon won a scholarship to train in the French Alps before returning to climb Everest. She also joined two Sherpa women and together they became the first female team to summit K2, the world's second-highest mountain, in 2014.

But her toughest test came when the 7.8-magnitude quake ripped through her country on April 25.

Sherpa Akita lost a friend in the subsequent Everest avalanche, her Kathmandu home suffered damage, and the sight of thousands of Nepalis huddling under tarps for shelter broke her heart.

She spent the next few months raising funds and travelling to remote villages to deliver emergency supplies and help run medical camps.

National Geographic magazine named her 2016's "Adventurer of the Year" for her efforts, the first Nepali woman to win the accolade.

Although Sherpa women have faced a long wait for their turn in the mountaineering spotlight, they are making up for it by snatching world records.

In 2012, Chhurim Sherpa became the first woman to scale Everest twice in one week, while 42-year-old Lhakpa Sherpa holds a record for the most Everest summits by a woman, with six.

The daughter of a yak herder, Lhakpa Sherpa worked as a porter and kitchen hand on trekking and mountaineering expeditions when she was young, before climbing solo.

"I felt free up there, I found ordinary life much more difficult," she told AFP, referring to a years-long violent relationship that saw her eventually retire from climbing.

The mother-of-three is now preparing a comeback - 16 years after she first scaled Everest - determined to summit the mountain twice in a single season.

Eventually, she wants to beat the record held by male climber Apa Sherpa of 21 total summits.

Despite such feats, women say they continue to face an uphill battle in a male-dominated industry, including securing funding for their expeditions.

They have made 33 attempts to scale Everest, compared to 2,923 bids by Sherpa men, according to the authoritative Himalayan Database.

More than a year after Pema Diki Sherpa and her team became the first all-female expedition to summit the highest mountains on all seven continents, they still need to pay back a 10-million rupee ($95,000) loan.

Like others, the 28-year-old has temporarily set aside her climbing ambitions and financial concerns and thrown herself into relief work in Nepal, monitoring aid distribution in devastated Dolakha district.

"People had no food, nowhere to live, no access to roads because of landslides. It was very sad," she said.

But they plan to return to the peaks, if not this climbing season, then the next. "Once you begin climbing, you can't stop. The mountains are an addiction," Sherpa Akita said.