No, my mom is not "JUST" a housewife

When I was younger, I distinctly remember writing on a piece of paper: "I will never be a housewife." I was a d*** - not because I had career aspirations, but for what I see now is its implication on the way I saw my mom.

My mother is many things. I know it shouldn't define her, but the truth is, "housewife" is one of those that instantly come to mind when I think about her.

But she wasn't always like that. My mom used to be an accountant. She and my father actually graduated from the same college. She worked immediately at a corporation in Makati. But shortly after I was born - their third child - she and my dad decided that it was best if she stayed at home. My dad isn't the villain here. They were both victims of what society deems as the "normal" family structure. So there was no question as to who between them would stay at home, and who would continue their career.

I'm sure at the back of their minds, they kept the possibility that eventually she would go back to work. Maybe when the three of us got a little bit older. But soon, three became six. And so it got harder to manage the household. Before she knew it, my mom spent most of her life toiling after us, and making sure our needs were met.

Now that we have grown, and the household can more or less run itself, we have suggested that she go back to work. But she rightfully points out that she's 50 now, and out of the job market for more than two decades. It's now hard for her to find a job. 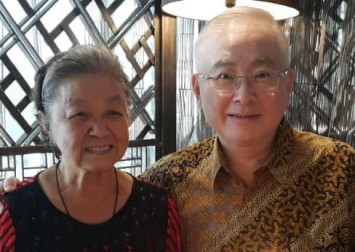 Of course I can't really say for sure how she feels about how her life has turned out, but from our conversations, I know she thinks of what could have been. Sometimes, when I talk to her about what I want to do in life, I can see she's glad that I am ambitious. Beyond the innate feeling of a parent being proud of her child, I sometimes can't help but think that maybe, she feels as if she's living vicariously through me. After all, I'm her only daughter.

I am ashamed to say it now, but in the past, I admit I have looked down on her. When I need something from school, or when I discuss politics and other "worldly matters," I go to my father first because I automatically assume he knows more about it. Whenever I write "housewife" under "Mother's Occupation" while filling up forms, there is this subtle feeling which I can only describe as discomfiture.

Additionally, I admit I'm sometimes visited by this feeling of pity for her. She's a strong, proud woman, and I know she wouldn't want it. But I can't help it. There's this thing I always do where I imagine her day. She wakes up really early in the morning to help us scramble to our jobs or to school. And now that we don't have help anymore, she literally does everything: cooks, cleans, does the laundry, and everything else. I admit there are times we take her for granted, as her work goes unappreciated.

The first time this truth really hit me hard was in college. I took a course titled "The tradition of women's writing in Anglo-American Literature," and one of our topics was about matrilineage. We were required to read In Search of Our Mother's Garden by Alice Walker. The essay was basically about how Black mothers and grandmothers of the past had to labour pretty much their entire lives. While many of them could have been great artists, poets, and literates, they instead were buried in history.

As we were discussing this, one of my classmates cried as she shared with us that the same could be said about the women in her life. I remember looking around our small class, composed of all females except for one, and saw many others nod in agreement with their eyes teary-eyed like mine. So I know my mother's case is not unique. Sadly, most people don't really realise the significance of their mother's sacrifice for them.

Truth be told, I still see my mother as a "housewife." But now that has become something I'm proud of. I am aware the stigma that being a housewife is degrading exists - I am among those who previously subscribed to this belief. Society has taught us to believe that men do the difficult job, meanwhile, the women are left with the "trivial" stuff. When in fact, household management is not an easy task. To be completely honest, it scares me. Sometimes I think, if that's what it means to be a mother, then I don't think I can do it.

To be completely honest, I still don't want to be a housewife. But if I ever do become one, I would see it as a great challenge. I wouldn't look down on myself - and I hope my future children won't too. We all choose our paths, and this one could be just as fulfilling as any other. So to all the homemakers out there, please know that what you do does matter. You are important and we appreciate you. Happy Mother's Day!